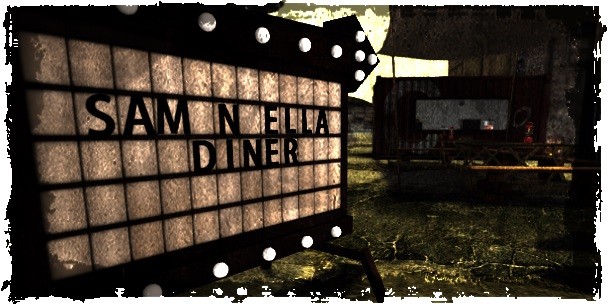 Yesterday was an easy morning. Woke up, got dressed, headed on out. Tried scavenging a little bit. Found a whole lot of nothing.

After taking a turn about town, dropped by the shelter to see what could be done. Erica was off behind a screen, getting checked out by a nurse. Sea was there, standing in the lobby, with a man I ain’t ever seen before. Had a dog with him too.

Max is what the new guy called himself. Dog was named Rocket. Comes from Australia, he says. Comes off as a drifter. Odd jobs don’t seem like anything new to him.

Sea and I showed him around the place. Kinda got the impression Max was just there to check it out. Don’t think he’ll be staying with us long. Said he would probably stick around town for a couple weeks, maybe a month. Maybe more if he found a good reason to stay.

Max and Rocket took their leave shortly after the tour. Just Sea and I left then. Got to talking about Erica and drying the meat. Told him how she wanted a share of it all and some water as well. Sea seemed real cautious about the whole thing-didn’t want it to be too expensive a venture. Erica didn’t really say yes or no to the terms I gave her. So, if she gets it down, she’s gonna get the original offer: two water bottles and a share of meat.

Speaking of what’s owed, Sea gave me a whole jug of water for working in the shelter. Looked to be about six bottles worth inside. After Sea went on his way, I done took that bottle home. Had a drink. Good timing this came my way. Was completely flat out of anything to drink.

Went poking around the main street of town for a bit. Didn’t find anything at all. Traffic’s so usual there, that anything dropped gets picked up before long.

Dropped by Sam n’ Ella’s diner. Thought I might get a snack. Didn’t end up that way though. Got a bit too chatty with Mia behind the counter. We talked about a whole lot of things, but it was all concerning this island. Threats to the island, namely: bandits, mercenaries, raiders. We’re in no shortage of danger here. She seemed pretty anxious by it all, but was more than willing to come guns a blazing if trouble ever turned up.

There was another woman there, as Mia pointed out. Quiet girl, small little thing. She was new. Invited her to the shelter, but she wasn’t having it. She’s got some past trauma dealing with authority. Don’t like small spaces. Weird, but okay. Said goodbye to everyone and then just headed back to the shelter.

Had just said hello to Tanner, and turned in my wrench, when Lena came out the door. She quit. She done quit the hospital. Something about how she didn’t like the color of the scrubs they got everyone wearing. That’s what she said at least. I ain’t too sure I’m buying it, not with the tangent she went on about afterward. Was something about school, daddy’s money, stripping lessons then said. I don’t know, really. Was real hard to follow along.

Remembered Lena said she had lost a backpack. Didn’t find the one she lost, but offered up the one I found the other day. She took it and was pretty insistent on paying me for it. Tried to the offer down, but she won out in the end. Earned $30.

Lena said getting eaten alive would be worse. Maybe it would. At least you’d see that coming though. A random shot to the head’s just so very anti-climactic.

“Take care pf yourself, Ben. You’re one of the good ones,” Lena said to me before she moved on. I pretty much said the same thing to her.

Entered the lobby and came upon a scene. Two doctors sweet talking each other behind the desk. Felt like maybe I was intruding upon them, so I done just went on my merry little way.

Spent the rest of the day in the shelter. Mostly just kept to myself cleaning up the place. Crashed in the dorms. Plan was to stay here for our run out of town later this morning. Let’s just hope Vince and Sea are good enough on their word for it.

Heated up a can of artichokes in the kitchen. Ate it. Took a walk around town. Found yet ANOTHER clip of handgun bullets. I’m gonna need these today.

Back at the shelter now, and I’m just going to clean around a bit. Gonna do that while I wait for the others to show up.

+ 1 pair of sneakers (from yesterday, forgot to count this)

+ 1 sheet metal (from yesterday, forgot to count this)

+ 2 clips of handgun ammo (1 from yesterday, forgot to count this.)