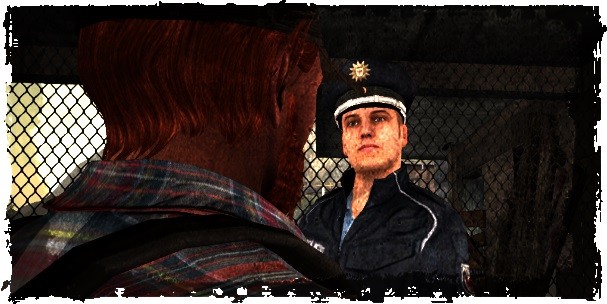 The shelter was pretty busy when I had arrived yesterday morning. Already there were a couple folks up there, including a dog! The dog just kind of laid against the wall, not bothering nobody. From the look of it, poor critter was hurt somehow. He weren’t such an unfortunate sight though, as someone from the hospital obviously tended its wounds. Someone I didn’t quite know, a woman, called for the dog and it followed. Tried to get it into the dorm with her, but it stayed behind.

People came and went between their dorms. Most of them I knew. They was all polite enough to say hello, though.

Took to cleaning the kitchen for a bit. Was getting my hands dirty washing dishes when someone new came to the shelter. Audra’s her name. Offered one of our welcome packages and said she could stay here for awhile. She wanted to pay. Told her we take donations, but she’s best keeping what she has for now. Showed her around the place: kitchen, dorms, bathroom. Seemed pretty grateful for the tour.

There was someone else there a bit later. He was a big guy with the name John Abrams Grim. Folks call him Jag though, so he says. Weird fellow. Just wouldn’t stay in place for very long. Kind of spoke up in the middle when everyone else was talking. Seems helpful though. When he offered Audra his cloak, that’s when I turned to go back to my kitchen duties.

I had seen someone just asleep on the table when I went in earlier. The clink of stacking wet plates must of roused her up. Learned her name’s Lena. She been her awhile. Had her back pack gone missing earlier. Said, if I happened to find one, I’ll give it right to her.

Maze came in then, limping. Looked like she had gotten hurt someway. She didn’t say how though. Seeing the dog, she immediate took a fascination to it. Two of them got along like a house on fire. She played with it long as she could, before heading off on her own again.

Kay came up soon after. Didn’t know she was there until she called out, “Who’s dog is this?” I didn’t know. No one else seemed to know. She made a point that she don’t mind animals around the hospital. Injured ones though, they’re more liable to be anxious and snap at folks. I can agree to that.

Jag offered to take up the dog as his own. Don’t think it was real willing to go along with the idea, though. Just let the whole thing sort itself out and I went back to cleaning the kitchen. Headed out to pick around after I was done in the shelter.

Decided to go picking around in them ruins not too far from the hospital. Wrench in hand, I nervously went up to its door. Put my back against the wall and peaked in to find two rotting corpses of police offers. By the looks of things, they been dead for awhile. Very likely they been walking around for a long time after that. Gave them two a look over and found one had a backpack that weren’t half-bad. Found a can of dog food in a pile of opened cans. Mine now.

Took a walk after that, just to get my bearings on the place. Walked the whole city proper before heading back home. Along the way, I picked up a few scattered boxes and bags. Ain’t got no furniture, so this is the best I can do to store my things.

Drank a soda, sat around the place, went to bed afterwards. Last half of the day wasn’t too exciting.

Woke up some time in the late morning. Got dressed and headed out. Saw some folks hunting in the woods, but I just left them be. Scavenged around a bit upon the hill. Today was some lucky finds!

Was just walking along when my shoe hit something and it skipped across the street. Bent down to pick up whatever it was and to my amazement, it was some ammo! Handgun by the look of things. I snatched that thing up with a quickness.

Took to the dumpster nearby and started digging around. Mostly trash. Was about ready to give up, when I noticed there was something hard and shiny on the inside wall. Just yanked that thing out and it made such a sound! Scraaaaaape! Once it was out, had a good look at what I found. Piece of sheet metal, but in mint condition. Who’d through this out? Well, whatever. One man’s trash is another man’s treasure. Carried it with me to the shelter. Propped it against a wall and then went to work.

Weren’t nobody around when I got there. Kitchen was still clean from yesterday. Thought maybe I’d just hang around outside for a bit. Got to chatting with Bo Tanner for a bit. Had just finished telling him my ‘wrong hole’ story when Maze approached.

Tanner just stayed silent as Maze and I talked. It was pretty much run the mill, “How you doing?” talk. She’s doing alright. Not too great. She’s got some aches and pains. Wasn’t limping like she was yesterday.

At some point, hunting came up. Didn’t take her for the hunting type. Especially didn’t figure Sin would get involved in it. By Maze’s word though, them two go out and hunt together. Invited me along and I took up the offer.

She also brought up something about maybe Keepers thinning the herd of dead out from the Fringe. If that happens, I’ll surely take up arms. Mostly, I avoid the dead when I can. If there’s a lot of folks hunting them down though, I’ll surely join. If they intending to clean up the neighborhood, I’ll definitely join. That’s where I keep all my stuff after all!

Maze eventually excused herself into the hospital. Was left with Tanner for a moment, just a real brief moment, before Vince appeared. He’s doing alright too. I believe him when he says that. When he headed on up to the shelter, I followed along to do the same.

Sea was there in the kitchen, sipping on some soup. Think maybe he might of burned his tongue on it.

Vince came in with breakfast and unloaded it onto the table: a banana and orange. Where’d he even get those? Seeing the food, it reminded me of the cat food I had found recently. As I recall, Vince has a cat. Handed that over to him and he was real grateful for it.

There’s a town quite a ways away, Ironwood Hills, that Sea brought up. Wants to head there for a salvage run some time Wednesday morning. I’m gonna join, help out pulling what I can. Need to remember to sleep at the shelter Tuesday night, so I’ll be woken up in time. It’s gonna be a dangerous run. We’ve got needs in the shelter though, so it has to be done. Hopefully it pays off.

There’s a few things we need to kick thing’s off. Truck we’re using might need some work. We could probably beef up its defenses a little. Gonna meet Vince tomorrow morning to look things over.

Question about weapons came up. Asked me if I had anything more than a wrench. I don’t. Fortunately, Vince is nice enough to land me his handgun. Perfect, since I found ammo for one just this morning. Vince walked off to do his own thing after that.

Would like a crossbow, though. They’re silent, don’t make a lot of noise. Guns may too much noise and attract everyone and their mother, both dead and alive. Intend to use the bow for hunting, guns for anyone alive that makes trouble.

There was another woman there, name of Raven. Looked like she been living the apocalypse life for awhile. Sea seemed real interested in seeing if he could buy a bow from her. They got to talking about hunting for a bit.

Sea had just asked me how finding someone to cure out meat was going when Erica walked in. She had an interest in doing the job, so that she might stay useful. Seemed real coy about all of it though. Was kinda like she was playing us along for it. Told her, could always find someone else to do the job. Might go to the Eights to see if anyone could help out. After asking her point-blank again, she was into taking up the task.

Erica hadn’t been shown around the place just yet. Sea was heading out with Raven to hunt, so he put me to the job. Showed her around, showed here where everything is. Took to the bathroom as soon as it came up. As she was washing herself up, I took my leave.

Dug through the dumpster in front of that old garage. Had to get pretty far in there to find an unopened can of orange soda. Dug a little deeper and find a pretty battered looking shoe box. Shook it, and could tell something was in there. After popping open the lid, found there was a pair of brand new sneakers in there! Don’t look to have ever been worn. Gonna keep a hold on these, but not for myself. They’re bound to make someone real happy. Wonder what I could get out of them.

On the way back home, drank that orange soda I found. Ate a bit of dried meat and just sat around the place. Added a bit more to this journal off and on throughout the day. Took a water break.

Headed back to the shelter for a time, just to poke around. Happened upon Lena examining a new person for the shelter. Minthia’s her name. Weird name. Bald head, bit of an attitude. Was a bit short with the nurse and pretty quiet with me. Got her to chuckle at a joke though. Might be a bit unstable. Have to keep an eye on her.

Took Minthia for a tour and happened upon Sin’s support group meeting. It was just finishing up. Folks went on their way pretty fast after it was done.

Asked Minthia if she had any questions. She didn’t. Ran off afterwards.

I headed down and out after that. Did some small chat with Tanner again and then headed home. That’s where I am now and it’s the end of the day. Sun has long since set. Shouldn’t of even stepped out when it was so late anyway. It’s stupid, crazy dangerous out here living next to the Fringe.