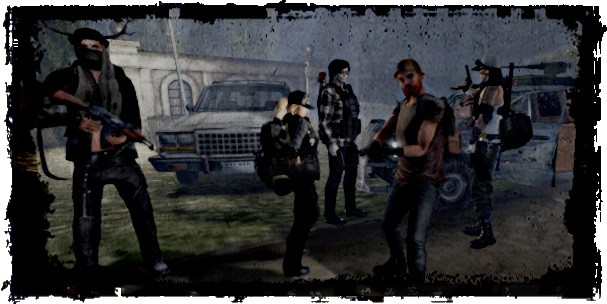 We killed a man today. Fat man in a pig mask. Crazy something fierce. Kept firing at us from above, on this balcony of an asylum. Used a shotgun.

The Ironwoods Asylum was creepy enough, as was the rest of the place. Looking at it, you wouldn’t think anyone was alive out there. Place truly comes off as some sort of black lands. Some sort of fallen, corrupted place.

Sea, Vince, Kay, and a new guy I ain’t ever seen before, Declin-we all came together. Came together by the way of some sort of Frankenstein machine. Thing’s pieced together with all kinds of different scrap. It’s a tank though. It’s something mighty.

Stopped in front of the old asylum. Split into teams: Declin and Kay went into town; Vince, Sea, and me explored that old building. Something about splitting up just made me wanna say, “Jinkies, gang!” like from one of them Scooby Doos. Folks took to it. Figured out I’m Daphne, cause of the red hair. Named Vince as Shaggy. It fit, as he went on about finding food afterward. Since Sea’s the man with the plan, he’s Fred. Guess Kay’s Velma, so that’d make Declin Scooby Doo.

There was this old creaky door, part of a stone fence, we had to pass through. Made quite a racket. Was for sure someone, something heard it. Turns out something did. Don’t know what Sea heard or saw, but he could tell someone was moving about.

Didn’t see who it was, until this big voice boomed from the balcony.

We all scrambled for cover, and that’s when the shotgun blasts occurred. We were pinned down behind a big wooden desk. I’m talking real thick here. Pig faced man blasted the thing, it splintered, but didn’t break.

Came up with a plan- split ourselves between wings of the lower hallway. I took one way, Vince took the other. Sea stayed behind at the desk. Eventually though, he rushed to take cover being this big Virgin Mary statue.

Ran as fast as I could, while keeping low. Found an office and hit the floor. Nerves took me for a moment. Could feel my blood pumping, heart beating out of my chest. Felt like I was gonna throw up, but it was just dry heaves. Just couldn’t bring up anything from my gut. Picked myself up and took a peek down the hallway. Looked clear. Gunshots and taunts were still going off from above.

This place still had power. Lights were on, machines were humming. This hallway before me had just one light on the ceiling. Raised my gun, pointed at the thing, and fired. Pop! Bullet hit the light and shorted it out. Now I had the cover of darkness to protect me.

In that hallway, I waited for the pig face man to come out again. He did, and shot right at Sea behind the statue. Stone pieces just flew everywhere! Heard Sea yelp. Thought for sure he was dead now.

This was my perfect chance though. I had already been aiming up there when I fired. The bullet struck, but did not kill him. Looked like it winged him, for the shotgun went off immediately after. Crazy noise came out of him. Something strange, something wild, something only an animal would make. This guy really didn’t seem human anymore.

Pig face man didn’t stop no, oh no. He flew into a rage and went charging down the stairs right at Sea! Thought maybe he was coming to me. If he had, I’d of run to the back of that hallway and unloaded a full clip into the man. That’d be a lot of bullets. This gun Vince lent me has room for 20 plus 1 in the chamber.

He didn’t come after me though. He went after Sea. Didn’t stand long though, not against the gunfire of everyone else. Don’t know who put in the final shot. Guess maybe it was either Kay or Sea. When I came out the hallway, pig face man was on the floor gasping with his last breaths. Sea didn’t just let things end there. He just started kicking the guy mercilessly. Wasn’t long until there wasn’t any breathing at all.

For a moment, it was like all the air had been sucked out of the room. All were excited, a bit anxious, but excited for the adventure when we first came here. We made jokes. Fooled around at the expense of others. Now though, there was just silence and exchanges of blank looks.

A murmur, some sort of a shuffle came from the upstairs. With that sound, we found life again. Scared, but alert, we all went on edge. Vince though, he went right upstairs to the source. BANG! His gun went off. Don’t know what he shot. Don’t wanna know what he shot. He came down though with a loaded duffle bag.

That point, we all split up. Kay and Declin kept to the lobby watching our backs. Sea headed down to surgery to see what he could find. I went back to that office I dived in earlier.

Medicine cabinet was locked. Tried to figure out how I could maybe pick it, but that didn’t last long. Didn’t have a whole lot of time. Took the easy way. Picked up a chair and smashed the cabinet’s glass. Just piled everything into my backpack.

Had just finished looting the room, when I heard Sea spilling his guts. All of us went on over to find him. All of us had our weapons drawn again. Didn’t know what to expect. From around a corner, Sea came out looking pretty sick. He wasn’t ill or nothing, he’d just found something real grim.

“He was kill them. Hundreds!” Sea said. “It’s an abattoir back there! Hundreds of them! We need to go!”

Left just right after that. No one talked on the ride back home. No one talked as we unloaded the loot into the hospital. When we were done, we just nodded, said simple goodbyes, and went on our way.

Shaky, dirty, nerve wrecked. I just walked back home without noticing anybody. Just plowed my way on through. Crashed and curled up in bed as soon as I could.

We were so very lucky to have come out physically unscathed. The effort though left us with a mental toll.

Didn’t look at what we grabbed. Medicine. Surgical equipment. We grabbed everything we could find. All locked up in the hospital now.