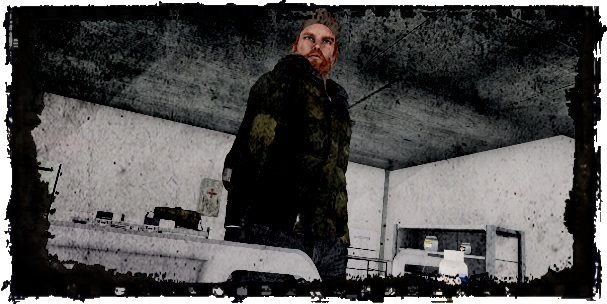 I don’t know what I’m doing with myself. Living, I suppose. Surviving. No, living. I’m passed surviving. I’ve an edge on most folks around here. The more I build myself up, I have to wonder something. What really matters anymore?

Is it the things we got to our name? Food, water, and shelter. Clean enough clothes on our backs, a sturdy pair of shoes, a trusty sidearm. A generator, a floor heater, a warm blanket. You get all this, you can breath easily. But, it’s not really enough is it? What’s it all worth if there’s just you, isolated and well fortified? There’s some things money just can’t buy.

You can’t buy affection from folks. That’s something you have to earn. Sure, you can get along from maybe a familiar lick from a foreign tongue. It’s not what you want, but it’s familiar enough. Can’t get buy respect neither. It’s not like you can just charge in, save the day, and everyone’s cool with you. It’s about keeping up appearances, responsibilities. My plate’s full on that. Let’s tackle those issues one at a time.

This isn’t easy to write. It’s not something I’d even say aloud to anyone. I’ve found a certain companionship with Dakota. Let’s not get too deep into it. It is what it is, and it’s fine. It works. We get around, go on runs, bring back essentials, come back. Usually come back in one piece. Last time though, that wasn’t the case. The boy got himself shot up pretty good.

Pushed me out of the way of an uzi’s oncoming bullets. Crazy bitch, Momma, those folks called her did it. I ended her though. Took a full clip and an extra bullet. And there’s the rest of that family too. Couple brothers, I think. Granpda. One by one, some way or another, they all got what was coming to them.

Tried to sneak around them best we could, but one of those fellows got in the way. Started going to Dakota with a twinkle in his eye. Put him down with a taser we found in that place; but, he eventually got up at the worst time to run away. That brought Momma’s attention, she fired, hit Dakota. She died after that. One of the other boys was outside picking off the dead. They got him. Dead broke through the door, got grandpa and I think some other prey they captured. Don’t know who it is, don’t care. Some woman is my guess by the screams.

So, one way or another, I killed an entire family. I don’t feel any remorse about it. They were in the way and pretty much pieces of shit from what I gathered. Guess they were raiding local places, looting, kidnapping who they could. According to their maps, they had their sights on Arklay. Not no more though, I guess.

Dakota, with the state he was in, we couldn’t make it back to Arklay in time. Tried best I could to patch him up. I ain’t real good at it. Bleeding stopped at least. Put a blanket on him, so he just wouldn’t freeze to death or go into shock. I don’t know how these things work. He survived though, and we managed to come back to Arklay eventually. Took awhile to get back. Way more than the couple hours it took us to head out.

Getting him back to the AES was a responsibility of mine. I felt it at the time. I guess I still do. Whatever it is. Words. Carelessly rendered and scattered around. Random. All I’ve got on that subject is a bout of clumsy words and white noise from my head and mouth.

Moving on though, real talk about being responsible. The shelter isn’t doing too great. We’re still in operations, but the welcome package stocks are getting stupid low. Need food. Need water. Need both badly. There’s only so much hunting that can be done in a day, and everything on the island’s mostly been picked off. Water’s hard enough to come by. I can pay for it, but I can’t buy too much at a time. Folks generously donate, but still it ain’t enough. I’m honestly really worried, not for the state of new arrivals coming in, but for my job. Keeping my job’s top priority. That’s where my money comes from. And I need money. I have needs. Gotta always look out for number one: myself.

Money though isn’t everything. Stuff is just stuff. If it’s worth it, watch over the ones closest to you too.