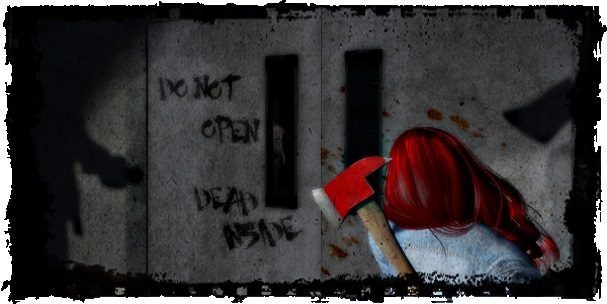 It’s been a time. It’s been a struggle, but we’re mostly done with this year already. I’m pretty happy seeing it go. Things weren’t great and they could of been worse. Maybe next year won’t be so bad. I really rather doubt it though.

We’ve weathered a storm. Fought off a horde. None of that compares to fighting the dead in enclosed spaces though. I hate that. Absolutely hate that. Hate it almost as much as snow. Saw it snowed briefly in Arklay, just a few flakes. That’s enough to set me off. We’ll get to that later though.

Forget who’s bright idea it was to venture into the AES basement. Wasn’t mine for sure. I’d been down there myself, but never ventured too far. There’s only one big hallway to the place and several doors off to the side. Never gotten through them doors. Why would I when one of them said, “DO NOT OPEN. DEAD INSIDE.” That’s warning enough for me.

Found out what was in there though. SURPRISE! It’s the dead, a lot of them. We heard them coming though, so that gave us some time to prepare. Made a little barricade out of a stretcher and some chairs. Finished it just in time too, because the dead came bursting through. Took care of them one by one we did. Just one at a time they’d come through a half of those double doors. We took them down like they wasn’t a problem. There was one though among them that made things interesting. Big guy, called him Fat Albert. Took a few hits to take him down. Think the chair I took to his head did it though. I took that chair to his head a lot. Let’s just say he won’t have need for a hat no more.

As if that big dude wasn’t crazy enough, things got insane the deeper we went. Found the burned out lab, so that checks out. Killed off the old janitor to the place, so now I’ve got his keys. Cool. But then, there was this one last guy in a straight jacket. He couldn’t grab at us or anything. No, instead he’d just charge right at you. Took down the door he was held behind and pinned Vanora down. Goaded that infected to come right at me then! He took the bait and I slammed the door right in his face. Ai was helping with the distraction as Paul and Kendall tried to put an end to things. Guess Thayer and Mark were there too, but don’t know what they was up to. At the right moment, I opened that door. Charged out and put my hatchet in the dude’s head. That, along with all the other sharp objects now taking up a place in the dead guy’s skull, he went down.

From there, it was smooth sailing. Dead were finally dead. None of them were left in the basement. Kind of unsettling to think we’ve been working, sleeping on top of them all for awhile. What’s done is done though and they’s a threat to no one no more. Now comes the hard part of cleaning everything out and getting all the works down there restored.

I’m hoping they get the heat figured out soon. We’ve got these little space heaters, but they aren’t so effective to really warm up the place. With winter coming in, and the snow starting to drift, any time to get things fixed would be good. If they could get the heat fixed yesterday, that’d be great. Maybe I’m asking for a bit much though.

When I saw the snow, that immediately dampened my mood. I was already out scavenging after the hunt, so figured I’d stop by Coach’s to share my bad mood. Didn’t last for long, though. Peaches was there to hand me off a drink. Took a shot and then what was left from the bottle. Kendall was also there with Molle, a girl I checked in at the shelter not too long ago.

They was talking about a scavenge run going on tomorrow. Talking about a list of things to find. Don’t know if I can make it. I might be asleep when they set out. It’s not like I’ve an alarm or anything else to maybe wake up in time for it! Told them though, maybe I’d join them a bit late. I got a map earlier of the lay of the land towards where they’re headed. We’ll see though.

Getting to what we’re looking for out there and around the island, the shelter’s not in a great place on supplies at the moment. Last month was a record breaker: 27 new arrivals. That’s more than double the previous record of 13 in June of this year! So, now it’s onto scraping by and working the hunts and trades. Got a decent donation from Amy, which helps a bit. Pulled in some meat from critters I’ve killed. Nice chunks of it too. Might be enough to last through a month. Maybe not.