Haven’t had time to write lately.. I’ll explain in my next entry when i write about it .. We had a nice little size group join us to the mainland last weekend… the main road was full of walkers  one by one we picked them off as we found our way threw town… it really was such a beautiful town .. to bad all this had to happen ..

The fire station wasn’t’ hard to find.. it was a huge building.. it was a dream.. what it would of been like to work there… Though the drama started no sooner did i walk through the door did this huge walker come out of no where and slam into me… what is it with the big walkers and me? i just attract them like nothing else… But my love jumped on his back as he still tried to get me… with team work i kicked him in the face, and she slammed her knife down into his head.. ending him . though seems he needed the last word.. and farted on Vanora .. i knew the dead still pass gas but omg it was horrible..  She couldn’t take it and vomited all over me .. luckily for me, i’m used to getting thrown up on .. and love her to much to care..

There was tons of supplies everywhere we looked… med kits after medkits it was as if no one had came to this town .. it was loaded that fire station .. maybe no one got past fat Albert… who knows .. but we hit bank… now the hospital can survive till next year

We walked out into the catwalk over the bay area.. wreaked fire trucks everywhere even a wreaked bus… but there in the corner sitting like a dream only a bit banged up .. was one that didn’t seem to bad off .. but it was guarded by its former owner .. still dressed in bunker gear did he guard the beloved truck… I should of did it .. i lead the group.. but so distracted by my prize i let mark one of my paramedics slide down the pole and fight him .. ya know you see so many people gone.. taken by the outbreak.. but it hits home every time you take out one of yours… while he was fighting vanora was attempting to get a good shot .. i was jumping down from the cat walk starting the truck .. which worked. thank god ..  just in time to look back as mark was setting his helmet on his chest..

I worry about mark now .. caught him drinking on the job.. but if what had happen hit me at the sight of one of our fallen brothers so hard . image how its like to him.. he was the one who ended it.. granted he was no longer a breathing thinking person .. but just the action of having to kill someone who was one of your own .. its gut turning .. i’ll have to keep checking in on him.. but he was the hero of this story.. downed the firefighter walker .. and kept going ..

but all in all we came home with tons of supplies, minor wounds… physically at-least .. and a fire truck .. 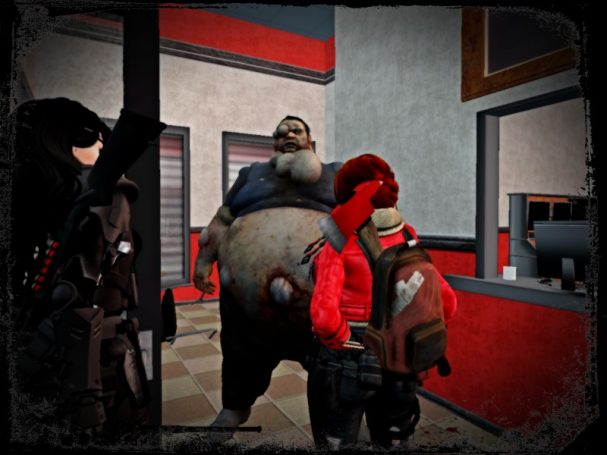