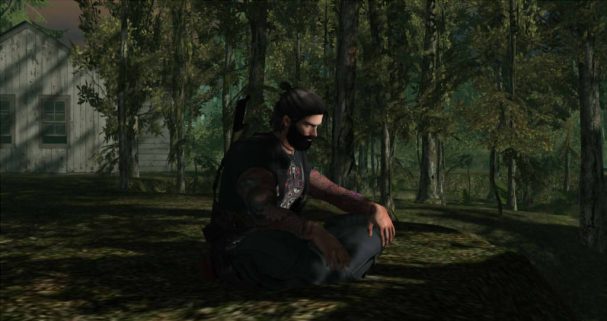 I was a little depressed this morning when I first got up, I’m still crashing at the hospital since I havent found a place safe enough to move into. All the rooms at both the apartment and motel are taken as well as any homes still secure enough to stay in…. I am determined though and will keep looking.

I did my normal rounds, I hit the woods in hope I’d get lucky hunting, but just like every other day so far I struck out. On the way back in though I decided to do a little scavenging and found an old wallet with $47 in cash, so I decided to try out the diner for the first time.

I’m still a little uneasy around strangers, I’m not sure why since everyone I have met so far have been so nice and Geri who I introduced myself to was no different. She could tell right away I was new and offered my a meal for free, with my stomach in full growl mode there was no way I was going to refuse. I ate and we talked for a little bit, but I could see she was pretty busy so I thanked her (again for about the hundredth time) and made my way for one last try at hunting before resting again.

I made my way just past the church and stumbled upon a man sitting on a hill, well more like I didnt see him and he about scared me out of my skin when he said hi. His name was Dom and after telling him my misadventures with hunting took the time to give me a few tips, I guess it’s better to find a good spot and stay there instead of trampling through the woods. Anyway we ended up talking a lot longer than I had intended and next thing I knew it started getting dark. He was nice enough to make sure I made it safely back to the hospital, then headed off into the darkness to his home.

I remember how everyone was before, always in a hurry, rude and uncaring to those around them who needed help. Now though it’s almost like humanity was reset and people are kind and helpful to each other, they actually care again.

I don’t know maybe this isn’t the end of the world, maybe there is hope.