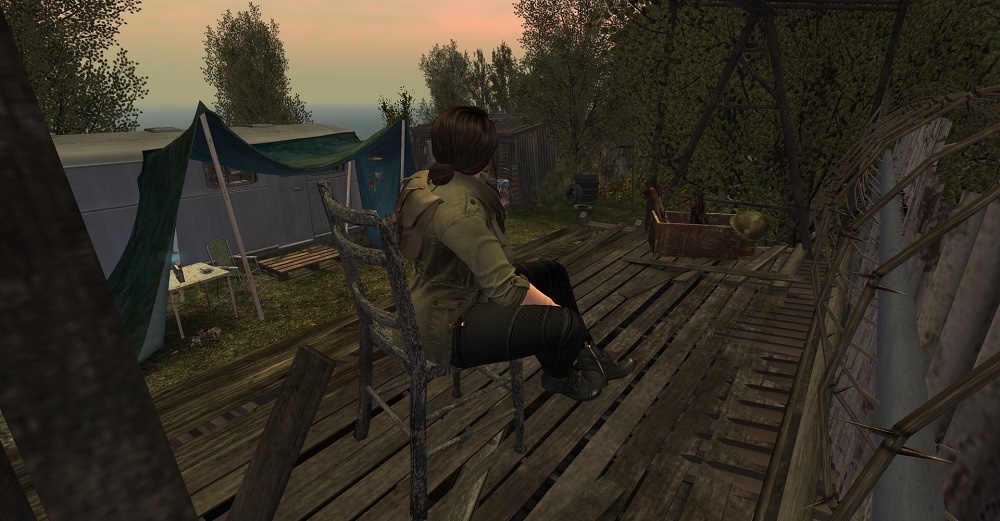 More rain. There’s little to do but sit and wait it out. I’ve been sleeping more than I should. When wake I walk the perimeter regularly. Not sure if it’s paranoia or something else but I can’t rest without doing so at least every few hours. It’s not even so much the dead-heads I’m worried about, though in a trailer with entry and exit at the same end I’m a sitting duck if one manages to get in. The incident at the bar keeps playing on my mind. Society’s knee-jerk reaction to reach for a gun at the slightest provocation. If Kane was here he’d probably tell me to stop projecting, be prepared, be cautious, but stop being paranoid. Paranoid and twitchy. It’s easier said than done. With so much time to sit and think now all I do is worry. I worry, I sleep, I walk the fence line, and I wait. And just like everyone else I keep my gun close. Just in case.

Still training has not eventuated. I haven’t seem Dom or heard from him. Or Claire. Or the guy with the sledgehammer. My face has healed rather well and much of the swelling has gone down. I no longer feel like Quasimodo from the Hunchback of Notre Dame. I’m sure Dale will appreciate the fact I’m likely not scaring customers away. I’ve spent a lot of time at work lately but usually the graveyard shift. Sleeping all day means I’m too wired at night. I get to sit and read books or stare out the window and watch the things shuffle past. Luckily they don’t see me much as I stay quiet, low, and out of sight. The worst part is seeing the children, or what -used- to be children. There was a little boy with a teddy bear in his rotting hand earlier and I watched him growl and stagger past. It was a silly thought but I couldn’t help but think Damon would have been about his age now had he lived. The walk to and from camp in the dark is unnerving but it helps keep me focused and not slip into complacency. There’s new camps springing up either side of me in the woods and that means more people are settling in Arklay. Once upon a time it was the dead we had to fear most. Now it’s the living as well as the dead. Survivors seems more appropriate. I wouldn’t call the day-to-day or even night anymore living. At least in some ways it feels like things are improving.

I had my first “hunt” earlier. I didn’t plan it. The animals appeared as I was walking through the woods first from camp and then to camp; a pig and a turkey. They just stood there beside the road as slowly I took my gun in hand. I tried to remember what Kane and Doc had taught me. I aimed, I exhaled slow, I squeezed the trigger. And wouldn’t you know it, I got them! I was so excited! I probably shouldn’t have used the bullets and run the risk of attracting more walkers but the thought of actual food not out of a can or with a picture of a cat on the label was worth the risk. I cleaned them best I could and stowed them in storage. I’m going to need more salt before the week is out, at least stews are quick, easy and relatively inexpensive.

The rain and the dark made checking the fence almost impossible so I retreated inside and locked myself away behind gate and then trailer doors. I drew the blinds to keep what little heat I could generate in and any light projected dim or masked so it wouldn’t attract living or dead that may have been wandering around outside. The weather is getting colder. I changed into what dry clothes I could find and settled on the mattress at the back of the trailer as the rain thudded down on the roof.

There were pencils in a drawer opposite the bed and paper stuffed in a box on the shelf. Bathed in flickering candlelight I sat for what felt like forever doodling, sketching, distracting myself with something lighter than a crowbar or branch or lead pipe or gun. My college years came back as I soon started to see the faces of my children emerge in scratchy lines staring up from the page. My old arts teacher would have been critical I know it but after various attempts I was able to sit back and feel- proud? No. Lost. Oh so miserable, re-losing and re-mourning all over again. But I could see them even if they were on the page. I couldn’t touch or hear which made it worse somehow but at least I had something. Had I known the end of the world had been nigh I might have pre-packed photos like others seemed to or simply planned ahead and lived safely underground with them all alive somehow. I just hadn’t known. But sat on the floor of the trailer with paper in hand I felt like in some small way I had my kids back again, finally. I drew my sister Lola, and then I drew Kane and Doc. It was a struggle to finish with hand cramped to a calloused claw but the end result made the struggle seem worthwhile. With whatever adhesive I could find I attached the pictures to the walls. They might have only been one dimensional roughly hand-drawn projections from my memories but for the first time in months if not longer laying in that little trailer I no longer felt all alone. I felt like I was home.