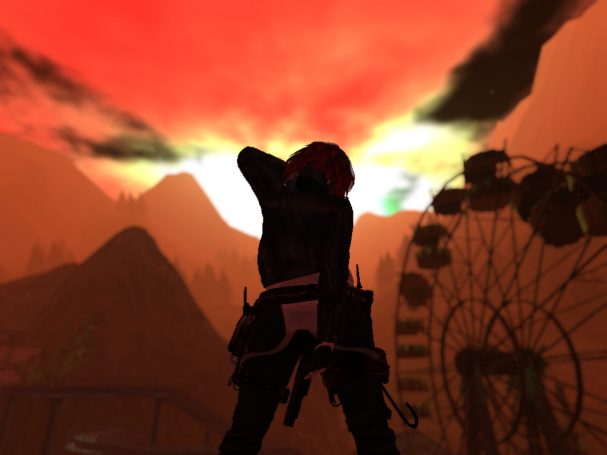 “Stopped to appreciate the view above an abandoned amusement park. I could hear the groaning of the long-dead below. It was a pity, something that had once given pleasure to so many was now a trap for their anguished corpses. I’d give them all mercy, if I could.”

It looks like my days at the shelter are coming to an end. I’ve managed to scavenge a few things to donate to them twice now, so I can leave on a positive relation with them. Things are progressing here, and I find myself settling in to the point where I need something more.. solid, to root myself in. On a tip, I headed to where Task Force Rainbow is said to be holding regular open drills, and managed to get myself an in with them as an Operator.

The drills were solid, even if they were basic. I haven’t been part of a formation drill in long enough to almost make me miss it, and it gave me a chance to practice skills that were getting dull, with the lack of available weapons to use. I was told to patch up and get moved in, and present for drills tomorrow, so I went back to the shelter to get the shit I stashed there. I took the long way, looking for opportunities along the way, mulling over the decision I’d made. I didn’t take it lightly, entering into ‘service’ again. There were some that would embrace it whole-heartedly, and others who’d reject it outright, if offered. I was of mixed mind; putting yourself in the command of someone could be good, or bad, depending on who you were following. I’d learned the hard way what it was like to follow the wrong one, and I wasn’t in a hurry (even now) to repeat the experience. The Commander, ‘Kaz’, seemed level to me so far – but I hadn’t had much exposure to his leadership yet.

For now, I was glad enough to have some purpose. To have goals, again. The purposelessness of my life had been far more of a problem for me than anything else I’d encountered, before and after the Outbreak.

I need to get water, and I need more food. I also need this damned ankle to finish healing, and my eye.