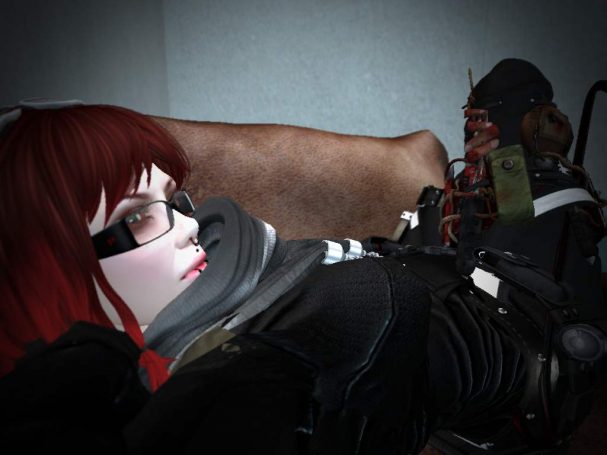 “I can still remember that scream. Those kinds of memories turn into ghosts that never leave you.”

There’s some rumblings around town about that trip out to San Mora, it looks like there’s a lot of interest either for potential loot and trade, or for a rumored cure. I plan to be going, one way or another, but I’ll be sticking around to see if T.F.R. plans to set off. I’ve been alone long enough, I’d rather go with them if they plan to go. I doubt they’ll want to miss out, though.

You don’t go unprepared into an Op., so I headed out to see what I could rustle up. I got lucky a few times – got a fuel can, some cash, some meat and ammo. I needed more of each, so I went up to the S-Mart and traded off the gas can for supplies and got a box of food, a bottle of pills and a new med kit. I didn’t have enough for more ammo, yet, so I headed out in search of water (since the store was out). On my way, it started to pour again so I detoured to the hospital to drop off a few donations and rest up. I figured no one would mind if I took a break up stairs in the shelter. A can of soup later, and here I am writing this journal, full on food – and memories.

I can’t help but think, from time to time when the sheer lack of children hits me, that there’s one really good thing about the apocalypse. In the new frontier of the zompocalyptic ruins of the world, the only law is the law of survival. Individual communities, like Arklay, try to stay civilized.. but the rest of the world has just about gone over to glorious chaos. This is good, because it means I never have to hesitate when it comes to acting.

A few months ago, I ran across a small family, headed for Arklay. The daughter had heard about the island, and convinced her parents to go; it was from this girl and her family that I learned about the island. It was the first time in what felt like forever since I’d seen someone under the age of 10. She was adorable, and haunted. I never questioned that look in her eyes, almost by reflex assuming it was caused by the atrocities of the environment she now lived in, like so many children before her. I should have looked harder.

I went out to scavenge, one night near the end of our time together. We’d made it nearly two days on the road, before things went to hell. When I came back, the camp was half torn apart and the girl’s mother was dead – twice over. She’d slit her wrists, and let herself turn in the camp, it looked like they’d had to put her down. The memory of the scream that came after that still haunts me; I can still remember that scream. Those kinds of memories turn into ghosts that never leave you. I found the two of them, the little girl and her father, a few feet into the brush where she’d fallen trying to get away from him. He was just kneeling there, his pants around his knees, the little girl’s teeth in his neck. She’d died in the fall and it didn’t look like he’d noticed until she…

I used my last bullet on the little girl; that sick fuck got the dull hand axe. Her name was Amora, if you can believe it. Love. Fate has a sick sense of humor.