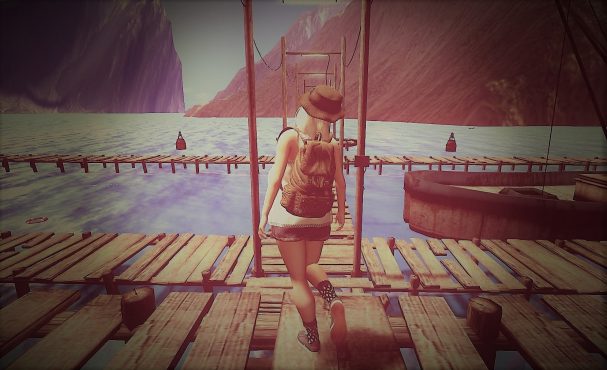 I’ve taken two days off of work now.  Just haven’t bothered to show up.  I’ve combed the beach close to my boat for wash up goodies, but mostly I’ve just stayed in.  Zeke hasn’t left, much to my surprise.  He’s actually been taking the days with me, just sort of enjoying life, pretending that things are… normal.  Or maybe enjoying the normalcy that can be achieved when you forget the rest of the world.

I know it’s not something that can last.  “Normal” There’s always going to be someone, somewhere that will think to take it from ya.  So I know I’ll always have a fight on my hands, but lately I’ve been thinking, wouldn’t that fight be so much easier with two people, rather than just one?  I feel stupid even entertaining the thought, I mean I haven’t known the guy for long.  I shouldn’t even consider getting used to anyone being around.  People come and go, it’s what they do.  Nothing lasts… nothing.

Except maybe this pregnancy.  This is the most time I’ve spent with anyone since my folks died.  I mean day in, day out, stuck to me like glue.  Every little mile stone the book talks about… from the flutters, to the kicking.  Hell I’m pretty sure it had the hiccups.  I’m there experiencing it all with it.  I’m never really alone, but at the same time, until meeting Zeke and actually having someone to talk to, even though we don’t really talk ALL that much… I felt entirely alone.

Like an Island.  That’s how I felt… which is ridiculous considering I run the ATC.  I see people every day, I work with sales and trades and staff… and most days I still couldn’t escape that feeling that if I died tomorrow I’d just be another face that faded into the recesses of nothingness.  I mean people barely even talk about Abel and he had quite a foothold.

So what good is it, being Queen of my little trash heap?

It’s so silly to want for something more, when in this world…. as it is… I have everything that a person should want for.  I have shelter, food, and a means to protect myself.  I should be doing a naked hula out on the beach under the full moon in praise for how fortunate I have been.  Instead, I just sit here with this stupid book writing down ‘the feels’ and about how I want more out of life.

Sometimes I wish I had stuck it out in Sugar Grove, and stood side by side with people that had known me all my life.  I wish I’d of been strong enough to clear out the farm and keep the animals thriving.  I wish I could have saved my mom.  Losing my dad was hard, but losing my mom was like being gutted and left to bleed out.  I like to think she knew just how much I loved her.  How much she meant to my life.  But not being able to actually tell her and knowing that rather than staying to fight for what she worked so hard for in her life… being a coward and running.  I mean it felt right a the time, but now that my heads on straight it seems like maybe it was a mistake.

Maybe I should pack a bag.. a truck.  God knows I got enough fuel to make it a fair distance.  Maybe I should just pack up what I can, leave the ATC to take on a new face, and make my way back to Sugar Grove.  I miss the mountains.  I mean hell maybe Zeke will even come with me.  I doubt it, what with his sister being here and all, but if he isn’t dead, I have a brother of my own somewhere over there.  What if he’s been there this whole time hoping I’ll turn up?  I doubt that seriously but… man I wish I wasn’t so far from home.