Day 885 since the Outbreak.

Celebrated my anniversary with a party. Had quite the turnout! About eighteen folks showed up. Some I knew, some I didn’t. Made my rounds as best I could in it. Introduced myself to unfamiliar faces and caught up with the old. Was so busy that night, I barely got in any drinks for myself! Folks sure did drink the open bar I paid for dry though.

Folks seemed to be really eager to celebrate my time here in Arklay! Got a few gifts and some money. Dale and I guess maybe Marcus had decorated the place all up with lights and a big old banner with my name on it. Even made a cake and cupcakes! Jade handed me an envelope with a wad of cash. Al got me a nice card.

“To Ben. Well done not being zombie food! Lots of hugs, Al,” Al wrote with three X’s at the end!”

Ein got me a bunch of signs to hang, but I think the best gift of all was seeing him in that old timey, old world getup! Apparently, he thought this to be a fancy occasion. Baymo though, she got me an event to remember. 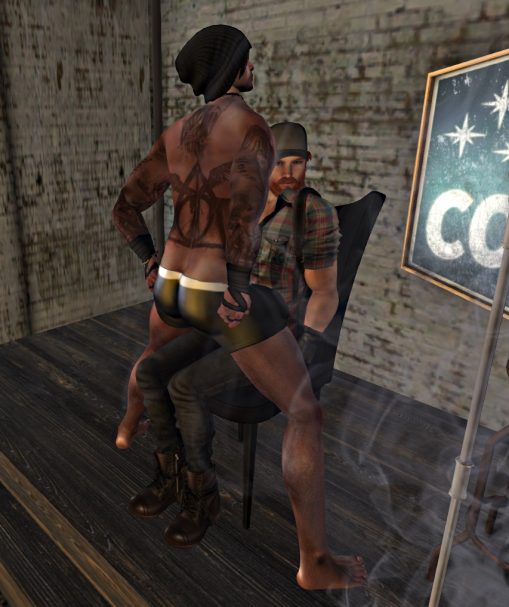 “I’m here to take my clothes off and dance all over you,” said the stripper she got me. It was something like that. Lady got me a male stripper, a dude! So, this guy did exactly what he had advertised. Put me down in a chair, danced about me, and took his clothes off bit by bit. I took his belt off myself! He put my hand there to do it though. Stripped right down to his shorts and put me to peek what at was inside. I tell you what, the outside that was showing was not false advertising. That came widely apparently when the guy took my pocketknife and cut his shorts right off! So, there he was shaking and gyrating all over me with his dinger all flopping about in the case Baymo was making it rain on stage.

“Wait, I thought this was some hairy chick! It’s a dude!” the stripper suddenly said.

He stopped his show, collected his clothes, and stormed out naked right into the street. Well, that happened and it was a riot! Ten out of ten, would sit through again.

Party went on well beyond the two hours I had planned for. Lots of folks left, but a few stayed behind. The ones that did got cake, after I setup the candles to blow them out and cut the pieces as well. After passing out all the food, that’s when folks started toasting me. Baymo started off by saying how much of a great guy I am. Ein told me he appreciates me being around. Joanne raised her shot glass with a short and sweet, “To Ben!”

After most of these toasts were done, remembered I had my own cake to eat! Wasn’t sure of it at first how it would be. It may of been decent by normal cake standards, but as rare as they is these days it was a real treat! Cakes is hard to come by these days with the apocalypse and all. Makes getting one all the more special.

As I was eating, I overheard Geri and Jax talking about setting up shop. They’ve got their minds on doing some sort of clothing store. Think they intend to move into the old delivery place next door to Coach’s. They’ve a lot of running around and moving to do, so I offered them my wheeled pallet to help them along. Both seemed real grateful for the offer. Left that thing in the back yard of our neighbor’s for whenever they’re ready to pick it up.

Was about ten o’clock by the time the party ended. Everyone who was left got second servings of cake. I carried what was left of that and the cupcakes off to the AES. Left it out on the table for anyone to eat. Was all gone the next time I arrived. Suppose folks liked it all, by the mess they made. Hadn’t heard anything about it all otherwise.

Slept well that night. Didn’t wake up feeling too hung over or groggy. Did my usual routine and headed out on my way to work. Walking the road though, I saw a bunch of folks heading into the old church nearby here. Didn’t think it was in use at all. Seems like some folks called themselves “Faith of the After Days” took it up.

Folks filed in for what it seems like was service. I guess you can call it that. Didn’t seem preachy at all. Called themselves a faith, but not one with religion. It didn’t make much sense to me. What I did get though was how willing they is to help folks. Woman up front, speaking all the words, said it was up to us to work together to make something out of this life. Then she handed out food.

Not everyone was really into it though, not the handouts. Jade tossed a can of corn right back at that woman and shattered the vase standing on the mantel behind her! She and then someone else stormed after her.

Said, “If she didn’t want it, I’ll take it!” But I didn’t get it. Think Ein did. He pretty much said the same. Did got some honey for the kibble she gave me earlier. And that was pretty much the end of it all. I filed out with everyone else, but ended up not going to work. I went back home.

Back home, I started going through all the things the previous owner left behind. Some old dude. Guessing he’s likely dead now. It’s kind of weird to think that we’re living in the stuff and houses dead folks leave behind. Lot of what he had was junk and I moved much of it to the garage. Kept out a few of his things though, like his photo album. It’s kind of interesting to page through it to see what life was like in Arklay before the dead started rising up.

Seems like it was pretty what you’d expect. There’s pictures of here of that old man and his buddies drinking at Coach’s. I see them fishing off the pier at the ATC. Sometimes they’re hanging out in the backyard of this house. Must of been a good life this guy had before everything started turning south.

Maybe things are starting to turn around though. There’s been some new commodities making their way to the island. Lots of food and drink, harder booze which wasn’t easy to get a hold of. Even seen some new crops coming in. We may finally be able to self-sustain ourselves now. I’ve a feeling if we make it through our next upcoming winter, we’ll be just fine. Arklay just might not ever end.