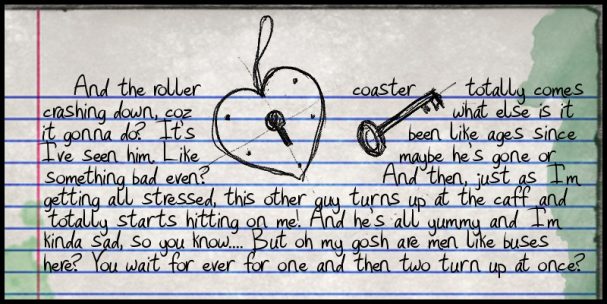 And the roller coaster totally comes crashing down, coz what else is it gonna do? It’s been like ages since I’ve seen him. Like maybe he’s gone or something bad even? And then, just as I’m getting all stressed, this other guy turns up at the caff and totally starts hitting on me! And he’s all yummy and I’m kinda sad, so you know… But oh my gosh are men like buses here? You wait for ever for one and then two turn up at once?

One of the things Senpai used to say was that I gotta to focus, that I totally get way too carried away by stuff and I guess, you know, like so much stuff, he was probly totally right. And I do try, I like really really do. Like now I made an extra special effort. Coz of the guys and everything, you know, to take my mind off stuff. I’d bought a gun, a handgun. It’s one of those HK45s, one of the compact ones, which is like totally perfect. So, just like Senpai made me learn, I spent ages cleaning it and stuff, you know, the way he showed, the way you can, even if you don’t have all the proper kit. And it was kinda good I guess, therapeutic I spose.

Oh, but then also this kinda funny thing happened. There was this woman at the caff, and she’d turned up to feed her dog! The rabbit stew! I mean, I know I’m like getting used to this place, but still… kinda wow, but whatever, that’s not the point. She seems nice, used to work at the caff, kinda super curious, but nice and tipped me too! So we were chatting and stuff when all of a sudden it started raining, and I mean bucketing it down, like a serious washout downpour and she just ran away! Upped and ran! Like the water was gonna make her melt or something, you know, like that witch.

But hey, rain like that, it’s like a free shower right? So I just took my top off and had a shower! Cool huh? I mean, if I hadn’t been at the caff, I’d probly have got all naked and had a proper wash, but hey, some’s better than none, right?