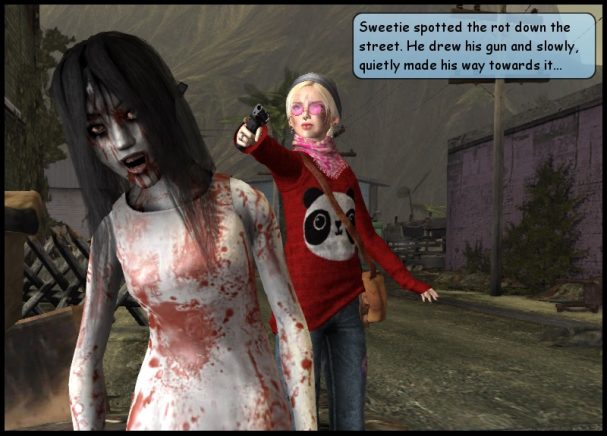 So I’ve kinda slipped back into the old routine pretty easy like nothing much’s changed. Jenna’s there when I get to the caff for my shift which is cool. The pub’s still no smoking, which is like majorly not cool. Nore’s scrapped the paper and opened a hostel and something called Water Works or something, but there’s water there for sale, which is totally cool, and Ashes’ like done a deal with her, so that’s cool too. And there’s like a farm shop that’s opened opposite the caff. I’m guessing that’s cool, but not like actually ever seen anyone in it yet.

But I was walking round town on a bit of a scavenge like, when I saw some fucking gallows! Seriously! Gallows? Like WTF is that about? It’s opposite the Watchers, or whatever, but that’s like seriously not Buffy. Got me totally spooked, like shiver down the back spooked, coz, you got gallows and pretty soon, you got mobs, probly with like torches and stuff, and then it’s straight to lynchings. So like, seriously, not happy about that.

Before, there was talk about Watchers and a Town Council and stuff like that, but I’ve heard nothing more in like ages, but like now I’m starting to get seriously worried, coz if you got gallows and there’s like nothing, you know, like organised around it, then, yeah, like I said, it’s gonna be like mobs and lynchings… Not that organised executions are much better.

I’m thinking I should probly ask around about that. The caff’s been kinda busy lately, which is cool, so someone’s gonna know something, or maybe it’s just gonna be like loads of just rumours and gossipy stuff.

But hey, rumours and gossipy stuff’s cool too, right?