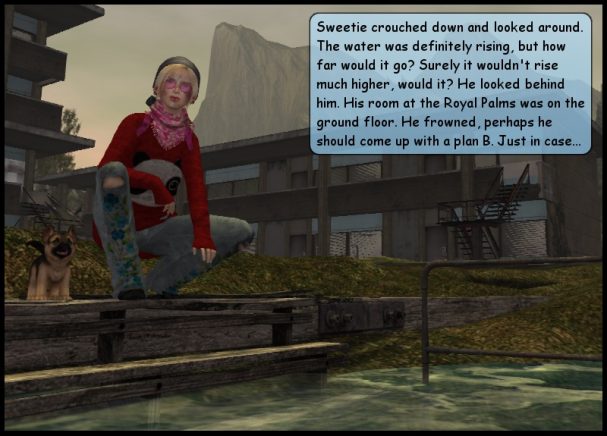 So the sea’s like higher than I’ve seen it since I been here and it’s like higher than the pontoon key thing, which I’m thinking is probly not normal, right? So I walked along the coast earlier and there’s that shack between the bridge and the fishy place and that’s totally flooded. Guy who lives there’s pitched a tent on the roof and kinda rigged some ladders to get there. Really not sure about that one, but dunno who lives there, so you know… Not gonna teach my grandmother to suck eggs and I’m pretty sure just about everyone here knows more about survival stuff than I do.

Sometimes I think I’m about the only one here who’s not either been some kinda super prepper guy or like some army type.

But problem is, if it gets much higher with the next tide or whatever, and it like goes over the top… I’m on the ground floor so I’m probly gonna end up getting flooded. And that’s some shit I can deff do without.

So I had a good hunt as I walked the coast and I found some old bags, you know like solid tough things, so I filled then with sand (I soo need a wheelbarrow!), sowed the tops up and now I got myself some sand bags. Sort of. Not sure what good they’ll do. But I’m also thinking I might have to stash stuff on the shelves and things. Not got loads, but still kinda wanna look after it.