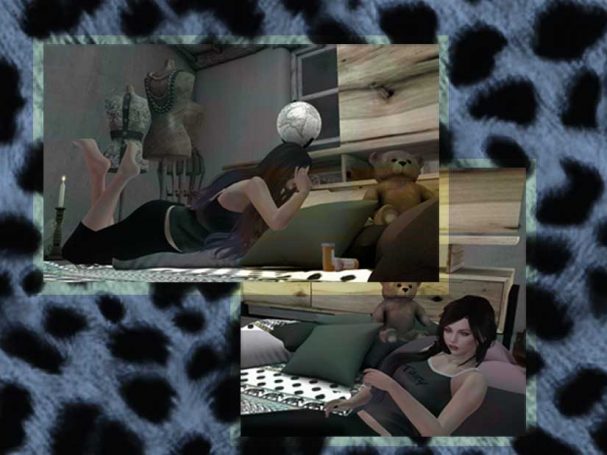 Starlin spent the last several hours sipping water in the attic of some abandoned farmhouse and rubbing her face on various pieces of clothing she’d found there while dictating a journal entry to the mannequins who were doing a very poor job of recording her words. She wasn’t too upset with them about it, considering the fact that they had no arms with which to write nor even a pen. As her eyes fluttered into the back of her skull once more, she tugged on the cropped top that was on the verge of being ripped off in annoyance at how hot she was.
“Captian’s log, Stardate erhm… Twenty… Twelve.. Twentytwelve. On our third day of exploration of the Island System known as Arkay No. XIII, we have discovered along with a varied sampling of natural resources one that is very precious. A resource valued across the galaxies known in many languages simply as X. I have managed through interstellar trading protocols to obtain a sample which has been taken back to the ship and is currently under observation by myself and the ships medical bay directer, Lt Stuffy Bear.”
Minutes or hours passed before Starlin jolted back into her reverie, a long pull of her fourth water bottle muffling her first words as it spilled down her chin and onto her neck. “Our first impressions of the sample was that it may be a weaker strain of the element but on further observation the properties of Arkay No XIII’s X have proven potent indeed. In fact, it may be the most potent X in the entire system. I have decided that we must verify with the rest of the crew so over the coming hours, Arkay No. XIII’s X will be dispensed in controlled doses to Lt. Stuffy Bear as well as the HoloBabes and Danny from the Replicator room because he’s quite hot. In the mean time, it has been brought to our attention that this Captain has failed to record our initial observations about the actual Island Arkay No. XIII, I will attempt to do so hencewith, fourthwith… The island seems to be inhabited mostly by males and females of a distinctly humanoid origin. These being however must be anomalous to their geno-type for they have reacted to the galaxies wide spread infection in a truly remarkable way. Some seemingly unable to stop smiling for long, others appearing to have no scope for the severity of their situation and wholly undeterred from living a life close to what they had before the outbreak. Every last one of them however, reaching out to their fellow ‘human’ in camaraderie and tribal unity that has allowed these peoples to flourish where most others floundered. It seemed that they had an almost instinctive understanding of community that took the crew by surprise.”

Starlin had been rambling in a half coherent mumble for quite a while when she started up again apparently having forgotten to keep up the Trekkie sthick. “The first day was kinda crazy. Here Ty and I were, strangers fresh off the Ferry, cold, hungry and tired. I wasn’t expecting much when I went looking for someone to trade for some food but damn was I in for a shock when people just handed me a whole bowl of stew. Almost the very next person I met is topping me off with tea… tea! Can you even imagine having something like tea in a time like this? Well, they do and they shared it with me and acted like it was really no big deal. I also lost a fight to a turkey, but lets not talk about that one Lt Stuffy, eh? By day two I had an understanding with the people who keep the islands water systems going and a temporary place to crash for the both of us. It was still kinda crazy though because a couple of infected somehow got past all their walls. I was all set to defend these good people when another newly met resident threw a bowl of stew at the one closing in on me then dragged me out of the fight. I was honestly pretty pissed but he had the right of it, I wasn’t thinking straight especially when that bastard infected tackled my new boss or one of them. It all turned out fine in the end and now here I am, rollin bawls and talking to a bear because this place even has the good stuff like real doctors and drugs. It almost feels like civilization again.” She smiled at the bear before rolling it tight to her chest to snuggle before dozing off with a light snore.