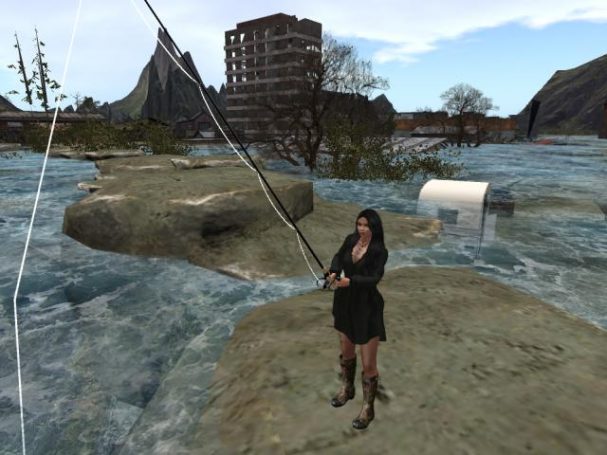 It’s been awhile since I have wrote in my diary. I took a journey without telling my sisters Jenna and Groovy that I was leaving, knowing that they would try to stop me. However; I knew what I needed to go for myself, I felt like I was trapped on Arklay Island and that I was waiting for the infected to take over so I sneaked back to mainland on a boat that was headed in-land. After arriving to the mainland on the coast of California I searched around a bit until I realize the whole reason why my sisters and I went to Arklay Island, the mainland was over-ran and zombies taken over. The zombies are now slower and weaker than I remember, due to lack of the living to feed on so I was able to defend myself pretty easily but still even though they are slow the zombies are still dangerous because lots of them are in a large groups and can corner you and could possibly be trapped on all sides so I still have to be-careful. I kept close to where I could keep eye on the boat that I traveled in-land on so I don’t miss my ride back to island which could be days or even a week determining what they are on the main-land to do. I scavenged up a few items that was in the shops along the coast with some survival items that packed in my back-pack before leaving the island, I will be alright for a while. I took post in top of one of the shops after making sure its secure and zombie proof with something blocking the door. I sat in the window on the second floor giving me a clear view of the boat. A few days has passed and was starting to get dark, I had already ate my dinner that was a can of pork-n-beans and was reading into one of the books that I found in the shop below.  While reading my book I heard someone yelling “its all clear lets get this loaded on the boat before the zombies catchup,” so I quickly packed up the few items that taken out and put back in my backpack along with the book I found and headed back down to the boat waiting for my chance to sneak back on without being caught, I hid behind some the boxes that the men carried on-board same way I came to island the first time, but this time I’m certain that I am headed the right way back home with my sisters where I should have stayed. Returning back to the island with a hard hit to the side of the boat waking me up and the men yelling tie the boat down. The island is not same as I had left it once I sneaked off the boat I had to step into the water looking around some-things looked familiar then again different and realizing what was happening the water has risen  that why the men didn’t use the docks on the island. I hurried inland to go check on my sisters knowing that they was worried to death about me, However; I was worried about them knowing that they been staying in the old hotel along the coast of the island. I rushed to go see if they was safe and out of danger from the flood and gratefully they were safe. I stood there listening to my sister Jenna scold me about leaving without saying anything and told her my reason for not telling and why I left knowing if I did tell them I would have never rid of that feeling of being trapped. Now I’m trying to make the best of the flood while trying to keep safe the flood is now up to my front porch on my trailer, hopefully won’t rise no higher but have my bags packed and prepared just in-case I have to move further in-land. Other than the flood its been nice clear day with crisp cool air, I decided to do something fun, something that I havn’t done in ages. I dug out a old rod out of the closet that was left in my trailer before I before I moved in waiting to be put in good use. I grabbed my rod thinking they has to be fish swimming around with all this flooded water from the ocean so I found a good spot to cast my rod out and wait for bite while I fill-in what been happening in my life lately to my diary. I hope I get some bites soon forgot how much time it can take before you catch something. Fingers crossed hope its a big fish…let me re-word that not too big that I can’t reel it in though.