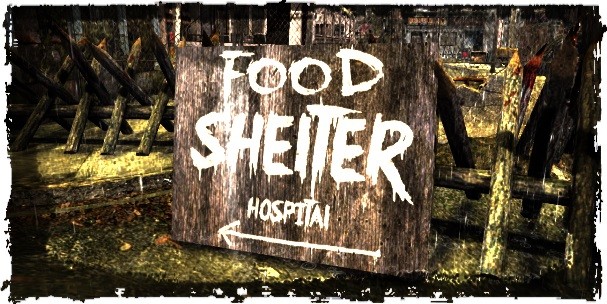 Got no idea what day it is. Don’t got much to my name either and now, even less than when I found this place. Arklay. It’s a full, thriving little town with more living folks than dead ones.

That’s different, a town. Hadn’t come across that yet. Ain’t like them little camps and buildings I holed up in with other folks. We didn’t do much trading before, other than bartering with our rations. This place got some businesses though and cash has got some worth to it again.

– $25 for a drink of moonshine I’m sure was nail polish remover.

+ Picked up some corn and water from the shelter.

= $24 left in cash, my wrench, just one outfit of clothes to really talk about.

Saw cigarettes were a buck each, and that was just too rich for my blood today. I got needs, and the most immediate one was for a drink. Local bar, Coach’s, is the place to go-if the only place to go. Folks seem real friendly there and eager to chat. Almost like they been alone for too long. Know I sure have. Ain’t usually so talkative myself, but I’ve spoken more today than I have in recent times.

From all this talk, learned there’s the Keepers that are the law in town. Seems like folks pretty much take them or leave them-mostly leave them. Kinda got the impression they might be a little heavy handed. Strange, considering there ain’t too many laws here.

All there is a short list of rules posted on a wall. They’re pretty much just common sense. I can work with that, I think. Don’t really want folks touching my things, and I’m not about to touch their’s unless I need to. Seen enough folks get murdered for no good reason at all, so I’m alright without having a bloodbath in the streets. That’s really what all the law boils down to here.

Everything’s surprisingly all nice and orderly here. They even got a system for new people like me that drop in. You see the sign, you head to the hopsital-they give you shelter and food. Gotta go through a medical examination that ain’t too bad-apart from the needle. It’s a sweet deal, but it ain’t permanent. Gonna ride out this gravy train for as long as I can, until they kick me out. Seems like that’d be soon though, if I don’t start hauling ass. Get busy moving or get busy dying.