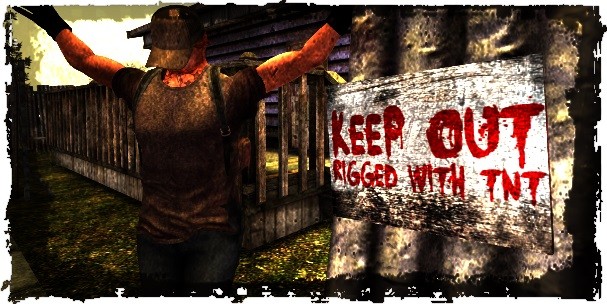 Took to scavenging for a bit, but found a whole not of nothing. Eight hours poking around and there just wasn’t much worth to anything yesterday. Just having about had it with picking through the trash, I took a turn to hunting.

Again, the hunt was pretty poor. Nothing. Absolutely nothing. That is, nothing to eat but ran into Vince again. Only knowing the hunting spots he’s showed me, I’m bound to keep running into him over and over. Maybe some day I’ll get used to him surprising me out of nowhere.

On that note, much as we see each other, there ain’t too much of anything new to share. Was the usual ho-hum chit-chat.

“How you doing?” I’ve been alright, I suppose. Been rationing the food and water I found. Ain’t a day yet when I feel full or got a wet mouth. Days are getting a little easier as they go along though. Things just getting better little bit over time.

“You find work yet?” It was at that point Vince bended my arm a little to find work in the shelter. Was a bit hesitant to go along with it, but there ain’t too many options for me. That’ll be the plan for now.

You found a place to stay?” That last question, I could actually say yes to. Was poking around the suburbs the other day and found a place that weren’t too half-bad. Was empty, far as I could tell, save for the basic fixtures and a couch in there. Could only really look through them windows, as the only door leading in was locked. Roof might need a bit of work. Comes with a fence, but not a real good one-big wide gap right where you walk in.

Invited Vince to go down there and take a look with me. He took it up and that’s just what we did. After we were sure there weren’t no dead around, Vince made an estimate of the building. Came to the same conclusions I did.

Tried to figure how to actually get inside, though there was really no good way about it. Only thing we could do without breaking a window was to bust a lock. Vince needed my wrench to get it done. With no other options, I let him do it. He made that door knob just snap right off. Now, I could get inside, but the door ain’t gonna stay shut for too long.

That was about as much time Vince could stick around for. Gave him my goodbyes and he took off. Went fiddling around in the place after that. No power. No water. Interior’s pretty worn and battered. I can work with it though. Looked for sure no one else was living there, so just done claimed it as my own. Home sweet home.

There’s a few things I need for this place. I’m looking for a bed, at least a mattress. There’s this couch here I don’t want that I’m hoping to trade for somewhere better to sleep. Without the bathroom working, I need a bucket or something else. Ain’t about to do my business in the backyard and get caught with my pants down by some crazy raider or them dead ones. Thought about how to cook food here for a bit. Took a liking to maybe a grill, but figured that’d probably attract some unwanted attention. What I really want is a battery powered hotplate. Need a new lock. Lastly, need some materials to bolster up defense. This place is way out of town and I’m gonna be on my own when it comes to defending this place. Until I get the necessities, I’ll be sharing a dorm at the shelter.

None of that’s gonna come for free. I need to salvage what I can or buy them things with cold hard cash. Went to go on my first lead for work, the shelter. Up there on the second floor of the hospital, Kay and Sea were up there. Looked like there was a little bit of a cooking lesson going on. Brought up working there, but them folks seemed a bit hesitant. Just as I mentioned Vince suggested I do the job, he happened to appear. Caught me a bit off guard again.

Word quickly turned to making up some sort of staff party for the hospital and shelter workers. Seems like a nice idea. Would help morale a bit. Said they needed a few things to make it happen, so I offered to look around. After that, took my leave. No job to be found there yet.

Without real work, the only thing to do is find some odd jobs. Heard there was some sort of… Salon? Whore house? Spa? Doll House it’s called, that’s a place taking folks in to do some labor. Whatever business it’s doing, I’ve no issue with doing the dirty work and getting paid.

And oh boy, what dirty work it was! Missy, who I reckon’s mistress of the joint, had me sweep and mop the floors, do the laundry. Cleaning the sex room was something else, a real experience. More semen on the floor and walls than you’d find at sea! But, it ain’t a threat to no one now-not with all the bleach Missy been pouring. Left my lungs burning and eyes watering.

Guess she ain’t had a lot of folks interested in helping out. At least, that’s what I figured by the way she talked. We both came to an agreement that folks just ain’t up to doing work that requires a bit of elbow grease. Most gone too soft, but they’ll harden up with the more difficult years to come.

From the experience, I can say that day was no easy task. Missy made it worth my while though. Got paid $300. After getting the cash, said my goodbyes to her and some other woman that came in. Did just a little bit of scavenging to find a candy bar. After that, I wasn’t up to doing anything more. Ate that can of fruit gave me and then just crashed in the dorms.

Morning time now. Woke up, washed up, changed into my other set of clothes now that they dried out from rain the other day. Ain’t nothing to eat yet, but don’t got much to go on. Gotta carefully ration out what I got.

There’s a woman here. Asked if I was the new guy. I’m a new guy, but maybe that new guy I told her. It’s just then, Sea came into the room.

He introduced us. Her name’s Blake and she’s a shelter worker. Didn’t stick around for too long before heading off. In part of that introduction, Sea brought up I’m a shelter worker. That was news to me. Didn’t think they were taking me on yet.

Sea sat down with me and we went over the basics. Much of it I already knew on account of being here for about a week. Got a couple baskets to hand out, some pamphlets of information. I can make this work. During all this, I slipped that candy bar I found to Sea-you know, for the party coming up.

Things took a bit more of a serious turn, when the topic turned to others abusing our kindness. There’s a certain kind of punishment for those that do. It ain’t karma or god, like Sea asked of me. Usually, it’s a brick to the face. But, reckon things are maybe different here with the Keepers around. Still, their arm of the law ain’t so long I heard. Bricks are still an option.

Asked me if I’ve ever had to use a brick on someone. My reply: No, I have a wrench! He found that hilarious at the moment. Brought up he used a fireaxe Told him he’s gonna really open some doors with that. We had a good laugh, but then it was time to go on our separate ways. Sea slipped me a bottle water before he left.

Didn’t stick around the shelter for too long after. Poked about a bit and found a can of catfood. What am I supposed to do with this? Think Vince mentioned he’s got a cat. I’ll give to him.

Wasn’t an easy pull. A dead one came right at me just as I was about to leave. It didn’t get me at all, but I got scraped up a bit when trying to get out of the way. Slow dumb thing, it didn’t stand a chance against my wrench. Looted a few bills and some changed-7 bucks.

Went home after that to the trailer out near the fringe. Ate a bit of dried meat on the way. Still much the same as when I left it. Don’t look like anyone poked around in here. Gonna do cleaning here and then set out again.

+ 1 cat food (Hopefully made with real salmon. Or dolphin. I don’t care. Not eating this unless I have to.)