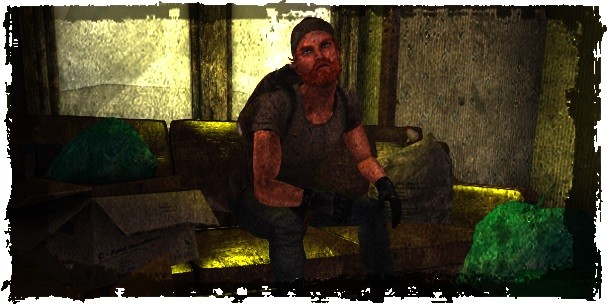 Been a full day since I last made an update. Much has happened. Not much in the way of anything exciting, but there been some progress made.

After doing what I could to straighten out the trailer, left that place for the general store. Along the way, found a dead one and smashed its skull in. Dug around in its pockets and found a $50 bill in its wallet. That money was mine now.

Met a woman behind the counter, who I later got to know as Adrianne. Not the most talkative sort. To some, she might not come off as friendly though she actually is. She got a funny way of talking to folks. It’s like, she’s keeping them at arm’s reach, but she’s more than willing to help out when she can.

Pitched trading a couch for a mattress to her. She wasn’t having it though-General Store don’t sell furniture. Still, she vouched to help me go salvage around for one. Made some decent trade though for other things I need. Got a bucket, got a padlock, hammer and screws for the $50 I just found.

Went back home after that. Searched about the block for anything I could use as a latch. Found two good pieces to use for the inside and outside. Fixed them to the door as best I could. Didn’t have a screwdriver, so used a nickel to screw everything in place. Dropped that bucket in the bathroom. Without running water, that’s a toilet now. Put the lock on the outside and then went to salvage.

Found quite a bit of food out there: canned fruit, corn, and artichokes. Did some hunting and grabbed up a little rabbit. Wasn’t a bad day at all to pick through the rubble.

Come nightfall, headed home. Don’t wanna be out in the dark, not even in this place. If the dead don’t get you, likely some wild dogs or raiders would. Haven’t seen any troublesome folks yet, but I done heard enough talk to believe they out there. Maybe I’m just lucky so far I hadn’t run into any.

Slept on the couch. No one bothered me that night.

Come morning, woke up pretty thirsty. Downed a bottle of water. Went walking through the neighborhood looking for anything good. Found an unopened soda just hanging around. Picked up a couple pallets to put under the mattress whenever I found one. Packed the soda in my bag and dropped those bits of wood at home. After that, went to do my first day of work at the shelter.

Up in the lounge, met a woman named Sin. She was pretty clean, dressed a little more complicated than some other folks. Thought maybe she worked in the hospital and turns out she did. She’s a counselor, probably the one that does those group therapy meetings. Was in a chair off in a corner, making a list of things to look for.

There’s some sort of shot she’s hoping folks will find. Get it once a month, and your mental problems are in check. Easier to do than having to take a pill every day. Ain’t too many clocks around now, and with time being measured mostly by sunrise and sundown it can be hard to keep up routine. That’s what I figured at least, and told her. She was inclined to agree.

Sea and Vince then came up with a load of boxes and meat in hand. Sea had Vince make out some boxes for the packages we hand out. I offered to lend a hand. Didn’t put together them packages though. Instead, was sent to put that meat in the morgue freezer.

It’s quite a bit of meat to put away. If it ain’t used right away, it’ll just rot and go wasted. Recommended we look into drying it out. Sea put me to the task to figure out how it was done. Didn’t have to get far to find a solution.

While we was up there, some woman named Erica was lurking nearby. Kept quite mostly. She ain’t a newcomer, but she been away for awhile. She was up there in the kitchen when I went to put that meat away downstairs. When I came out of the door, Erica was just there waiting.

Thought she might of wanted something, but ain’t sure what. Thought she was after to do some sort of underhanded thing or maybe demand a share of meat. Instead, she just introduced herself. Didn’t get to learn what she really wanted until we met up outside.

Erica wants to remain useful, she told me. Only thing she suggested about that was offering to dry the meat herself. Seemed really pushy on the deal. I was all, whatever, about it though. She can talk to Sea and offer her help if she likes. That pretty much ended the conversation and we both went our separate ways.

Was raining, as is mostly usual, when I headed off to take advantage of free bath Saturdays at the Dollhouse. Was a bit surprised to find not really anyone there that day. Was just that old hooker and the bodyguard at the door. Out in the pool though, was a guy named Jake.

Jake’s somehow involved in managing the place along with Missy. Real pretty boy he is. Think he flaunts it, wearing that tiny little scrap of shorts in the pool. Nice guy though-friendly, accommodating. Seems to know a lot of folks, especially those in the hospital and shelter.

Told me where things were about the place. Showed me where to strip down into something else for the pool. Thought it kind of strange that the normal thing for this place isn’t to go bare in the pool. Whatever though, I wasn’t there to make waves. Got down to my underwear, picked up a bar of soap and towel, then dived right in.

Was getting along pretty alright, then someone else enter. Said her name was Veronica and she’s a new nurse at the hospital. Seems to be too pretty to live in the apocalypse. Don’t know what to really say about her other than she’s a real keeper… As in keep her in a cage.

We all got to talking about family. Veronica’s got some folks of her own here. She’s real lucky to have such. Jake and me both left family behind somewhere. Don’t think we’re too optimistic on seeing them again. Might of took things to a dark place for a moment.

Got out of the pool and had to hold onto my shorts to keep them from slipping. Went back behind the divider to dry off. Slopped those wet briefs over the thing, and pretty sure I might of gotten that old hooker wet. Didn’t get dressed right away, but instead took up a towel and hung out poolside. Sat down, felt real thirsty, and doubled back for a water bottle. Nearly ran into Jake on the way, as he was out to get into some real clothes himself.

Drained that bottle and sat around for a bit. No one else was really talking. Figured I stayed there long enough and then went to change into some proper attire. Put on my second outfit without thinking. Ended up having not just one, but my only two sets of clothes wet from the rain.

While getting changed, talk started up again. Jake mentioned there were some more odd jobs to do, and I was more than willing to take them up. Shared Missy’s love of bleach and he was real fast to agree on that. Gave my goodbyes and then headed out the door.

Didn’t get too far before running into Adrianne. Was really hoping she’d still be up to helping me find a bed. Luckily, she was, and we were off to do just that. Along the way though, she got a bit confrontational. Warned me to not try any funny business. Said she’s more capable of roughing me up than she looked. I believe her on that. Told her I was just looking for a place and not anything else. She seemed fine with that and we moved on out to the suburbs.

Took me to a house just down the street from where I call home. Was real easy getting in, as the door was already unlocked. Weren’t no one in there, no one alive or dead. We was real careful to keep a look out though.

Place itself was kind of still put together well. Kinda looks like maybe it been picked through though. Was pretty empty, save for a kid’s room that looked untouched. Adrianne kinda took a pause on it, and I could see by her face she was upset about something. Told her not to think about it. She played off like she didn’t know what I was talking about and I just let the whole thing rest.

In one of the back rooms, we found a mattress. Didn’t have no trouble at all hauling the thing out of there. Outside, I closed the door, and then lead us down the road back to where I live.

Adrianne was nice enough to help me carry the thing in. Nice enough too to compliment the place for what it is. It ain’t much now, and maybe it won’t be, but it’ll at least be the place where I keep my stuff.

She offered again to help out with anything I need. Returned the favor, myself. It was at that point though, that I realized we hadn’t introduced each other yet. That was quickly solved though. Shared some words on the nature of folks, and then Adrianne didn’t stick around for too much longer. Said our goodbyes and then she took off.

For the first night in awhile, I was able to rest comfortably alone. Was a real nice feeling. Strange feeling, though. It maybe goes against everything to just stick it out in the middle of nowhere by myself. There’s a lot of danger that could come my way. Might not be smart, but it’s kinda worth it. Like not having to share a space though and to just be on my own.

Home’s coming along. It’s all coming together.

Morning time now, and I crawled out of bed wearing the same clothes I wore yesterday. Think that’s just gonna be how it is today. Ate a bit of dry meat and now ready to go on my way.