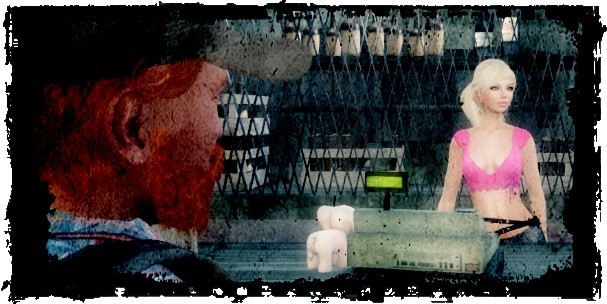 Scavenging hasn’t turned up mostly a lick of anything the last day and a half. Found more handgun ammo and a winter coat. Getting real low on my rations here. If not for the water the shelter handed out to me, I’d already be dead of thirst. As for food, I’ve put off starving by a can of corn and another one of fruit. Had fruit for my one meal yesterday, and corn today.

Yesterday morning, found Maze in the hospital lobby. Gave her a bit of the run down on the scavenge run some of us had just been into. She seemed concerned about what happened, but relieved we came out alright. Didn’t chat her up too long, before I headed upstairs.

When I got up there, Sea and Vince sitting in the shelter kitchen. They was playing some sort of card game. Forget the name of it. It’s like one of them card games, where you read off a question and everyone gives an answer. There’s a whole slew of mixed topics. We got some of the real racy ones. For future reference: neither Sea nor Vince have used toys in bed. Sea can’t recall if he’s drunkenly hooked up with anyone he wouldn’t normally do. Vince sure as hell has, however.

After cleaning the kitchen, I checked the payroll. Apparently I still had some cash owed to me from last week! Must of been at least a day’s worth of it. Picked up $84.

The rest of that day was spent trying to pull some salvage. Didn’t work out. Went home by the time it got dark and then to bed.

In the next morning, set out to the shelter to do some work. No one came by. Did a little cleaning of the kitchen though. Need to keep in mind to scrub the bathrooms at some point. From my recent visits, I know they need it.

Headed to the lobby and saw a girl I never saw before. Didn’t catch her name. She was just hanging out there. Not too sure what her business was. She left pretty much as soon as I got there.

Outside, ran into Maze. She was just coming in, I think. Talked a bit about scavening, and how I wasn’t doing good at it. She brought up the risk of tetanus and some other diseases I could pick up. I’m pretty wary about all that myself. Got these cloves to help protect me though. However, they aren’t all that great. As often as I dig around in the trash, I really need to start bathing more often.

Some guy came around at the end of our talk. Not seen him around. Seemed to know the place though. Asked if there were any big groups of folks coming in. Maze and I didn’t have any clue of any. Without saying much more, that guy just went inside. Said my goodbyes to Maze and headed out soon after.

Tried scavenging around. Nothing turned up after a bit. Headed to Coach’s instead.

Peaches was behind the bar today. Got to talking with her a bit. Shared some of the story from the salvage run. She seemed pretty amazed none of us got hurt. Said I was pretty courageous at the time.

Replied to her I wasn’t really. Was shaking the whole time! Shared I nearly spilled my guts on the floor too. Think fear’s what keep people alive. Makes them more careful about what they do. Stops them from doing stupid things that will get them killed. Certainly saved me that day.

Got to talking about how we’re both doing after that. Said I was pretty okay, but still felt like I’m still in survival mode. There’s a ladder to how well you’re living. If you’re at the top, you’re pretty comfortable. I’m at the bottom, and it’s still a struggle just to get by. At least I got a home of my own though. By the sound of what Peaches shared with me about her place, we might be close enough neighbors.

Bought 10 cigarettes for a buck each. They’re all loosely rolled. Didn’t have a box to put them in, so stuffed them very carefully down the pocket of my shorts leg. Gave my goodbyes to Peaches and headed home. Walked real slow along the way, as I didn’t want to crush, bend, or break the smokes I just bought. Would be real nice to light up again. I miss that burn. Now, I just need something to spark them up with.

While I was home, ate a bit and drank some water. Did nothing there except for lay on the couch and think. Thought about a lot of things like where I’ve come from, where I’ve been, where I’m going. It’s been a load road that brought me here.

From the middle of nowhere, Nebraska to the open road. East coast, west coast, and everything in between. That’s when I was hauling things around, driving a big old truck for a living. Those days are long gone now. Drove west far as I could, and now that rig’s just somewhere south of Bakersfield.

Plowed my way on through the highways, the roads in that thing. During the days when folks was still mostly alive, there was some polite moving around traffic. Now though, there ain’t a second thought pushing them abandoned vehicles and dead ones out the way. Was a good time getting around while it lasted.

Was on my own for a good long time after that. At least for the first three months of it all. Saw my first group of people before then. Started to head up to them, but they had their minds set on some trouble. Big dudes in masks, they was. They had found some folks seeking refuge in one of them electronics stores. Pulled them out from hiding. Shot them dead in the street. Poked around inside, took nothing, and then moved on. Sight of that really put me off folks for awhile.

Was alone, just digging in a dumpster one day, when a couple of kids found me. Couldn’t be older than teenagers. They had gotten split up from their group on a run. Asked if maybe I knew the way back to their place. Was a bit hesitant at first to help them. Figured maybe this was some sort of trick. Goodness of my heart though, I helped them out. Showed them the way home with no trouble.

They urged me to come join them and everyone else in their place. Flat out told them no at first, but they made a good argument. Convinced me otherwise though. Followed them in.

Wasn’t easy for folks to accept me at first. They was a bit suspicious about me. Apparently, they had taken in some folks earlier that turned out to be no good. One day, they just had vanished and took much of what them folks had. It’s things like that, that make good folks go bad.

Things didn’t last though. Was working out fine, until them raiders came. We kept a low profile out there, but think maybe they followed us on the way back from one of our salvage runs. We was outgunned and outnumbered. Everything just fell apart so fast. I was lucky enough to not only make it out alive, but unharmed.

There was a few other times I met with more folks. All of those attempts to make the best of the situation failed. Sometimes, it was raiders again. Other times, folks just didn’t get along. There were too many big personalities for such a small group and things just got downright hostile. Occasionally though, we didn’t have enough food and water for everyone and we just went our own separate ways. Rarely, I just left a group of people because something about them just didn’t sit right with me.

Was well after a year when I found Arklay. Was just wandering around out there, looking for food. Started finding places that were completely dry looted. Little to no dead ones around. Looked like a sign there was some folks near-folks in great numbers. Followed along the cookie crumb trail of empty places until finding a tunnel.

Wasn’t easy getting through. Whole thing was just real dark, and there was no light. Kept fumbling over things on the ground. Sure most of what I stepped on was dead folks. Came out the other side and there was light. Not just light, but people as well.

A whole working, functional town was new to me. Well, new as within the last year. It’s not all quite the same like it was in the world we once knew though. There’s just broken buildings, broken people, broken things. Some folks are living in the cracks of what once was, others are trying to pick up the pieces and put them back together. Despite all the ways they’re trying to make everything fit again, I’ve a feeling it just won’t be the same.