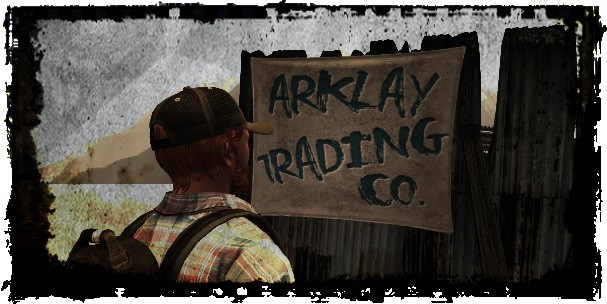 I’m a couple days behind updating this thing. A few things have happened, but they ain’t much to talk about. Lots of scavenging, finally. Saw the usual faces and met some new folks. Been getting pretty well established here.

Yesterday morning, my luck changed finding things. Just couldn’t stop picking things off the road! “Piece of candy!” “Oh, piece of candy!” Was just like that, literally. Picked up a candy bar and some cans of food: macaroni and corn. Also cat food, but ain’t really counting that as something I’d eat. Found a steamy romance novel too! Looking at the cover, I can tell it’s not gonna be exactly to my taste. Still, I’ll hold onto it.

Later in the evening, at the shelter, met a woman who had been there for some time. Didn’t get her name. She didn’t look as well kept as some of the other folks who been around Arklay for awhile. Real nice she was, though.

Got to talking about hunting. Mentioned how it was difficult finding food the last few days. She brought up she worked at Sam N’ Ella’s diner and wanted to treat me. Found it kind of odd. Was real suspicious of it. There weren’t any tricks to it though. Got me a nice warm meal out of taking a chance to trust a new face. It’s stupid dangerous to go around doing that, but sometimes it can be real rewarding.

Went salvaging through town after that. Didn’t find much. Saw a couple water bottles laying around and picked them up. Went home. Ate a can of corn and drank a bottle of water.

Didn’t have no means to heat up the corn. Having just been sick of cold food, I just gave up and went hunting for a solution. Peeked into the Hardware Store, but no one was in. Just walked around looking for another place and came upon the Arklay Trading Company.

Outside was a woman unfamiliar to me. Was just lounging about on a cot when I found her. Kinda small. Dark features. From a distance, she looked like she might be trouble. Up close, she was accommodating so far as business goes.

There’s a few things I need: a battery powered hotplate, tools, nails, and wood to help build a fence. Gonna expand that sheet metal fortification already halfway around the trailer. The ATC had what I was looking for. Didn’t cost nearly as much as I’d expect. Didn’t go broke from the trade at all.

Was a bit awkward carrying everything back home. I managed though. Dropped everything off outside and then just sat around my place for awhile. Must of dozed off, because suddenly daylight was burning out.

This was problematic to say the least. It was Saturday, and I wasn’t about to miss a chance for a free bath. Along the way, I turned up a dumpster to see what was inside. Wasn’t much to speak of, but there was a little bit worth taking home: can of corn and a tiny packet of salt.

Entered the baths and saw the usual folks at the door-that guard who’s all business and that woman who’s about a different kind of business. Saw there were some folks already in the pool. Most of them I knew.

Jake, Maze, Sin, and a pretty quiet woman with orange hair was there. We all seemed pretty happy to see each other. For Sin though, it was pretty much “Hello,” “Goodbye.” She got up and left just as soon as I got there.

Stripped down to my underwear. Collected a towel and soap, then headed into the pool. Bathing there’s a bit weird, I find. I ain’t the shy type, but it’s just kinda weird to bathe together in mixed company. By that I mean, men and women all in the same tub. It’s not a real bother, though. Gotta be extra careful when scrubbing myself down so ‘unexpected things don’t pop up.’ That’d be a real conversation starter then.

Talk in the pool was pretty random. Got invited to hunt with Sin and Maze again. Told them, I’d take up the offer when they found me.

Jake had been beaten up pretty bad by some folks he ran into up on the mountain. He came out alive, but barely. Said the folks he fought with ended up worse. If that’s true, there must not be anything left of them.

Orange haired woman got up and out of the pool when we got to talking about time. Time and a little patience is what folks need. Time to heal. Time to let things grow. Time for things to feel normal. Time was running out by then though, and it was surely around midnight. Excused myself out of the pool after that. Got dressed, went home, and fell asleep in bed.

Woke up today a bit later than I’m used to. Pretty sure it was noon or almost noon by then. Definitely wasn’t the crack of dawn. Changed my clothes and went out for another scavenge run. Can of catfood, about six assorted machine parts was all I found.

It’s Sunday, and that means payday! This was my first real paycheck I got for working in quite a long while. Checked my hours-over 2,000 minutes spent in the shelter! Boy, how time flies. Then came the pay. $828! That’s quite a bit more than I thought I’d get paid. Stuffed that wad of cash in my backpack and went to work.

Was kind of a slow day in the shelter. Didn’t see anyone coming or going. Took the time to get some cleaning done. Started with the kitchen. Wiped down the counters, washed the dishes, even got on my hands and knees to scrub a bit of the floor. Finally got to the bathrooms after that. Had to improvise some of the cleaning tools one would normally use. Them toilets is clean now though. Dirty work, but someone’s gotta do it.

Took a break to talk to Tanner after doing that work. Didn’t get that far though. Ran into a stange woman in the hallway. Introduced herself as Macha Crow. She looked to have spent a whole lot of time out in the wilderness. Wasn’t dressed like any of us at all. She wasn’t dressed in clothes really, just dark scraps. Some of it looked like stuff she might of hunted before.

Said she’d been out there in the wilderness for years since everything went south. That’s odd, considering it’s likely only been about a year and a half since the dead started walking. Talked about a hospital she was at a couple days ago. A lot of what she was saying didn’t make too much sense. This makes my trouble senses tingle.

Still, despite my worries, I had a job to do. Gave her a tour, gave her a welcome basket. From it all, learned she had some medical experience. Pointed her out to find Kay. She also mentioned she had found some sort of police dog out there. Was interested to take the dog as her own. Asked if she could bring it here to the shelter, and I gave her the rules on that. She didn’t stick around much longer. Tapped out into the women’s dorm after that.

Spent much of the afternoon picking through the trash again. Found a can of artichokes and the remains of a jacket. Jacket ain’t good enough to use as is. There’s a lot of good pieces to it still to be used for scrap though.

Took a break at Coach’s after that. Peaches and Paul were there. They introduced me to a new girl, Inky. Dressed all ink black. Hair up in a bun like a 1960’s house wife. Got a handgun clipped to her side. Though she ain’t been here for long, she seems to know what she’s doing. Already she don’t got to live in the shelter, for she’s got a cousin to shack up with in town.

Brought up I got my first paycheck to everyone. Congratulations came from all around. Peaches was especially generous in giving me not just one, but free two shoots of moonshine! I wanna say thanks, for it’s free booze. On the other hand, I’m sure this stuff can melt paint right off the walls. It ain’t too much of an enjoyable experience. Let’s just go with thanks for the offer. Don’t think twice though that I didn’t sling them shots back. I sure did! I’m gonna pay the price for this later. Nothing about this booze sits right in me at all.

Saw Inky take her first shot. She done had the same reaction I did. This stuff’s killer. Probably, legitimately killer. What do they make this booze out of anyway?”

I’m at the pub, here, while writing all this down. Feeling a little tipsy. One more, and I’m sure drunk. Gonna leave soon, but before I do there’s something I gotta say.

Some help’s need to put up that fence I want. Gonna pitch it as an odd job. Gonna pay maybe $100 for the work. Maybe more if they be willing to help out with more. I wanna board up the windows too. Find a nice metal gate. That trailer’s gonna be a small fort when I’m done with it.

Met a new face while I was at the bar. Kali’s her name. Didn’t get to learn much from her. Called Inky, “Ignacia” though. Think she’s the cousin of that one.

Headed home and drank a whole bottle of water to get the taste of moonshine out. Also to level my head. Things are pretty much back to normal now for me. Day ain’t done yet though. Time to pop off to the shelter and see if there’s anymore work to do.