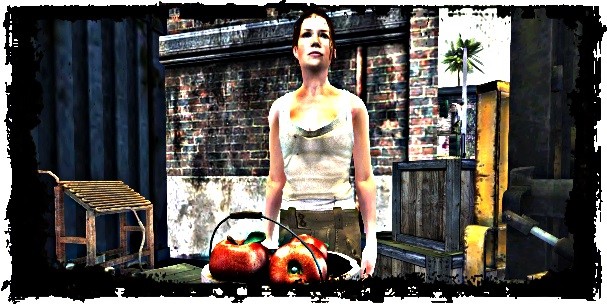 Woke up yesterday, just as Maze was going off to bed. Maze, she gave me that medical examination the other day. Asked me how I was doing and I just said doing well as I can. Things were still hard though. She must of took pity on me, for she gave me a handout of a chunk of meat, candy bar, and a bottle water. Started to turn it down, but I just gave in. Don’t think she’d let me walk away empty handed.

After she disappeared into the dorms, I just threw myself out there to salvage around. Picked up a couple cans of artichokes. Not my favorite. Think I’d rather starve than eat those.

Rain was pounding down pretty hard the whole morning. After I couldn’t stand it no more, went and sought shelter at the pub. Just found a couple folks there I seen before: Paul, think he’s a bouncer, and that bartender Peaches. Friendly sort. They was talking to some new girl as I came in. She didn’t stick around too long.

Got to talking with them all about some odd jobs: scavenging cans and bottles, cleaning things. That’s pretty much what I’m capable of doing. Was just heading out when Mia came in.

Met her just the day before, she’d just come into town right after me. Seems like she’s doing well picking around. Definitely found a lot more than me. Offered me a couple bottles of water, but I just couldn’t take both. Took one though, and drained that bottle down fast. Was bordering dying of thirst right at that moment.

Much as I’d like to stick around in the pub all day, salvage just don’t wait for nobody. Left to go poking around some more, but didn’t get far before finding Vince. Odd man, funny accent, not from around here. Showed me a thing or two about where the good hunting is. Came back with half a deer and a whole chicken.

Went back to hospital’s kitchen to slaughter the things. Put most of it in a couple pots for the fridge. Tossed in the artichokes around the kitchen. Figured I’d just give back a little on what was put my way. Met another new face, some woman, as I was throwing things around. Didn’t catch her name, didn’t stay for long.

Just hung around in the dorm for awhile after that to dry off again. Didn’t change clothes, before heading out again. No point really. Don’t want to have the only couple things I have to wear wet for tomorrow.

Bumped into Sea, who showed me around the place, while on my way out. Got to talking a little bit. From Vince, learned that man was part of them Green Peace folks. Sea was protesting, Vince was working the oil rig. End of the world happened and they became fast friends. Weird.

Think Sea thought the job is a bigger deal than it is. Said, maybe they’d make a movie out of it with Brad Pitt or some other actor, who’s name I don’t recall. Mentioned maybe, if they’re alive on some yacht out there. Sea had some doubts about that-apparently, living on the sea’s pretty hard. Probably all them folks we seen on TV is dead. That brought up when I was passing through Hollywood not too long ago and saw Abe Vigoda! Oh, he dead. He’s dead and walking around out there.

Cut the conversation off then, when some new girl named Eva dropped by. Sea was getting into the whole welcoming spiel and I took that moment to head on out. Just as I was going down, Maze called out from above. She’d just woken up and was heading out too. Made some small chit-chat before we went our separate ways. After another round of scavenging about town, just for a can of soda. Went to back to shelter and to bed.

It’s morning now, so I think. Still pretty dark out. Just couldn’t sleep no more. Done just cleaned up, changed clothes and the whole floor was empty while doing it. When it was time to head out again, there were no more than three folks just milling around out there.

Sat down in the kitchen. Ate a candy bar. Took note of the surroundings.

There’s some dude keeping his distance, lounging on a chair in the lobby. Got a cowboy hat on him.

Another guy just standing around. Big guy, dressed all in black. Don’t talk much.

There’s a clean looking lady cleaning up the kitchen. Blond hair, she’s actually wearing makeup. Don’t see that these days. Seems nice. Gave me a can of fruit. Name’s Kay.

It’s clear skies outside for now. Rain looks to have stopped. A bit too chilly for my liking, but it’s not so bad. Goal for today is to do some odd jobs and make some money. Maybe find work if I can. Meet some new folks. This town has people in it. More folks than I seen in the past year.

Donated two cans of artichokes, most of a chicken, venison to shelter.

Ate nothing yesterday, but drank some water. Ate a candy bar this morning.