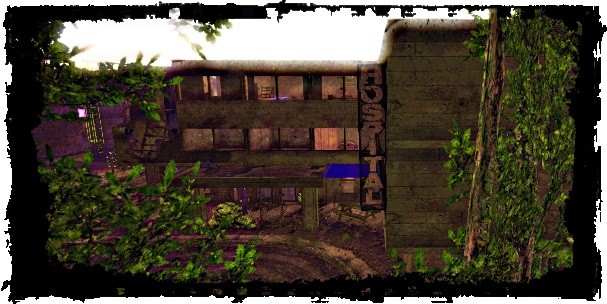 Was just sitting in my living room, finishing the last journal entry, when Audra awoke. Was pretty far passed noon when it happened. Things were a little awkward to say the least. Just last night I was threatening to shoot her dead. Later on, I took her in. Don’t think she knew how to really handle it.

She swore not to return, and I’m fine with that. Don’t much like random visitors poking around my property. That said however, if she happens to try and squat on my land again she should knock next time. That’ll make it less likely I’ll shoot her.

Don’t think she’ll be back. She grabbed her things and left pretty quickly. I was soon follow, though didn’t leave right away. Didn’t wanna make her think I was following her. Not my intention. I just wanna go out and salvage.

It was a fairly decent haul of goods today. Picked up some shotgun shells. Found a can of artichokes. Ate a can of artichokes. Found a random wallet on the ground with fifty bucks. Wallet had a bit more to it: IDs, bank and credit cards. Whoever it was, there’s no point writing about. They likely dead now. None of them cards is any good anymore anyways. I’m gonna keep ’em though, for whatever reason. In the junk drawer of my kitchen they is and that’s where they gonna stay.

Tried to sell my honey and fuel to the hardware store, but the fat man behind the counter wasn’t wanting any. Either they was too full up on stock or he just wasn’t able to make a sale. Either way, I didn’t make money. I lost money though. Bought a can of macaroni and cereal for $85. Ouch. Really, I just bought the food as to not waste either one of our time.

After my shopping around, I went into work. There wasn’t much to do that day. Few folks been coming in, so the place had stayed clean. Took to reading a bit of that romance novel I found a bit ago.

It’s awful, that book. Just a lot of long drawn out nonsense on whimsical love. Romance ain’t nothing like how they write it out to be. As hard and fast as they make it sound, that never turns into anything lasting. The candle that burns twice as bright burns out twice as fast so they say. Good loving takes time to grow. Or it did anyhow. I’m not really sure how that’s changed with the end of the world. Time’s running a bit shorter for most folks these days.

Anyway, it’s not something I’m gonna really work on for now. I need to get better settled in first, before I even think about it. There’s just too much to do. A little strange once in awhile though never hurt no one. Maybe that. Maybe not, though. We’ll see.

Anyway, I was real bored of reading. Just my luck though, a couple of folks passed through the door. Fresh meat! Only one of them was looking for shelter though, Dakota. Kind of a young guy. Seems to have some issues adjusting to the way life is now. Came from the middle of nowhere. Had some family trouble. Got some little bit of rebellion in him from smoking and drinking at a young age.

His friend was May. I didn’t get to know her too much. She seems like she been around though. Been around long enough to know new guys come to the shelter. Seemed real worried about her friend there. Was always hovering by him. Well, mostly hovering. There was a moment had to use the bathroom. While in there, she asked if we had any toilet paper. Told her no. She had to make do with whatever she had on hand. Hilarity ensued.

After showing her friend around, and giving him the welcome package, she left. Was just me and that Dakota then. Guess he hadn’t slept for awhile by the way he was acting. Kept drifting off. He soon headed into the men’s dorm and crashed.

Or at least, I thought he did. Maybe for a little while. Was in the lounge, reading that book, when I heard a commotion. Guy was crying out in his sleep.

“Fuck’s sake,” I said to myself and marched through the hall and down into the room to quiet him down.

I was thinking I’d have to smother him with a pillow or something, but he was already wide awake. Too late for some pillow action at that point. What transpired afterward is likely the longest talk I’ve had with anyone yet here.

Chatter about a whole lot of things. Where to hunt, where to salvage. Where he’s from, the fucked up family he had, the troubles he went through even before everything went to pot. Things didn’t get easier for him afterward.

It’s a bleeding heart story, it is. I ain’t having it though, no, not most of it anyway. He’s gotta get his shit together. He’s gotta pick it all up, put it together. He can carry it around if he wants or dump it out somewhere, but his shit just has to be let go. It don’t do him no good. It don’t do anyone good, if he breaks down and throws a tantrum. Likely someone’s gonna throw him in a cage or beat him senseless for that.

If he gets crazy though, I’m more than ready to put him down. I think it’s gonna happen. He’s just gonna break down and snap one day. He comes off harmless and broken, but I seen him good and up close. Guy’s a brick house. A skinny brick house, but no doubt he could do some damage. Maybe a little bit. That ain’t nothing a bullet or two can’t tame though.

I had been up all night, all day. First scavenging, then shopping, and at a later point talking. Could hear the birds start chirping and the sun was just peeking up over the horizon when I could finally step away from Dakota. Got out of the dorms and was surprised to see Vince there.

It’s good to have Vince around again. Just need Sea. Place has been to damn quiet without either of them. Vince has been alright, I guess. Sea though, just ain’t himself from what I heard. Maybe that time we almost all died affected him a bit more than the rest of us. Think it’s taken a hit on me too. I’m a lot more eager to shoot someone now, after having helped to murder that pig face man.

Oh, and Dakota had wandered out to join the conversation early on. Vince offered one of his filed down crowbars to the guy. We both pitched the various ways we could help him. Vince is good for hunting and fixing things. Sea’s good at hunting and probably knows folks better than the two of us. Myself, I just do scavenging.

Gotta keep an eye out for a radio, busted or otherwise. Vince wants them, so the three of us can keep in touch. That’s priority on my list of things to find. Also on the list, some furniture. This trailer is looking pretty empty. Maybe a table, even if it’s just crates. A rug would be nice. Maybe some art for the walls. Dart board would be cool.

I’m getting off track from the story here. There isn’t much more to say though. Catching up and helping out didn’t last long, before we went on our separate ways.