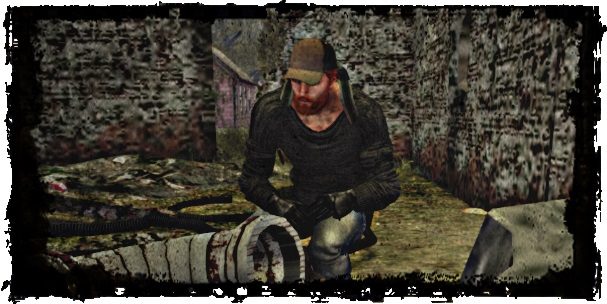 It’s been awhile since I’ve made an update, but honestly there ain’t too much to write about. I’m not too sure why I’m writing to be honest. Ain’t like there’s much worth remembering. There aren’t a lot of good, happy times here. There’s a lot of suffering, enduring, overcoming burdens. We always live to survive another day, but none of us are actually living.

There’s work, and it’s been work. Long, hard hours spent at the shelter. Honestly, I don’t even get out as much as I used to. It’s fine though, so long as the pay keeps coming in. And it’s pretty decent too, as the director of it all.

As for the shelter, it’s running as smooth as can be. We’ve still got a lot prepared baskets left, but they’re quickly dwindling. There’s a lot of meat left in storage, but not a whole lot of water. Eventually, I’m going to have to make a drink run. I’ve a pretty good idea on where to go for that, though. Sent the workers out to look at prices not too long ago. Most places charge about the same, but there’s only a few dollars difference between them. That’s not so bad.

Picked up a few new workers lately. Got Maze, Charlie, Thayer looking over things here now. Haven’t seen Sea nor Vince in a good long while. Dakota and Yuuki drop in every now and then. We’ve a small crew, but it’s all good. We’re not as short staffed as the medical folks. It’s been a hard time trying to nail down a doctor or nurse.

There’s been a few new nurses though. Eithan’s one of them. Think there’s another, but I can’t quite remember the name. The Bernes couple quit to run their shop. Kitten’s also one with the Keepers now. That’s a change. That’s different. Liam got himself in a bad way with drugs and kind of lost who he was completely. Started attacking folks in the hospital. We had to subdue him, almost put him down for good. Tossed him into quarantine until he cooled off. He’s fine now, just a bit down because his girl got shot.

Town’s been pretty empty it seems. I’m sure folks are out there, but I’m just not running into them. Then again, I haven’t made it out much from the hospital as I just said. But, picking up on what others are saying, everything’s been pretty quiet. Quiet before the storm they all say.

Not too sure what that storm is, but maybe it’s raiders. Heard talk there’s a few bandits popping up here and there. Hadn’t heard much more of any detail about them. Probably, they’re steering clear of the hospital. Smart of them to do so. An attack on this place is going to bring heat from the whole town. I’m not saying the hospital and shelter are the most important place, but it’s definitely on a short list of places folks want to keep an eye on.

Speaking of keeping watch, think we’ve got one of the infected here in the hospital. Some woman came to the door, all bloodied and not acting right. Didn’t catch her name. Stayed clear of her as much I could, but lead her up to quarantine. If she’s been bit, she’s probably too far to save by now. Nothing about her was making sense. Likely, it’s just a matter of time before she succumbs. Ain’t nothing we can do about that at this point, other than to maybe end her misery.

That’s how things are though now. If something’s too far gone, you end whatever it is then and there. Not like we’ve the resources to spend into fixing things that’ll take too much time and effort to repair. Might not even pay off at all. Sometimes, it’s just better to scrap everything and start all over from square one. We’re pretty much getting to that point right now.

Eventually, the salvage is going to run out. We’re no long going to be able to just find the things we need. Soon, we’ve got to figure out how to start producing again. Can’t say I’m too sure how we’d go about doing that. Most of the survivors aren’t real technical-they’re more brutal than anything. Sure, a few of them got some handy trades but it’s nothing that’d be considered a thinking man’s job. Nothing new’s coming about, and everything’s just put together from the pieces of whatever it we find. It’s a broken world out there full of broken pieces, broken people.

Can’t say how I feel about myself. I’m doing good. There ain’t much I need anymore, just things I want. Been on the look out for a high power rifle. Got a Keeper that told me he’d sell one; I just got to track him down. Maybe there’s a bit left to do for the house. Some weights to lift would be nice. Getting that water barrel hooked up to the water spout would work too. Place is pretty much together as it is.

Food and water been scarce though. Finding a lot of pet food, but that’s nothing I want to eat myself. Through some careful rationing, I’ve been able to hold onto a lot. If I were to eat and drink my way through everything, like if I was back in the day before the world fell apart, I wouldn’t have enough to last me the week. I might be hungry, but at least I’m not starving.