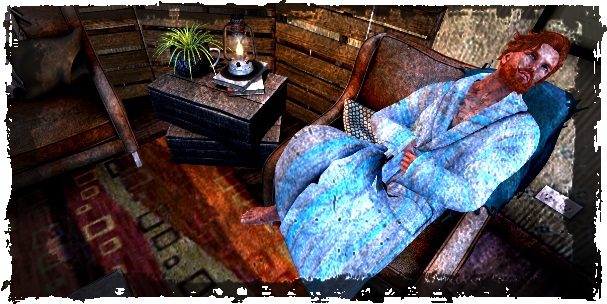 Been awhile again since I made an update. Not much has been happening here and there though. Town’s been pretty quiet as of late. Days go by where I don’t see much more than a scant soul. Not too sure where the other folks went off to.

Heard Silvi’s gone. That made things pretty difficult to get fuel. Generator was empty for awhile. Came back one day though and it was just full. Guess maybe Kay cut a new deal with one of the garage workers to keep it filled up. That’s fine by me. One less thing I gotta do.

That man, I forget his name. Maybe didn’t even know his name. It’s the dude that was leading that Keeper outfit-he’s just up and gone now too. Not too sure what’s gonna happen to them Keepers. Maybe Paul will take them up, do something with them. Not like there’s a lot of keepers around. Might just be him and Kitten now.

Thought maybe it was just gonna be another long day with nothing to report at the hospital. Was just looking over inventory list, as I usually do, when not just one but TWO new arrivals came in through the door.

Ai and Elise they were. Didn’t seem to know each other. Seems they just happened to cross paths here. Elise seems like she’s just been wandering around for awhile. Seems real appreciative to have somewhere secure to bunker down in. Ai’s a doctor, or at least says she is. Whatever. Nurses and doctors is few and far between these days. Likely should just take anyone who’s willing to pitch in on the second floor.

Anyway, I gave them the baskets and the usual run through of the place. They’s all sorted out now. Left them both to settle in before I headed home. Was pretty late in the evening when I set out. Stopped by my usual picking spots on the way, but they was all empty. Guess maybe I had already found all there was today.

So, now I’m just here sitting at home in my comfy chair. In my nice new robe. Well, not completely new. New to me at least. It’s pretty well used already. Found it in one of the houses I scavenged out of some time ago. Dunno who’s it was, but it’s mine now.

House has been fine, not much to say about it. Place been quiet with Dakota not here at all. Not too sure what he’s getting into these days. Looks like he’s still stopping by work, as I see on our time sheets. Guess maybe I’m just not catching him in time. Likely he’s just out doing his own thing. Maybe he’s gone too like the others. Who knows? All I know is I’m still here.

Remember when I was doing inventories? That was exhausting. I know what I got. Ain’t gonna do it no more. I’m just accumulating so much stuff at this point, it’s ridiculous. Even started throwing in some of them candy bars in the donation boxes now. At least they’d feed some, instead of getting more stale in my stash.