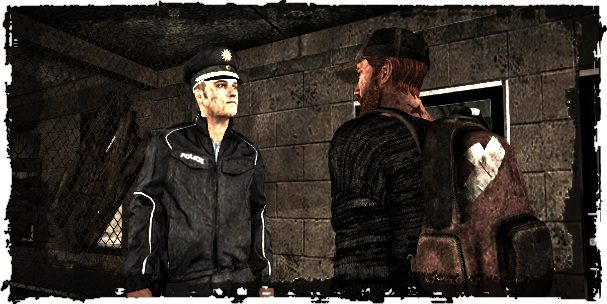 Another quiet day at the hospital, working in the shelter. Hadn’t seen anyone around lately. Not sure where the new arrivals are. Guess maybe they slipped out some time in the early morning. Maybe they’ll be back. Maybe not. Most usually do return though.

I guess maybe I’ve had a lot on my mind lately. Thinking about where I am, where I’m going. Dawned on me lately that I’m not just in a position of surviving anymore, I’m actually living. Got a job, enough money, plenty of food and water for myself. It’s a time like now that I can do some forward thinking.

And that’s where I get stuck. Everyone’s real nice and cushy, and if I keep on this path it’s probably not gonna change. That’s good, and it’s bad. At least I’ll be doing well for myself, but maybe I’ll stagnate. Not like I’ve the liberty of an open road anymore. Long gone are the days where I was roaming about. Now, all I do is sit and stand and read notes and hand out baskets and give tours. Just need a little something to do outside of work.

And work’s been work. There’s been a lot of it. Not much to do really other than count the baskets and make sure we’ve plenty of stock. Apart from yesterday and this morning, ain’t no one else came by. Missy, from the Dollhouse, dropped in though. Came looking for pregnancy testers. I’m not supposed to hand such things out, but I went looking for them anyway. Didn’t find anything. Said I’d ask some nurse or doctor if they had any though. Missy disappointingly left empty handed.

Just stood in the lobby for awhile after that. Milled about the empty rooms and halls of the hospital. Eventually, I made a visit to talk to Bo Tanner out front. He don’t say much, but when he does, he’s kind of a real dial tone. It’s just a lot of small talk between us about nothing important now. He’s heard all of my stories, and I heard some of his. Kind of like we’re an old married couple now that doesn’t got much to say to one another. All we have is pretty much the security that we’re not too far off from one another. I need to get out more.