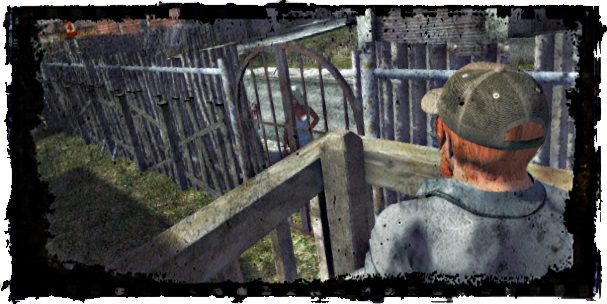 Well, it’s sure been a night and a day. Things are moving pretty fast and I’ve no time to stop. Place to go, people to see or is it places to see people to be? Kind of feels like a bit of both, honestly. Run here, do this, do that. Be this person to that guy, a different dude for this one. I’m wearing a lot of hats these days, and I ain’t talking about the one on my head.

For the AES, I’ve been its shelter director for a long time. That means, I’m its tour guide too pretty much. But, also, I kind of run around from time to time tracking down whatever it needs. That could be medicine, a supply run, or in today’s case meeting the right folks for the job.

Garage was the first stop of my morning. I’d been walking by all casual like for a couple days since the dead laid siege, hoping to catch someone inside. Today though, today I lucked out. Was Chava in there today. Spoke to her about some repairs; not just on my own place, but the hospital as well. My place is pretty dinged up on the outside, but it ain’t hardly bad. Could be made worse if not taken care of though. AES’s got more important issues. Dead busted up our generator somehow. Lights hadn’t come on since then. Our gate too’s pretty smashed up and that needs fixed. Chava said she’d work on it and pass the job around. Sounded good to me, so I left it at that.

Headed out to AES next. Lobby was already full there. Ai was just finishing up with a patient and ran off almost as soon as I arrived. Pretty much left me and Paul there to our own devices along with a couple other ladies. Kendall and Varona were their names. Sounded like they had some history way back in Arklay just after the outbreak that brought everything down. Talked about the time there were police officers under the AES. Must of been a long time ago, since I can’t recall that.

I been finding some police stuff here and there around the AES though, so makes sense. Seems though, from what else they said, there’s been a few times the law changed hands. Was them, well us at first in the AES. Then was these guys in Deimos. Don’t know much about that group, but I heard about them before. Was some sort of paramilitary group in the mountains. Had some scientists too in there. Real strange. Anyway, was the Keepers then and that’s what it was for a good long time. Keepers is gone though, now there’s no one to keep the peace. Maybe with these ladies back, AES will pick up where other folks left off again.

We need some security around here. Got big problems with a horde of undead hanging out down by our shores. Came in that wrecked ship just down yonder. They ain’t moving much right now, but they’ll figure their way up eventually. When they do, it’s going to be hell on all of us. Honestly, I ain’t too sure how to handle them. That alone stresses me out and I just feel like I’m letting folks down. Usually, I’m the man in the plan, but not in this case.

Dakota, when I met up with him down at Coach’s last night, brought up Paul wanted to burn all the dead up. Figure maybe it’s the best way, but I can’t say for sure. Maybe the safest way, as we won’t have to come in contact with them at all. Still, I worry about things getting out of hand. Last thing I want to do is chase after some flaming man-eaters away from buildings and other folks. They’re one thing when shambling around, but when on fire and doing such? No thanks.

I’ll just keep killing the few that wander out and looting the corpses. Sometimes, looting ain’t so clean. There’s rarely a chunk of their rotting flesh on the goods. I just been picking it off and throwing it in the trash. Maybe I should be more careful with it though. Been looking like something’s sorting through my garbage. Raccoons, I guess, maybe. I’ll think about setting out some traps sometime.

Dakota actually gave me a lot to think about in our talks. Lots of memories, lots of good times. Some not so good times. Mostly fun from what I recall. Quite the pair we was! Might still be some adventure left. Might be something more to it. That’s an entry for another time though.

Back to the AES and talking about the problem at hand. We’ve lots of problems. Fortnuately, Chava came by to fix at least one of them. In no time flat, she got the generator running again. Finally, we got some much needed light on our situation. It’s not enough though, there’s still that gate to fix. She pointed out to me that some of the chain’s pretty weak and buckled. Anyone puts enough force onto the thing, whole setup will collapse. Lucky us though, garage has enough chain link to spare. They just need some help dragging it down. I’ll just add teamster to my list of roles and handle that tomorrow.

At some point, Dr. Kay had floated me some cash to pay for the AES repairs. Awful nice of her to do so. Was $3,300 in sum. Odd number, but probably enough. Dished $300 to Chava and that put us square for the generator. If the cost for fixing the generator is right, maybe we’ll have a bit left over to renew our refueling contract for the thing. I hope so at least. I ain’t made of money, but I got enough. Just don’t want to go bankrupt keeping the AES in ship shape.

I’ve got bills to pay and mouths to feed. Namely, my own mouth. Got to take care of number one! And I guess maybe keeping the shelter folks fed too’s good. We ain’t running low on food yet in the shelter, so I ain’t at all worried about that yet. Probably won’t be for a good long time. My main concern however is just keeping my own shelter in decent condition.

After handling overseeing repairs outside the AES, I headed home to look over my own place. Hadn’t changed at all since last time I had a good gander. Guess I can count my blessings in that. Inside’s pretty good though. Everything’s just as I left it. Got to be careful though, lots of raiders in this territory and you can never be too safe. Why, just that evening I thought maybe I’d had a run-in with one of them. Was prepared to make a shotgun greeting, just in case.

Wasn’t the case though, was just a neighbor. Learned she lives behind me and her name’s Jasmine. Jasmine or Jordana depending on who’s asking. Works down at the Dollhouse. She seems smart enough on her feet. Guess she’d have to be, because she’s yet another returning old timer. She been through mercenary raiders, cultists, and worst storms than the one we just had. Lots of experience there. Likely would be a good idea to keep her around.

We made a good deal of chitchat with one another, before she headed home. Promised each other that maybe we’d look after one another. Told her, she runs into any trouble to just scream. I live right next door, so chances are I’ll hear it. Wondering myself what she might hear from my place. Should of told her if the trailer’s a-rocking, don’t come a-knocking! She’s a smart girl though, I’m sure she knows that by now. It’s common courtesy, a life lesson. And these days, if you aren’t fast to learn, you going to be fast to die.