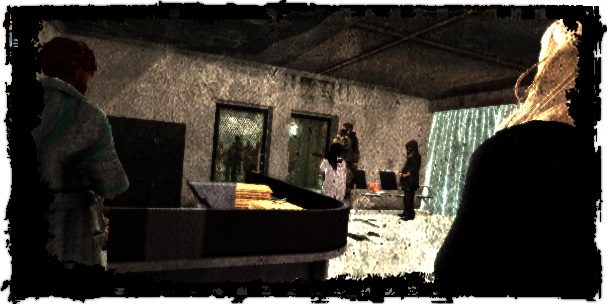 Yesterday was my birthday. October 23rd was my birthday. Happy birthday to me! What’d I get? Interrupted sleep and a horde of zombies. Can’t say I’m crazy about the gift, but it’s the thought that counts. And whoever thought that up for me can just shove it. If God exists, he’s got a funny sense of humor.

Dead at the hospital doors seemed like they was going to be a lot of trouble, but they weren’t so much. Barely made it passed the gate. Couldn’t get through the doors, on account of Paul and some others shoving everything they could in the way. Kay, Kali, Paul, and Jasper were nearby, arms ready to shoot at what came in. And so was I! Shotgun loaded, but little of anything else. Things were on such short alarm, I didn’t have time to get properly dressed. Met battle in a bathrobe, I did.

Fortunately though, folks from the outside were able to pick the dead off. It’s kind of a dirty shame. I was looking forward to having them dead ones slip on the floor. Poured some slippery soapy water on the tiles so if they came in, they’d fall right on their faces. Easy pickings then.

Battle ended pretty quick, without us inside having to do anything. But it didn’t end without casualties. Them dead guys bumped the generator pretty good. Lights haven’t been on since then. Ai, Stephanie, and me took to putting together what candles and flashlights we had to brighten up the place. It’s okay, but it’s not great. We’ll probably have to ask the garage to look into fixing the generator up. Can’t have this place running without power. It just don’t run at all.

Speaking of the garage, I’m going to have to have them look at my trailer too. It made it through the storm, mostly in one pieces, but it took its scrapes. Outside’s pretty banged up something fierce. The windows though, they’s good. Had them boarded up for a long time before the winds picked up. Nothing got through the boards, so I count myself real lucky on that.

Luck’s being passed around quicker than one of them Dollhouse dolls these days. That farmer Darla mentioned before, Ein, he showed up recently. Came in pretty beat up, Bruce was the one that found him. Hauled him all the way to the AES on a bike. Ein sat around for a few days in the hospital recovering. Don’t think he got a lot of help. At least the bed rest seems to have done him some good. He’s doing a lot more walking now than he used to.

So, yeah, yesterday was my birthday and not much came from it. No one even gave me a present. No one said anything about it. Of course, no one really knows about it. Think maybe I was asked it once when I first arrived. It’s in some file somewhere now, surely tucked away in the back of a filing cabinet. It’s no big deal. Not like there’s much to celebrate anyway. I’m alive, and that’s what matters. There’s just not much to live for that matters though.

Maybe I’m in a good place now to start looking into all that. Been giving it some thought recently. Got everything I need, but now there’s a few things I want. Not physical things mind you, not too many of those. Running low on water, so maybe that’s the exception. What I’m going to start looking for is things that can’t be bought. Can’t say I’ve many folks around here I’d call a friend. Maybe there’s just one fellow, but he’s all business lately. There’s acquaintances and such and we get along just fine. I don’t know much about them and they don’t know much about me.

That’s been the status quo though, just keeping to myself. Working up people takes a lot of time and energy. Not always does it pay off neither. They die, they move on, and you’ve got to start from scratch again. Was like that when I was on the road before the Outbreak, was like that again when I was traveling after it. Here though now, these people settle pretty much for good. Might need to start tapping into what’s around. It’s about time.