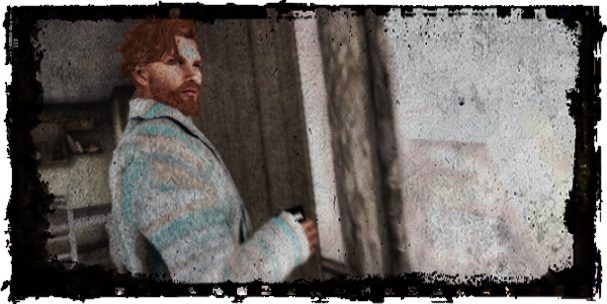 Awoke to a different sound yesterday. Usually, it’s one of the dead ones bumping up against my fence or a new neighbor moving in. That time though, it was the hard rain and wind pounding  on the trailer. Kind of unnerving. Could feel the walls giving a bit as they made this awful moan.

Thought maybe I could just lay about in a robe at home, read a book, ride out the storm. Didn’t let up though and it just got a whole lot worse into the evening. Couldn’t stay there anymore, not right now. Too dangerous. Might kept swept away by all these winds! Living in a trailer, during a storm like this, you got to leave. These things tip over easily. Find shelter elsewhere, or in a worse case scenario, dive in a ditch.

Luckily for me, I’m already well familiar with the AES shelter. Couldn’t leave unprepared, though. Picked up a flashlight, handgun, put on this winter coat I been saving and head out. Wasn’t easy getting to the hospital. Rain was coming down pretty hard, was pretty difficult to see. The wind blew, and is still is blowing, with some force. Took me way longer to reach my destination than usual.

Found Dakota at the hospital when I arrived. Hadn’t seen him in around for awhile. Didn’t have too long to chat, though. Soon as I got there, I gave word that I’m about to do something crazy; go out and search for survivors in need of shelter.

Took a tour around the island. Stopped by the ATC, but the guy there wouldn’t budge. He’s content well enough to sit at home in his dugout burrow. Went to the garage next, and there were a few folks there; Missy from the Dollhouse and some others. Convinced them to drop by, but first they had to board up their businesses. After that, peeked around in windows and alleyways for folks. Didn’t see no one. Headed back to the shelter.

When I came back, found I wasn’t the only one there. Dakota and Dr. Sinthia were in the lobby. Doctor split pretty much as soon as I arrived. That just left me with Dakota for a bit to catch up on things.

Seems he’s troubled by something. Not sure what it is, he didn’t say. Maybe we’ll crack that nut later. On a side note, he’s missing a flashlight. Either I can find the thing or buy him a new one. Money’s no object to me right now. Working for as long as I been at the shelter, I’m Oprah rich now! Still, Dakota wasn’t a fan of being handed something. Guess maybe I pushed him to be a little too self-reliant. Talked him into accepting a new flashlight anyway, if I could find one.

Had a good rest, a drink of water, and a nice chat. Nice enough, I guess. Soon as I felt ready to face the storm again, I headed out. Went out to the Fringe to see if anyone there needed help for a way out. Went down to them houses along the shore and found Alba with a horse. She’s not fond of hospitals, so I recommended maybe holding out in a nearby cellar. She wasn’t having it, not with that horse that couldn’t make its way through down there. Tried to convince me, she did, to allow that horse into the hospital. We’ve no place for it. Then, she brought up seeking shelter in the church. Might be a decent place, but there’s too many windows and there’s a good risk of trees crashing into the place. Finally, Alba settled on fortifying her garage and waiting in there with the horse. She needed a few things, like wood and cables. I got the wood and offered it to her, but I couldn’t stick around to help her fix the place up. Was still a few places to check out, so off I went on my way.

Didn’t see no one else on that run. No living person, none of the dead. Seems like the dead ain’t fans of this storm either. Don’t know where they could be hiding. Came back to the hospital after that and just hung around for a few hours.

Was pretty far into nighttime, when I set out again. Made my way to the Eights then. Found Darla there along with her new boyfriend, Benji. He don’t talk much. Kind of reminds me of this other guy that used to be in the Eight’s. I’m talking about that one guy that was Adrianne’s friend; the one who looked after their corn crop.

Learned that farmer, that beanpole looking fellow in the overalls just up and disappeared. She think maybe he got ate. Real unfortunate to hear that. Any farmers come the shelter’s way, I’m to direct them over to the Eights. That’s just what I’ll do if one comes by.

Told Darla, if there’s anyone she don’t want to let in during the storm, just direct them to the shelter. Offered some of our scrap meat to help them get by during these troubling times, but she turned it down. She offered a jug of water though, which was great. Took that real easy. Said my goodbyes and then hauled the thing all the way back to the hospital. Wasn’t easy, but I made it back in one piece.

Stayed there for the night. Probably going to be doing that until the storm lets up. It’s morning now and the storm rages on. I can tell it’s going to be another hard day of scavenging and luring people back here for safety. Such is the way things are now though. If we’re lucky, maybe we’ll see some low numbers for a body count in the aftermath of this storm.