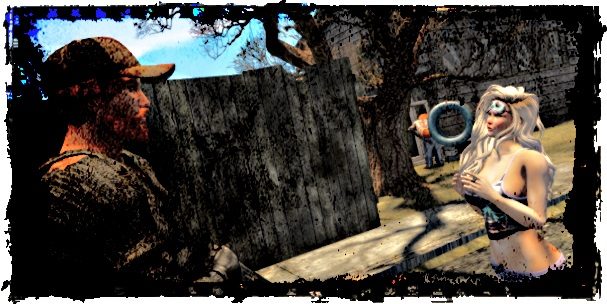 Weird things been happening in this middle of nowhere town. Thought I’d seen some fucked up things before, but something lately takes the cake. You know folks been harvesting meat from the dead guys that walk around? They been drying it out over fire, putting it on a rack. They don’t eat it, they huff it! They huff it to get high! That’s just right up insane in the membrane. Insane in the brain.

Don’t get me wrong, I like a little joint here and there. Huffing zombie meat though? No thanks. I seen what it does to folks. Gets them all messed up real bad, like they don’t know who they is nor where they are anymore. Don’t know what the good effects are. Maybe the whole thing plays out like meth. But, I’ve seen meth head lot lizards back in my day and they weren’t at all cracked out as close to this new thing.

If this is going to be a problem, we got to nip this in the bud. Gotta look out for wherever it’s being cooked and smash the place. Can’t have this stuff running around about town. Too dangerous. Dangerous, even for the side effects of the drug alone. But, can people also “turn” with this stuff? I don’t know, and I don’t want to chance another full out outbreak. Best to destroy the stuff, when it’s found, and get the word out on it.

That overdose was the biggest exciting thing in the hospital lately. We ain’t had much more than that. Did get a new first arrival though, first one in a good long while. Alba’s her name. Met her briefly outside of here back in those houses at the edge of town. Was clearing out the dead when our paths crossed.

Anway, gave her an apple and some water to help her out. Maybe it’ll help bring her to some senses. What I gave her didn’t even dent what food and drink supplies kept aside for myself and the shelter. Shelter’s doing good! It’s got 68 complete baskets at the time of me writing this. We’ve got over a hundred items of food too in reserves. Mind you, the reserves ain’t great; lots of scraps and unidentifiable meat chunks. They’ll be something of a last resort to hand out. Still need drinks, like usual. Water preferably. Shelter itself could use some goods: lightbulbs, bed linens, cleaning supplies, laundry supplies, pots and pans. We’re good on fuel for the generator. Paid Dane out at the garage to keep the thing running for a whole month. That whole hospital outfit is the neediest thing, I swear.

Myself though, I’m doing good. Think I finally got my trailer in a respectable place. Took a few months to get there. Pulled a few sticks of furniture from nearby houses. Made a couple shelves myself. Stuck this blanket on the wall for some art. Might look a little shabby, but the place ain’t empty no more. Think I’m gonna be fine with how it is for awhile. Things are gonna work out until the lights go off for good.