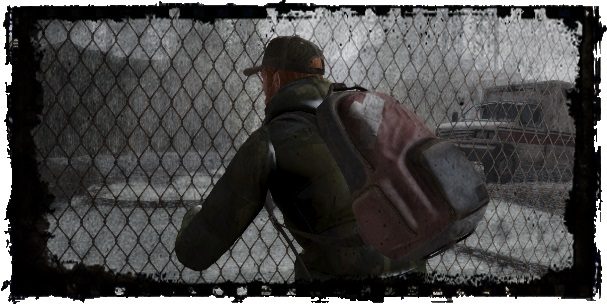 They just keep coming. Got three new survivors yesterday at the shelter: Herc and Milly, both history buffs, and Trouble. Trouble didn’t speak much, but at least she followed the tour just right. Them other two squatted down in the kitchen and didn’t move for the rest of me showing around. It’s fine, I guess, at least folks is coming around to the shelter now. We had a good, long dryspell before recently.

Still, with all these folks coming in, it’s not putting a hurt on supplies. We’re pretty well stocked. Got a surplus of water, thanks to the Eight’s contribution. Did a bit of hunting before the weather picked up, so we’re good on food. Think maybe I can stretch our stores out a bit, even if we do end up feeding everyone that’s dropped by due to the storm.

Storm’s gotten to be something fierce, by the way. Winds blowing real hard, the rain’s just coming down more and more. It’s a real typhoon out there. If Arklay don’t get run down in all this, I’d frankly be surprised. This old town’s not what it used to be. Not that I ever saw what it is, but you can still get a good picture of the way things used to be. Something tells me though, it might of been a bit rundown to begin with.

Speaking of places falling apart, I’m hoping my trailer’s there when I get back to it. Haven’t been there in a good while since the storm. Too dangerous to set out that way now. At least I locked up before I left. Did I lock up? Pretty sure I did. Force of habit it’s become. I’m sure it’s all fine, for now, until it tips over when this storm huffs and puffs.

I’m just hoping it’ll end before tomorrow. That’s free bath day at the Dollhouse. After all this mess, I sure could use one. Ain’t a day I been soaked, had my clothes caked in mud. Laundry bills probably going to cost a pretty penny, but it’ll be a drop in the bucket compared to what cash I’ve on hand.

Hope Missy’s okay down there. She hadn’t come by the shelter like she said she was. I’m half-tempted to brave the storm to see if she’s alright. But, it’s risky. Might not even make it back at all. Well, wherever she is, hope she’s alright. She’s been here long enough and seen worse. She’s likely making out alright.

Meanwhile, this storm’s going crazy and it’s business as usual at the shelter. Clean, welcome folks, keep things organized. Being here all the time lately, I tend to run out of chores by the afternoon. Now, there’s not much to do but just sit here waiting for things to blow over.