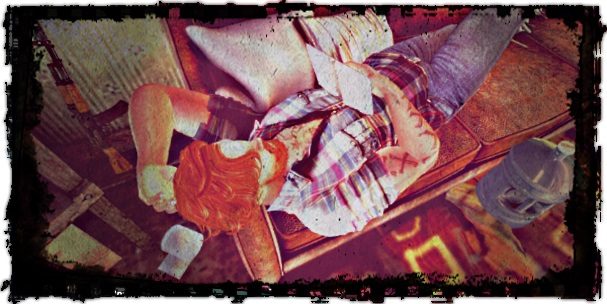 Been awhile, hasn’t it journal? Not as long as a break as I’ve had before, but it’s been a minute. There’s a lot that happened, but not really much to say. Things is still moving along pretty smooth for me.

Trailer’s been repaired, thanks to Chava and the rest of the crew at the garage. Took about $4000 to get everything patched together, but it’s worth it. Don’t have to worry about the outside walls just crumbling down. The roof’s not leaking anymore either. Everything at home’s staying warm and dry for the moment. Good thing too, because the weather’s likely going to get colder soon.

Paying for repairs was just a drop in the bucket for the cash I’ve had on hand. Kind of makes me nervous to be walking around with a big chunk of change. Not that I’m always carrying everything I got on me, some of it’s at home. I can’t be in two places at once to protect my stash though. In an effort to just lift myself from all this burden, I’ve been doing more shopping and trading than ever.

That S’Mart hardware store provided me with a few useful things for myself and the AES. Borrowed a couple books from their single shelf library. First one was a handyman’s guide to home projects. Read that one and swapped it out for another: The Madman and the Music. Got enough batteries and candles for the both of us now. Bought myself a new outfit. A few other odds and ends here and there. Got a toothbrush now, but not toothpaste. I guess water will do alright, unless maybe Lye Bernes and More got something for that. The biggest thing I’m most thankful they have in stock is toilet paper! It’s one ply, which is fine enough. Can’t expect to get the best on the island. Beats having to clean myself up with old newspaper, I tell you what.

Down at the ATC, I’ve been wheeling and dealing too. Bought myself an assault rifle, FINALLY, after spending so much time looking for one! Got a free box of ammo for it too, and I bought another box for just in case. While I was there, I traded half of the Shelter’s scrap meat for some better food: grilled fish. It’ll last longer and likely won’t get folks sick. Can’t trust that meat you pull off the scavenger critters around here. They just get into the most vile things.

Been doing a lot of business for the shelter lately. Before I even went to the ATC, I took that other half of scrap meat and traded it with Peaches down at Coach’s Pub. Got some bottles of shine for the Shelter-for whatever reason. Got a bit of cash for it too. Not keeping it myself, of course, that’s a stash I’m setting aside specifically for whatever’s needed to keep the operation going.

So, things is going along pretty well for me I’d say. There’s not too much more I’m looking for. A rifle, maybe. I don’t really need one, but I’d like to have one. More toilet paper is always nice! Need more soap, and for that, it’s going to come from the Lye Bernes folks again. It’s pretty hard to think up all the things I need. I head into a place with intent to buy some good stuff, but it never occurs to me what to look for. Even looking around my trailer now, there ain’t much that pops into mind. Maybe it’ll come to me eventually.

It’s been a busy last few weeks, to be sure. On top of all this shopping, we’ve had A LOT of new folks coming into the shelter. Right now, I’m counting eighteen. That’s the most we’ve ever had since I became director. I’m anticipating seeing more by the end of this month too. Much as I’m happy seeing new folks join us here in Arklay, I’m a bit uneasy seeing out Shelter stocks dwindle. They’s fine for now, and I’ve a lot of baskets left. Traffic keeps up like this though, I’ll probably run out some time next month.

Folks have been pretty generous with their donations, though. Dale down at the S’Mart gave us a jug of water. Got some more water today from Adrianne. There’s been a few other contributions here and there, and I’ve even been buying up some. So long as I stay on top of things, I think I’ll be fine.

Tomorrow though, we’ve got a salvage run planned. If things go well, maybe we’ll be setup for awhile longer at the AES. Like always, we’re looking for food and medicine, but that’s not all. We’re looking to just grab whatever we can, whatever might be useful. Now that the AES has expanded its security team, and even added a lab, our needs are greater before. We always got to keep a good eye out on good loot.

Maybe Dakota and I will find some useful stuff in some old abandoned house he found about a mile and a half away from the island. Don’t know what’s in it. Don’t know who’s in it. We’re real interested to find out if it’s got anything good though. Whatever’s trouble’s in there, if any, we can handle. We’re quite the team, he and I, and have been through some pretty tough moments. Could say we’ve had our ups and downs too.

Something’s been bothering him for awhile and he just won’t say what it is. It’s fine, that’s his business. Whatever it is though, it ain’t me-so he says. I’d believe him though. Things will work out for him. Or not. Probably will in the long run. We’ll see. He’s pretty capable of sorting himself out these days. Wasn’t quite the case back when he first came here. Was quite the mess, but I lead him through it to become a better survivor. He’s taken decent enough care of himself. Could say I’m rather proud that my mentoring has rubbed off on him. He’ll at least live to see another day.

Soon it’ll be a new day with the same old struggles. Things could be worse. They’re likely to be worse. I wouldn’t say that’s being negative, but being real of our situation here. You just can’t seem to win in Arklay, but you do a little better each time.

Been awhile since I took inventory of my things. Let’s try that again.