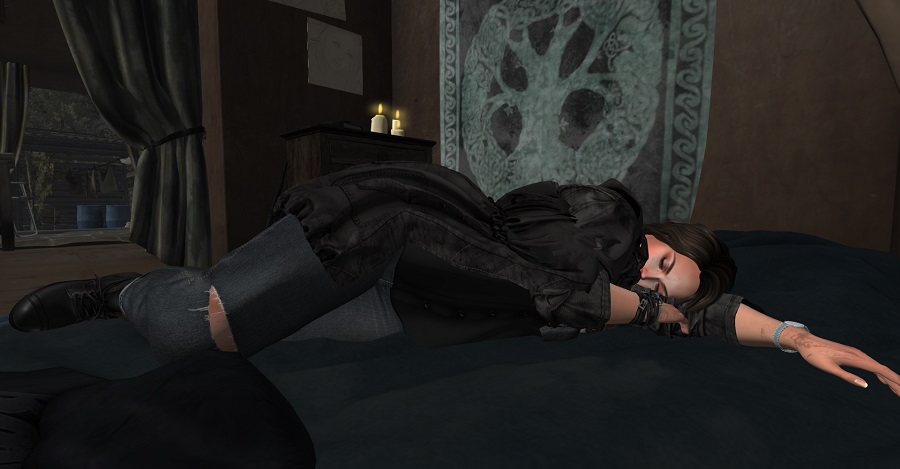 Sick all day. Getting worse. Too hungry to sleep, too tired to do anything. I fought through. Had to. Made myself get up and go hunting. The elements were against me. It rained all day. For hours I stood out in it under the trees waiting and watching. The first few hours were a bust. I saw a chicken, deer, and badger and all escaped before I could get a shot off. With ammunition limited I couldn’t afford to take the risk. My lack of skill frustrated me. I walked the streets looking for anything remotely edible before returning to the woods. Others were hunting. I stayed back out of the way. Didn’t want to be mistaken for prey myself. How more people aren’t “accidentally” shot out here is a wonder. Maybe that’s only a matter of time.

As the rain continued to fall I stood behind a tree watching a woman doing calisthenics in a clearing – with a gun in her hand. Only in Arklay. I could have laughed. I didn’t want to get shot. I waited until she left, took her place, and waited for animals. Nothing. Another hour or two passed. Defeated, I started home. I heard animals in the bushes but couldn’t find them. I circled back through the woods. By now my clothes were fully saturated and the sickness was becoming more prevalent. I had to push through and keep going. Without food I was only going to get sicker, though the effort of hunting was making me sick; It was a catch 22 situation. Then, out of nowhere a badger appeared. Raising the rifle I took aim and fired. It took two bullets to take it down. The win was enough to spur me on to wait a while longer for bigger, better prey. Then another hour passed and the excitement had waned. I decided to head back to camp. Wouldn’t you know it, a pig stepped out. I shot it. Three bullets took it down even at close range. In the end there was only enough meat salvageable for one meal but it was enough. I’d caught something. The day wasn’t completely wasted, even if it had taken all day to do it.

After cleaning the meat I headed out again to scavenge. Bad luck had returned; I walked away empty-handed. Since the trash-site was close to work I stopped in to the S Mart. I was too wet and too tired to bother sweeping like usual. Instead I sat and counted stock. Then all of a sudden the sickness came over me. The noise from my belly came first; a loud low rumble, and then the stomach cramps. I waited it out but half hour later, if that, they had returned with a vengeance. I grabbed my bag and gun and headed out again to the hospital. Several stops were made en-route to squat in the bushes and behind a crumbling wall on the way. Luckily none saw. If they did, they didn’t shoot me. The pains were getting to that point I wouldn’t have minded if they had. I staggered in past security, lost my gun, and waited in the lobby beneath the secretary’s stare and wrinkled nose for someone to tend me.

Just like last time it seemed to take forever. Unlike the times before I wasn’t forced to flee without treatment. A nurse arrived and I recognized her from my first day almost a week ago (Evangeline, I think?). Had it really been that long? Some ways feels longer. She was tired and yawning often and took me into a side cubicle area where she diagnosed dysentery – as predicted. I’d treated Jamie with it often enough to know the signs. Unlike my life before Arklay there was no drug store to run to. I even told her I’d tried to self-medicate with prescription pills to no avail. She grunted at that, but she was lovely in treating. She even let out a ripper fart after I did to show I had “nothing to be embarrassed about.” She arranged some antibiotics while I hurriedly filled out paperwork – good to see not even the end of the world stops the red tape – and gave me a few bottles of water as well as a steak to keep me going during my recovery. I paid her $200. I offered to pay her more. The relief of having treatment and simple peace-of-mind felt worth it to me. She declined but wished me well just the same. She even gave me a jar of honey on the way out. Said it will help if I ever feel low and deflated again. I told her she was a life-saver. She downplayed it. Living alone out here in the woods is a blessing as well as a curse. If something happens to me who will know? Her gesture and help meant the world to me and I hope she knows that. I even said when she swings by the S Mart next time I’ll give her a great deal. Not sure what Dale my boss would say about that but I think she’ll be okay; even if it has to come out of my own pocket I’ll find a way to return the favor. I even dropped a can of food in the donations container outside the hospital; a small way to pay it forward. Someone has to. We can’t all be GI Joes and Jane’s at the end of the world, can we?

I returned to camp and now finally it’s no longer raining. There’s a mist and clouds out and I feel colder than I’m sure it is but I’m laying in bed as I write this. Determined to get warm. Not sure I will leave the camp tomorrow. Likely not go to work. If Dale could hear my belly or smell the side-effects of this tummy-bug I doubt she would mind. Lesson learned; stop eating pet food and stop drinking from wells! (For now at least, hopefully forever!) Tomorrow will mark a week that I’ve been back on the island; the first week of many perhaps. What a week it’s been. Going to sleep now. Rest. Goodnight my babies, sissy, Doc and Kane wherever you are. I miss you all. I’ll see you again, one day. xox