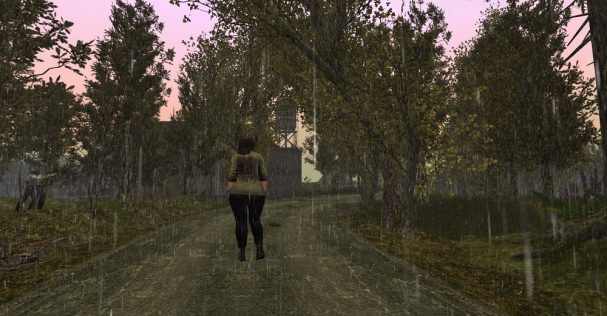 It’s been raining all day. It feels like forever. The mud had built-up beneath my shoes so high I felt to be walking on platform boots made of cement as I slipped through the woods seeking shelter from the wet. Everything feels heavy from saturated clothes to the pack on my back. I passed campsites but dogs barked or fires flickered telling me that people resided within. I didn’t dare go in and risk getting shot. I fell to all fours and crawled at the last too tired to cry. I even prayed to God to help me even if I know He’s not there much less checking His emails anymore. Then I found the gate to the metal fence ajar before me. I peered in and saw no movement. I crept in crouched low surveying my surrounds beneath the driving rains. Except for trees and bushes bowing to the elements nothing moved. I waited against the fence and I watched until finally aching muscles demanded that had to keep going.

There was a second fence ahead better fortified than the first. Whoever lived here appeared set-in for the long-haul. Barbed wire lined the top of fences and wooden spikes sat before two huge wooden gates. There was a lookout/tower type structure peering over a crop of corn I think. It’s wilting and in no condition to being anywhere close to harvestable not that I’m any expert. A massive pile of trash sat to the right. It looked like general discarded useless broken crap mixed with daily debris and had a funky smell. It made me wonder if it was on purpose to keep the dead-heads away. I don’t think it worked too well. The gates behind the spikes were open. After a lot of psyching myself up I peered inside. No gun-shot’s rang out. Nothing else moved. It was eerily still beneath the falling rain. It put me on edge even more as I crept in.

The camp consisted of two shacks and a trailer and off that a sagging blue tarp. The first was a hoarder’s paradise with tools, boxes, drums and shelves full of clutter, and in the other towards the back a makeshift shower and water left to grow stagnant in buckets and metal tubs. The double doors to the trailer were open. The front door was locked. I climbed up inside using the back. The stench inside was rank. Rotten food sat on the table from an open can and a plate. Flies buzzed thick as their worming offspring made the meat chunk appeared to writhe with life. Pulling my shirt up to cover my nose and mouth I crept in further. There was a mattress out back and clothes on the floor. The blinds and cloth drapes were for the most part drawn and coated in a thick layer of dust. It didn’t appear as if anyone’s moved them in quite some time. It didn’t look like anyone had set foot within for days at least but I decided the risk of finding out otherwise wasn’t worth it. Yet. I left the trailer but stayed low in the corn field wary of movement or possible approach of the owner. I didn’t think they would take kindly to my presence and likely shoot first ask questions later. The day dragged on. So did the rain. I waited. And just like before physical necessity and curiosity got the better of me.

Scraping off as much mud from the soles of my shoes as I could I wandered the camp again and this time took to checking the external fence perimeter. I should have done that to start with. Towards the back it was initially hard to see beneath the shade of tree canopies but the dent in the land contained the evidence even if the rainwater was slowly diluting to wash it all away. The pool of blood was significant. The break in the fence telling. There was an arm poking out of the mud with three fingers curled on what remained of the hand. Bite marks scored what flesh remained. There was no head, no torso, or anything else. It didn’t take a genius to figure what had happened but it alerted me to the possibility that the thing that did it was still lurking nearby. I returned to camp and preceded to close it up behind me as best I could. From the trash pile I dragged out wooden doors and pushed them against the hole in the fence. I pulled a sheet of corrugated metal as well and using my wet jacket to hold each side so I didn’t cut myself and for traction I dragged it through the mud, through the gates, and up against the fence. I secured it all with a wooden beam. Thanks to the rain it felt like a marathon effort. I closed the gates, locked them, and staggered to the trailer. I tossed out the rotting food and waved a dirty shirt on the ground to vent the smell. It didn’t work as quick as I’d have liked. Too tired to keep trying I closed the doors and shut myself away, all the while praying that the owner didn’t return or didn’t have an accomplice. I waited and listened to the rain fall down until exhaustion claimed me. It didn’t take long, sheer minutes perhaps, and I don’t even know what hour it was that I faded out or how long I slept but I slept heavy. I woke sometime later feeling wet, hungry, and cold.

The bed at the rear of the trailer was nothing more than a mattress on the floor with a few pillows and blankets but it was the closest thing to a real bed I’d felt in a while, at least that didn’t feel boxed in like the beds at the hospital or AEGIS tent. When I woke, I ate. I used the rainwater collected in a bucket on the floor set out in the rain to use to wash myself. There was an old army jacket on the floor that I shook out and pulled on. Like the rest of the clothes found inside it was sizes too small it’s impossible to close up but it keeps my arms and lower back warm at least now that the weather has taken a turn for the worst. With wet heavy clothes back on and rain heavier now, I set out whatever pots or pans I could find around the camp in an attempt to catch what I could, and reluctantly prepared to leave the camp. Just like before the water made it harder to see and slower to again walk through the mud and the woods between here and town. I didn’t want to leave and feared that someone else would claim it in my absence but it was a rick I was forced to take. I returned to Arklay and back to the S Mart in the hope I could trade some of the useless ammunition I had found for supplies that I need – like food. Without that the camp was useless.

I met Dale, my boss. At first I thought she was a customer. She’s small and pale with tired eyes and a demeanor that says she’s not to be fucked with. I guess she’s had to grow a thick skin to beat her competitors in the trade market. She was lovely though which surprised me. Gave me food and water AND money for the ammunition. I could have kissed her right there on the spot. Maybe if it wasn’t for Ame, the S Mart security personnel who stood nearby with gun in hand and thousand-yard-stare straight through me I might have. Well I’m joking. But the two shared a camaraderie I have yet to experience here. It reminded me of things I’d lost. I returned to camp surprised and relieved to dry tears that it remained as vacant as I had left it. Then after checking the perimeter and collecting what rainwater I could to continue the process, I made my way inside the trailer and locked myself away a second time and attempted to wait out the storm.