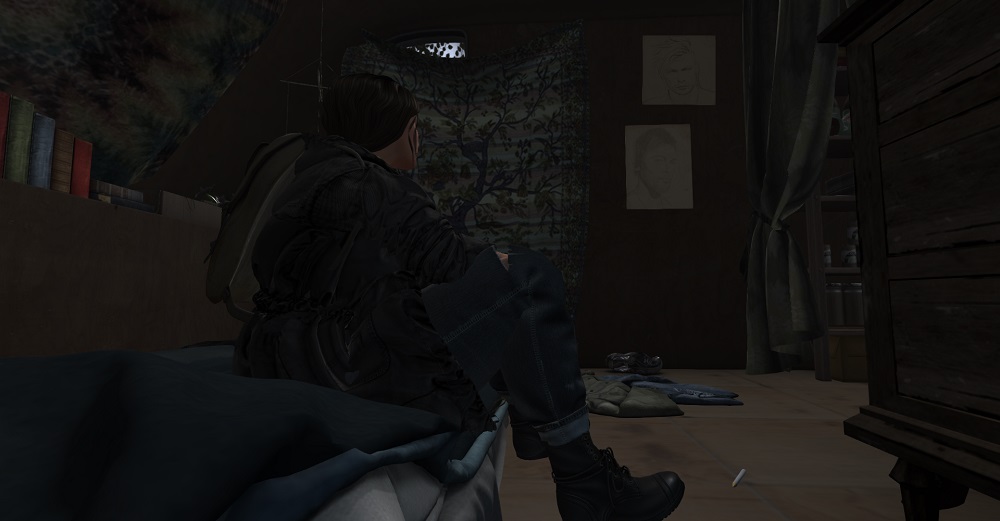 Have you ever had one of those days where you should have just stayed in bed? That describes today perfect. It wasn’t all bad, but the lows were pretty low to overshadow most of all else. It started with work. This woman came in; army helmet, red hair, piercings (why does everyone here seem to have so much metal in their faces? Aren’t they worried about infection from injury or ripping hazard??)… anyway she had with her a bag of stuff to trade. Dry goods and fresh meat. Cue miscommunication. Long story short she wanted to give me half her goods for three hundred. I thought she meant all for three hundred. She got pissed, I tried to compensate, and that only served to piss her off more. I even said to her I was trying to make things right. Her parting words were something along the lines of I would be taken advantage of or shot (with that mentality). She left. I left a while later. I really don’t know if I’m cut out for this job much less this life. Things were so much simpler before all this. Maybe not easier but at least I felt like I belonged somewhere. And human. Not surrounded by so much hardness. How in hell have I made it this far and not become like them/everyone else??

I left work needing to clear my head. I took the hill right from the store and passed a crashed helicopter on the road. I remembered that from when I was first in Arklay. Kane and I. I drank from a well and spotted a dumpster near a broken down car. Trying my luck paid off big time. I found a first aid kit! As I hurriedly shoved that in my backpack I noticed shadows moving on the ground before me. I looked up to see a man standing on a rooftop. He wasn’t suicidal. It was the aptly named Shadow, the man I had met at the bar back on my first day here; aka Mr Moonshine. We talked. We actually joked. It felt good to laugh. But all too soon worked called him on so I left him to his duties and headed back to camp. After the usual rituals I sat a while staring at the radio on my belt, the same one the man with the sledgehammer gave me when I joined AEGIS. I used it to contact Claire and told her I was quitting AEGIS. Quitting? It sounds awful to say but there hasn’t ever really been any feeling of a ‘group’ since I started; only Dom reaching out intermittently and even that was random – inviting me to the bar for “training?” Anyway, they’re nice people in their own right but the job at S Mart feels better suited right now. I’m no soldier. I don’t want to be toughened up or turned into a carbon copy of the rest of the population here. I think moving out of the tent and to the camp probably spelled the beginning of the end for me with the faction but I am still grateful for all they did to get me to this point. I hope there’s no hard feelings. I guess I’ll soon find out one way or the other.

Later, and with the sun finally out, I took a walk again through the ‘Green Zone’ of Arklay. I didn’t know about this before but there’s posters around on walls kind of marking an invisible boundary of sorts where rules are enforced. I’m not sure what that means for the rest of us. The fairground with its rusted rides lured me closer. There’s horses housed there in stables and how they haven’t attracted the walkers or being eaten yet still surprises me, but I stood a while attempting to pet them and comfort them in that low universal tone. I could see the fear in their eyes. The anxiety. At least we humans have words to talk about what’s gone on over the last few years, I hate to think what the animal kingdom in general has suffered in ignorance. The feel of their coats against my hand was comforting. It made me feel better somehow, a little calmer. I walked the grounds and found a concession stand. There were toys scattered to the elements. I gathered a few items and stuffed them in my bag. There were three teddy bears I took back with me; One for each of the little crosses that mark my sleeping angels back at my campsite.

I didn’t go home straight away. Instead I walked to work. I stopped in, checked stock, swept thoroughly, and sat staring off into space a while. Then the rain started to fall. The sky began to get lighter. At the first sign of hunger pains I pulled a can out of my bag and ate it. The dog food went straight through me. Dysentery. That topped off the day perfectly. I left work and hurried to the hospital, even if I have to stop on the way to squat in the woods and use wet leaves for toilet paper. The dead-heads didn’t see me or maybe the stench of shit masked me enough so they didn’t bother to look and shuffled past. At the hospital I handed over my gun at the door and stepped inside. Empty. No body. Just the same as several days before when trying to seek aid post-concussion. I waited but the urge to relieve myself forced me back outside again. Gun in hand I hurried back through the woods to the campsite. I locked the gates, took the hand-trowel and let rip in the bushes. At least here I had toilet paper at hand even if supplies of that are running low. When able I cleaned up and climbed inside the trailer where I rummaged around inside the medicine kit. Prescription pills, would they work? I was desperate enough to find out. I took them, chased down water, and retreated to the back to flop down on the mattress. The world started spinning. I closed my eyes. I don’t know if I’ll wake up in a pool of my own waste tomorrow but for now I feel happy. Buzzed. And wasted. And shitty. Perfect metaphor to wrap up the day really.