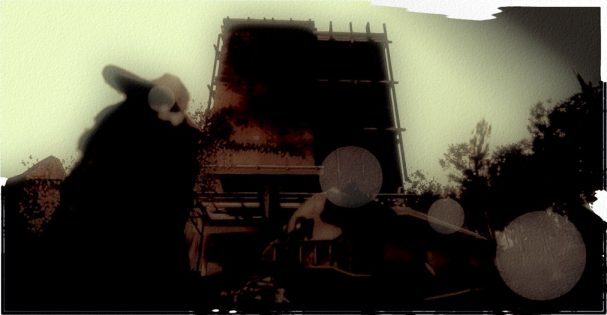 [[All entries are assumed to be written in Russian. For the sake of this Journal the entries are translated into English so the players can follow the story as it progresses.]]

I purposely took some time off from this thing, to think, and deal with a few situations. Lost some workers, gain some friends. That’s nothing new, that’s life. This arm isn’t bothering me anymore, feels good that I can actually move it. Push-ups are still a bit painful, but can’t just let the arm get weak. Beyond that, did some work on the Events that are being planned for the next week. Getting a few things settled, and made sure that the workers understood what was happening as far as that event goes. That wasn’t the highlight of these last few days though. Oh, no.. The highlight came when I got a note saying that I needed to meet three people in particular at the old water facility. Yes. Just going to summarize this as it boiled down to a few things.

I took Jade with me when I went, had her watch the streets while the meeting was taking place. When I walked in, only two of the three people I was to meet were there. Baymo, just the woman I was looking for… and Dale.. Only met her once, but I know exactly who she is. Marcus.. apparently had other things to do. So, getting to business, they immediately demanded to know what my intentions were, wanted to get things straight about why I shot Marcus (go figure), and claimed to not want trouble. This was the funny part.. not wanting trouble. I gave them the same answer I gave everyone else that asked me about that damn fight with him. He shot me, I shot him. It was as simple as that. Can tell the woman, Dale, wasn’t having it. My intentions.. I suppose there’s some secret plot I’m working on to take over this city, that even I don’t know I’m planning. Apparently its hard to believe that I just want to live in peace and provide for my family, like I always have. Have enough trouble dealing with the damn rot-heads, but protecting what little I do have, seems to be a higher priority these days. Apparently this is a foreign concept.

So, after that, Baymo freely admitted that she sent Rudolf to the Dollhouse, but claimed he was acting on his own.. She also told me that he was alive. That complicated things. Basically she didn’t want to take any responsibility for any of her workers actions, but she demanded that I take responsibility for my customers reselling her product on the streets after I sold it to them? Again, something that we will always disagree with. Sure she may not have told him to kill Chaz, but he did. She doesn’t want to be held responsible for the actions of her employees.. and that particular employee is still in her employ. This is always going to present a problem. Along came the threats afterwards. From their posture, and their stance on this matter, despite me asking them for a solution, all they had to offer me was, “Drop it and lets talk business..” Basically she wanted to be pardoned for that. They wanted me to just forget that one of my guys was killed, and for the second time since I got here, I’ve been shot? Sure, just forget it because they said so.

Did Dale, just forget that I shot Marcus? No. Apparently the entire city conveniently forgot that he shot me, and forced my hand to fire back. They conveniently forgot that I asked him to put the weapon down before he pulled the trigger. They forgot that the situation ran deeper than he knew and he didn’t care to hear the whole story. No. They didn’t forget that I shot him, otherwise it wouldn’t have been brought up in the first place. They want me to let this go, but they are not willing to do the same. They tell me that Rudolf fucked me up good, yet here I stand before them, while he’s in a coma somewhere. They think I’m running around trying to prove to them that I’m the big dog, or my proverbial dick is bigger that theirs. They apparently still think we’re living in the world before the outbreak where shit like that actually mattered. Even now, its all  jungle. There are no fancy lights, no loud noises of machines, no masks to wear.. The world has gone to shit, and now everyone can see what the game is about:  Predators and Prey. Survival. They always said that when the chips are down, and the world has gone to shit, “civilized” people, will eat each other. This city is the epitome of that statement.

They claimed that I was the one starting a war that no one wanted. They had a strange way of showing that. I did not threaten them with an imaginary army. I did not ask them about how many people they had to protect them. I did not walk into their businesses and shoot their people. Since I came here, I’ve been keeping to myself, dealing with my family. Since I took over the Dollhouse, I’ve been keeping to myself, not bothering anyone. When I am in open territory, I bother no one. When someone bothers me or my family, I ask them to stop. If they do not, I destroy them. That was the case with Amber, that was the case with Marcus. A war that they don’t want? Don’t make me laugh. They wanted this. The moment they sent Rudolf over, knowing how extreme that man was, they asked for what’s coming. The moment they threatened me with their armies of friends, they asked for this.

First rule when dealing with the devil… Don’t.