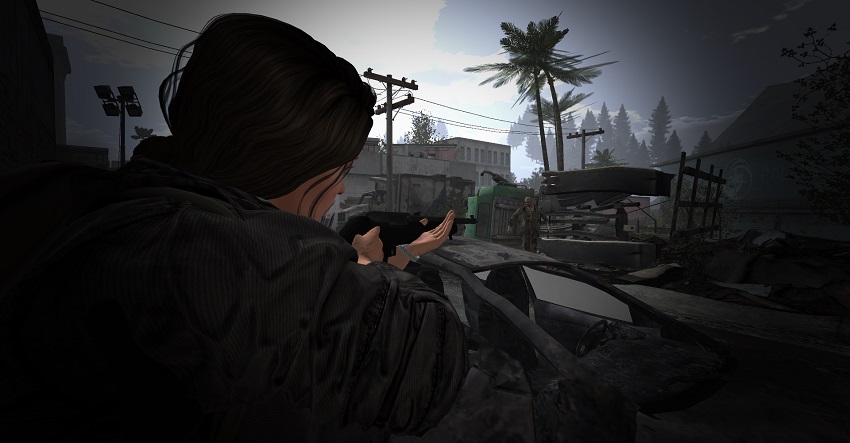 Went hunting yesterday. Went hunting today. Was still too wound up from the mainland run yesterday (feels longer already) to sleep so I grabbed my rifle and headed out into the rain to try my luck. Heard a lot of gunshots, even what sounded like machine gun fire, but luckily none seemed that close to be a direct threat. Hard to tell with the rain coming down. Jesus, talk about being hyper-alert. When it seemed clear enough to move (and my limbs were stiff from the cold and needed blood flow) I moved back out into the open. It’s a fine line we walk (those of us who cover up); trying to stay out of the cross-hairs of the dead and stay visible enough to the living to not take a stray accidental bullet to the brain, all in the name of trying to survive. And eat. And not get eaten. And there’s so many desperate, twitchy, and trigger-happy people out there… Make me think my days, all our days really, are already numbered. Probably are.

No luck on the hunting front. Or scavenging. Dug through the trash twice and predictably came up empty handed yet again both times. Its almost becoming a ritual of late and one that begs the question why I keep bothering when each time robs me more energy and gives nothing in return. Being hungry, wet and cold are good motivators if nothing else. And it passes the time. Like work should. I didn’t go to the S Mart today and I should have. I need to. After the long work week last week and minimal pay I’m wondering why bother. At this rate I will be paying Dale for the privilege of sweeping the S Mart floor. Depressing thought. But there’s more to it than that.

I’m feeling resigned. Not in the way I want to suck the barrel of the rifle (yet) but it’s like – fear. The more people I meet the more I worry they won’t be here tomorrow. And I don’t know how much longer I can keep pulling the trigger on the dead to put out of their misery while mine continues. There doesn’t seem an end in sight. Its repetitive. Everyday in Arklay is groundhog day. And lately with every rustling sound or moan in the woods my heart is in my throat. I don’t know where this fear has sprung from, or maybe I’ve always had it since this thing started and it’s just come to the surface more now, but I expect the next dead face to come for me to be Kane, or Doc, or Lola. And for a flash or an instant it is. It’s like the next corpse could be Dom. Or Dale. Or Kate. Or Claire. Or Ame. Or that nurse with the really long hair. Or that guy with the dog. It makes me feel sick. It’s one thing to shoot strangers, or people I never knew before the outbreak claimed them, but having to shoot someone I used to know or even care for or love? Especially when it just cements the fact I will likely die alone here. Neither of us dead or really alive. That’s the epitome of hell on earth, isn’t it?

At least I ended the suffering of two others today (dead, not living) – and none I used to know. The first was quick and stumbled into the woods, but the groaning of the second a few hours later alerted me so I had time to seek shelter before it could attack. Though I didn’t hide. Not like I used to. I was able to take my time and line the shot up right, leaning across the roof of a wrecked and burned out car in town. Crazy that these things are easier to kill than a rabbit or deer that seem to keep eluding me. But that’s not exactly right. It’s still not easy to kill even if at the time there’s a moment, a thrill almost, before reality dawns of what I’ve had to do. What I’m doing. I still run and hide if there’s too many, and lately there seems to be a lot more dead in town or feels that way anyway with two or three popping up at a time. It’s like they’re roaming in packs. Did the mainland run open a channel somehow to let more in or are they just getting more desperate? Is their food source (us) getting so low out there beyond Arklay’s borders that they’re forced to cross the water? That’s a horrifying thought. Especially considering since they don’t need air to breathe they can’t drown and if the current is slow enough to not be swept away. And there’s water pretty much all around us…

Whatever happened to that radio transmission? The one saying that the soldiers had a cure? Why isn’t the news all over Aklay on some kind of loud-speaker or something? On posters maybe? I don’t know. I kind of expected a yell of triumph or relief to sweep through town but people seem to be keeping whatever feelings they have about it to themselves. Surely injecting some hope in this saturated place would be a good thing, or is everyone so used to being disappointed they’re not willing to get their hopes up one more time?

I took another walk through town. One more scavenge. Earned a can of cat food for my troubles. Little to cheer about. And it’s started raining again. At least the rotting smell that hung rich in the air with the wet yesterday has gone. It’s cold though. Chilly. I wonder if it snows here? Probably not but who knows what the weather will do anymore. I hope I live long enough to find out. At least today wasn’t a total write off; In all, two dead-heads dispatched. A mole, a goat, a chicken, and a raccoon got away to live another day. Tomorrow I’ll try again. It’s all I can do really, keep taking this one day at a time and hope persistence pays off.