I found this notebook on the side of the road. Might as well use it for something. One day I won’t be here, maybe my experiences will help someone like me.

It’s been a whole day since I have arrived in this town on Arklay Island. Everyone seems to have been able to make a life here. I walked around for hours, looking at help wanted signs. Every place I came across was either some sort of prostitution place…yea I said it. I don’t look down on those that do it, but it ain’t for me. They can even dress up the word and call it ‘escorting’ but lets be honest…they’re having sex for money.

Finally I came across this little garage with some boy on the roof. Well go figure it was the owner of this place Dane. I asked him how he got on the roof and he pointed to the large fuel tank by the place. That thing looked unstable as hell, but it works I guess. I told him I was looking for a job and I love machines. I can work with them, it’s like they speak to me. When you have a talent like that, you use it in times like these. 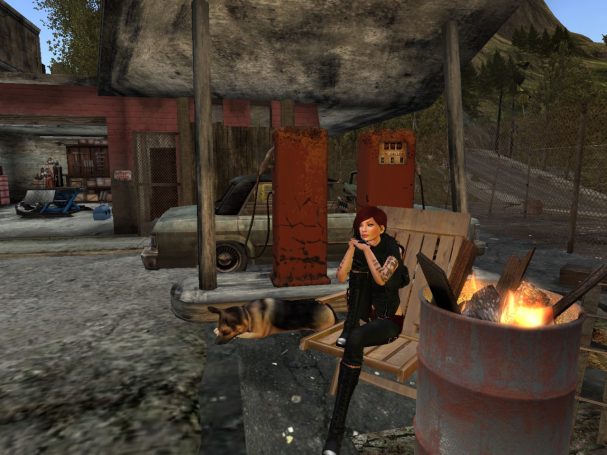 I got hired right then on the spot. Then right after some girl came in wanting to sell him some fuel. I offered to help, didn’t mean to offend her, but she is small. She didn’t want my help so I figured it was just best to back away. Dane offered her $400 and she wanted $450. I like picking a little on cute-things, yea I’m a bisexual, what’s it to ya? So I joked that it looked a little light on the top. Like it had some air. I don’t think either of them appreciated that much, but hell got to have some humor in the end times.

Not much to really say about Dane and I. I tried to organize his wrenches and he sounded like he wasn’t too happy about that, I still did it later, but I won’t tell him that. He’s a good guy, gave me a little to eat when he noticed me staring at that hunk of meat over the fire.

Finally, I made my way out to scavenge a bit. Found some shotgun shells, and a little bit of money. I still don’t have a gun, but I’ll hold onto these when I get one. I went by the hospital and met a sweet little nurse with a southern accent – what was her name again? Oh right, Pacey. If I ever die and you find this and meet Pacey she likes to hug. Just bare with it, give her a small pat on the back and ask to see where the shelter is.

I haven’t slept on a bed in months. That day I got to see one, sit on it. Feel the scratchy sheets, and the firm pillow. It’s the best thing I have experienced since well, since this whole fucked up outbreak happened.

Rest shouldn’t be taken for granted, so I sat for a bit then headed back out. It looked like Pacey was heading out as well, because when I came back down she was out of her scrubs and heading out. I was making my way back towards the garage when I saw a freaking rotter. Fortunately, it didn’t see me and I got away. I took a different route to the garage. That’s where I met Lark and Brayden.

Now here is the thing about Lark. She has been working there for a lot longer than we have, but I don’t think she understands the advantages of organization. If you can find a tool without having to look through a pile of tools, it cuts your work time by a lot. Lark is a firecracker, and her and Brayden were in a huge argument about where the tires and the gas cans should go. Now I came in like, in the middle of everything, and I am sure Brayden said something about Larks over-sized overalls, and Lark said something about him being shirtless. Honestly, I don’t care what you wear as long as you are dangling your private parts everywhere.

Lark stormed out after I tried to tell her that organization is good. Then Brayden and I talked. I though I told him my name, but I guess he must not of heard me. He threatened to call me tiny tot, and I threatened to hit him in his tiny tots if he called me that. I think a friendship has been made between us though, because soon after introducing ourselves a man came to the garage.

This man was Ben, red scruffy face hair, and apparently runs the shelter. By the way Ben, thanks for the shelter…it’s going to be my home for a long time. He came to ask the garage for some help in the Fringe. Now, Dane had warned me earlier about staying away from there, so I was nervous. I had to stay back to gather myself before continuing out there. I also borrowed some tools from the garage, yes I returned them, but it was a job so I took some tools.

When I got out there Ben was showing Brayden what he wants done. He wants a fence fixed and a generator hooked up. Brayden has no idea how to do the generator, but I do. I have never felt so alive than I did in that moment. It took a while to hook up the transfer switch to the generator, then hook a hose to the exhaust pipe and taping it with duct-tape to create a seal. I had to knock a hole in a door and put the hose through it so that the house wouldn’t be a death trap. Ever suffocated before? It’s not fun for the parties involved.

After that I went home. Ben paid me a good chunk – I won’t say, but I ain’t complaining. Saving up for a gun.

Well that’s it for my first day in this little town. Some advice, if you find a good place…settle down, but always be prepared to be on the move again. Don’t get too comfy.