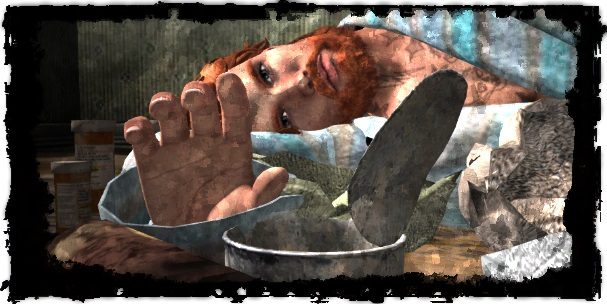 They say the hardest part of moving on is leaving pieces of yourself behind. That’s pretty much the case here lately. I’m leaving a lot behind. Moved out of that trailer I been working so hard on to greener, better pastures. It’s just a place down the road, it ain’t far, but it’s something new to me. Managed to take everything I own with me. Couldn’t take the memories though.

Sometimes, when I was there, I’d stay up late thinking maybe he’d turn up. Sitting in my chair, smoking a lot of cigarettes, watching the door. Sometimes, I’d even peek out the windows hoping he’d show up just then. Don’t know if he’s hurt somewhere, dead, or moved on. Don’t know where he went off to. Didn’t even say a word, no note or nothing. Been sort of making my peace that he ain’t ever coming back. He still could, but he might not. Probably won’t. Rough world out there. Takes anyone at a moment.

Don’t know how I feel about it all. Kind of a mixed bag of emotions flipping back and forth. Thinking too hard on it just makes depressed. Sad. Gets me all shook and feeling sick. Hurts. Physically hurts sometimes. Been trying to tame down my mood with shine, weed, and pills but they don’t really work. Still think the things I do, but they kind of make me feel less like it matters. I’m just burying it all, I know I am. Maybe though, I keep pushing everything down, it’ll all go into a pit deep enough where it don’t matter no more. That’s what I tell myself. It’s comforting, but I’ve a feeling it likely won’t work.

Don’t know what’s worse: the feeling of abandonment or just loss? Hard to know either way not knowing what became of him, if he’s dead. Where he is and not coming back, if still alive. Thinking about if he just left makes me so angry. But, I don’t want to feel that way though.

He was some sort of a companion of mine. I miss that. Miss that most of all. We were close, I guess you could say. It was something. Never really thought to put a label on it. Never really talked about it with him or other folks. Was working myself to say something, anything. Just to say what I been thinking about. Opportunity missed. It is what it was. Whatever it was.

This ain’t the first time I’ve had to deal with this though. First time in Arklay though. I mean, along the way there was others I’d felt the same about. Ruth and Gladys. Rosemary long before the world ended. And Irving here and there when our paths crossed. Dakota was something different. There wasn’t really an end. Just gone.

So, moving on with moving out. New place is a house, a real actual house! Been so long since I actually settled down in one of these. Not since I was a kid, really. Was just junk trailers and truck cabins for a good long time. Now, I’ve actually a decent piece of land to own. Feels good. Feels rewarding to be here. And also kind of lonely, but I’m not going to focus on that.

Lots of work though making this house into something. Whole lot to do. Fences are in bad shape. Windows need boarded up. Electricity was out. Started making my way through it though. Cleaned up the place. Put everything of mine and what was left by the previous owner in order. Hired couple of garage workers, Brayden and Brooke. They helped get things running.

Brayden’s kind of a guy good with his hands I guess. Took to working the fence right away. Got a bit patched up. Brooke, she’s the brains it seems. Rigged that generator of mine up and running. Ran a house from it, out through the garage door, to carry out the fumes. It’s a start.

During this whole operation, we was interrupted. First, by some chick I ain’t never seen before. She just up and walked in as construction going on. Didn’t notice her, as I was inside at the time. Brayden’s the one that pointed her out. Looked like she been walking for awhile. Handed her one of the Shelter Welcome Packages. Gave one to Brooke too, on account she’s new. Need to remember to file the paperwork for that.

But wait, there’s more! Guess who else showed up at my door! Ein. Weird timing. Shows up right when I’m in the middle of something it seems. So, that was a nice casual visit. Talked about San Mora a bit and them weird broadcasts. Some folks is heading out there to investigate. Not me, not in the first round anyway. I’ll wait to some others to head off first, before I follow. If I don’t make it back though, Ein gets the house. He asked. I’m making this official.

To whoever finds this journal of mine, let it be known that I, Benjamin Weber, do leave all my property to Ein down at the Eight’s.

Was earlier today actually, that I went out on a run. Was Dale, Al, Shadow, and Marcus with me. Hot spot was a bunch of trailers. Actually, not our intended location, but the van broke down there. Made the best of it though. Found some food, found some drugs. Marcus got a new car out of it. Biggest prize of all though was the hovercraft! Calling it “The Motherfucker.” Thing might of been parked across the river from us the whole time. Not sure how anyone ever missed it. We took that thing back to Arklay. Left the van behind. I’m sure someone will head back for it eventually.

I’ve just got to look forward, like what I tell everyone else to do. Need to take my own advice I give to folks. The here and now is what’s important. Need to focus on number one. When everyone else leaves, it’s only you that’s still there in the end.