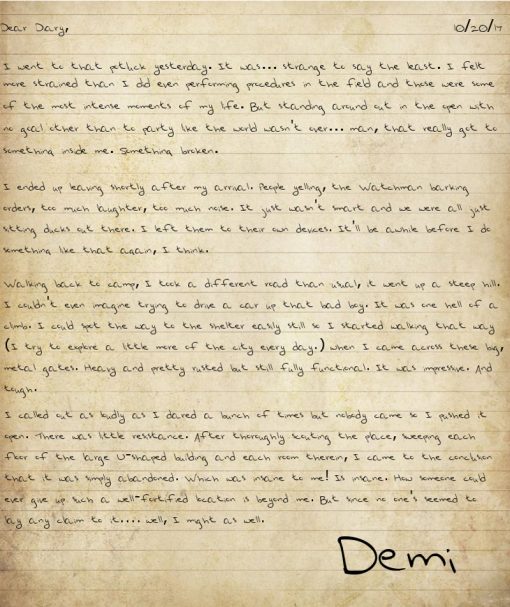 I went to that potluck yesterday. It was… strange to say the least. I felt more strained than I did even performing procedures in the field and those were some of the most intense moments of my life. But standing around out in the open with no goal other than to party like the world wasn’t over… man, that really got to something inside me. Something broken.

I ended up leaving shortly after my arrival. People yelling, the Watchman barking orders, too much laughter, too much noise. It just wasn’t smart and we were all just sitting ducks out there. I left them to their own devices. It’ll be awhile before I do something like that again, I think.

Walking back to camp, I took a different road than usual, it went up a steep hill. I couldn’t even imagine trying to drive a car up that bad boy. It was one hell of a climb. I could spot the way to the shelter easily still so I started walking that way (I try to explore a little more of the city every day.) when I came across these big, metal gates. Heavy and pretty rusted but still fully functional. It was impressive. And tough.

I called out as loudly as I dared a bunch of times but nobody came so I pushed it open. There was little resistance. After thoroughly scouting the place, sweeping each floor of the large U-shaped building and each room therein, I came to the conclusion that it was simply abandoned. Which was insane to me! Is insane. How someone could ever give up such a well-fortified location is beyond me. But since no one’s seemed to lay any claim to it…. well, I might as well.