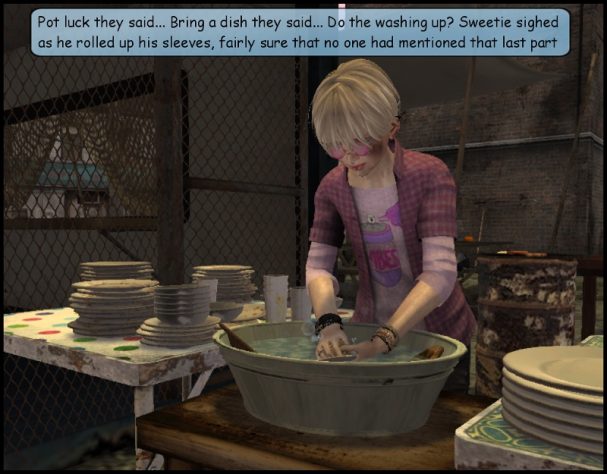 So I turned up for my shift at the caff and OMG! It was like a bomb had hit the place! Total mess everywhere! No one around, obviously. Just loads and loads and loads of clearing up to do after that pot luck thing, obviously. And I totally mean loads. Can’t help but think someone’s kinda taking the piss here. But as I was clearing up I did find some chocolate and an energy drink, and that’s totally finders keepers, so I guess I should be kinda glad about that, but still… seriously! Took me fucking ages to clear up that mess! And it was raining.

You’d think someone form the pub might’ve been there to help, but no, guess that’s like just way too much to ask. But that place has been pretty much dead as far as I can tell which is a bummer coz I could seriously do with a shiny chaser round about now. Luckily I managed to get my hands on a stash of water yesterday coz I soo don’t wanna do those wells, not after what happened before coz then I was like literally up shit creek without a paddle.

Meanwhile, on top of all that, it’s not like there isn’t still all the usual stuff to do. There’s the goats and chickens that need looking after, there’s food that needs to be prepped, fridge needs to be cleaned, floor needs to swept, wood needs to be gathered, water needs to be collected… It’s like there’s a list that’s as long as my arm or something.

And now, to top it all, there’s like pumpkins everywhere! I mean I get how Halloween’s like just about the most important religious thing like ever for Americans, but it seriously looks like we’re gonna be doing pumpkins for breakfast lunch and dinner for the foreseeable. How many pumpkin recipes are there anyways?