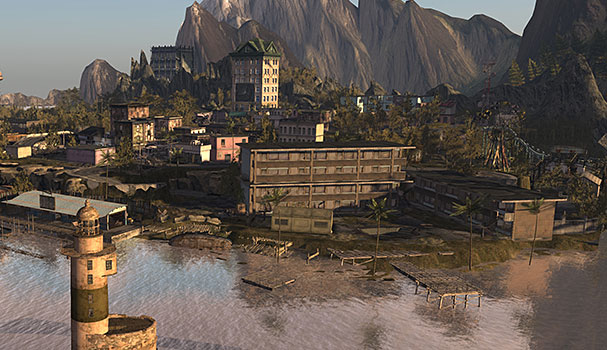 Arklay Island was once a tourist haven in the late fifties. Just off the coast of California, the town’s economy thrived with one of the first amusement parks opened in the state. However, as time passed, so did the public’s interest in the island as larger amusement parks and resorts were built on the mainland – by the seventies, it had been nearly abandoned.

As decades passed, the land slowly reclaimed the old town as it laid empty… until the Outbreak.

Today, the island has become home to various bands of survivors. Often grouped as a business or faction, each band provides an important function or trade on the island – canned goods, bullets, to even cash remains the common currency. These groups also conduct supply runs, grow food, or provide services that creates a semblance of civilization and continues to lure more survivors as days pass by.

The island is also split into two distinguishable zones – the Protected and the Fringe. The Protected zone is largely the center of the island where business owners formed a council and outlined laws. Protected by the Keepers, a band loosely considered as law enforcement, this area is a central hub for trading of basic necessity goods.

The Fringe covers everything else. Outside the reach of the Keepers and laws, there are factions and businesses that thrive in the chaos and desperation that followed the Outbreak…