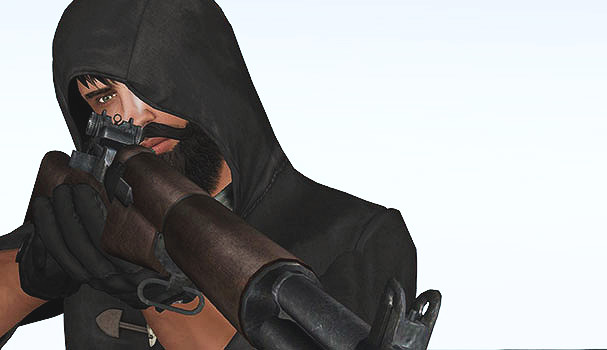 Outbreak provides a set of firearms that must be acquired through scavenging or trade. These scripted weapons work with the ammo accounted for in your backpack (HUD) and is used in features like hunting animals, dispatching the Infected, and player-vs-player combat.

The following categories have several firearm models available through trade and scavenging:

The use of explosives and other gun types requires admin approval. It is acceptable to attach unofficial versions of firearms you have acquired in Outbreak; just attach the official version and holster it to hide it (it will remain active).

There are several ways for your character to get their hands on firearms and ammo:

Leads of factions and businesses that are assigned to a firearm category may purchase crates of those munitions. The supply trucks located at the top of the mountain offers bulk quantities and groups are encouraged to resell individual weapons for profit through role-play.

Combat with firearms requires a series of posts (4-5 individual posts) that methodologically outlines actions leading up to firing the weapon.

The following actions requires an individual post and may be used as an outline for posting the firing of a weapon:

/me could see from the window the masked man approaching the bar from the window, his eyes narrowing on every step closer the bandit made. “Fuck it..” No way was he going to get robbed today. With that, the man approached the bar’s exit, a hand going for the sidearm that was tucked out of sight into the waistband of his jeans. A moment later that handgun was pulled as he shouldered the door frame for support. “This ain’t happening today…” His arms extended to aim at the bandit’s figure in the distance.

/me quickly positioned his sidearm in front of him; knowing it was already loaded, he motioned his finger across the safety, flipping it. With his gun withdrawn, he creeped forward, using the metal fencing for cover when he could.

/me knew that there was no chance of backing away now, sure he could try to run, but there was no way of exiting without being seen. When the bandit emerged from fencing he moved into the doorway for a better shot, a finger curling around the trigger as he aimed at the other man’s chest.