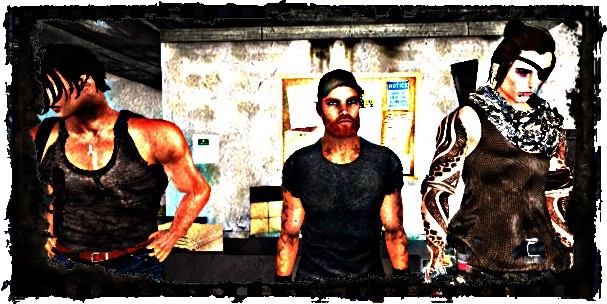 Well, it’s been some time since I made an update. Lots has happened, few things have changed. Where do I even begin with it all?

Well, let me see. Shelter’s been a little busy as of late. Folks come in, folks go out. Donations have been coming in strong though. Got some from the garage of all places. Folks were surprised to hear that. Little bit more came from personal donations of others. All together, at last count, we got 28 completed welcome packages. That’s just matching up food to drinks. Got some drinks left over, quite a few. Didn’t count those. There’s some candy bars I didn’t pack away. They aren’t that great to feed folks. Them’s emergency rations for the shelter now.

We had a bit of trouble between Vince and May. Vince works the generator here and May’s from the garage. There’s some kind of feud between them about who’s responsible for the machine. There were some heated moments first, then some blows. I was working on cooking up some rat as this was all going on behind me. When things peaked, that’s when I scraped the pan with a fork to get their attention.

What they was arguing about pretty much comes to who has a bigger dick. I don’t really care who does. Vince ain’t the lead of the shelter nor hospital, so any sort of deals with the garage comes from Kay. There’s no notice on such, so until then, whatever she wants done has to come directly from her mouth. May, meanwhile, can choose to help out the shelter or not. It don’t matter. It’s completely up to her. Told her though, that the folks who are hurt, hungry, thirsty, and in need of a place to sleep will be more thankful for her contributions than any one of us here.

Saying that, the two kind of opened up to one another. They settled their differences, sort of. It still lead to May crying though. She wasn’t upset about the argument no more, but that she drew blood from Vince. They both seemed pretty apologetic to one another for what transpired. Things worked out for them in the end. They’s gonna do right for the shelter by however way they want to.

Since Sea stepped down, we ain’t had nobody leading the shelter. Not sure we really need one at this point, since the lot of us work well on our own. I’ve considered it though. The pay raise would be nice. I’ve put in enough hours to at least look active enough. Maybe, maybe I’ll do it. Have to think a little bit harder on it.

Could I handle the responsibilities? Maybe. Probably. Ain’t too sure. What would be different? Guess I’d make doubly sure folks got baskets to hand out. That ain’t a problem right now though. Maybe I’d poke around in places to start donation drives. That could be something. What would I change though? Anything? Things were running pretty fine as it is.

Hadn’t seen Sea nor Vince really check into the shelter much. Pretty sure they’s around though. I’ve just been seeing them a little less often. Actually, ain’t seen to many hospital workers either now that I think about it. Other than the occasional fresh meat, them’s the new arrivals, place had been pretty lonely.

We did get one new worker though: Dakota. Over the course of several days, Dakota’s made himself quite the asset around here. Scavenging, hunting, helping folks. His hours pretty much rival mine; and mind you, I’ve put in quite a lot of time to this place. Without Sea around, it’s just been us workers three.

Dakota’s served a good purpose filling in the gaps where Sea and Vince ain’t around. We been a pair, let me tell you. Been showing him how to hunt, scavenge, drink shine, and smoke weed. He don’t do too well getting fucked up. Gotta watch him on that. I invited him to stay with me for awhile, at least he found his own place. Living where you work’s bound to drive folks crazy.

Home’s been coming along. Dakota’s been a big help in that. We made some pulls, defended the place together. Raided a couple abandoned houses. One them houses had some dead still in it, and that was a trip. Wasn’t a tough fight we had there, but was tricky. Got some good stuff out of it.

Got something I could call a living room now. Looks pretty nice. That’s been Dakota’s corner. Up ’til recently, I drew lines he couldn’t cross. There were places I’d bar him access from. Time’s passed though, and I learned to trust him enough to wipe out them borders.

The shared spaces we had is coming along well. Kitchen’s decent. At least we got some space to put things. Got some dishes too. It’s made things real nice not to eat directly out of a can. With that hot plate I bought awhile back, it’s like we’re eating real meals again.

Bathroom’s a little more put together now too. Got some towels. Found a medkit and some prescription pills, so they’s in there now. Even got some art on bathroom rules in there too to spruce up the place. Been refilling a water jug with river water; good enough for cleaning, but not for drinking. Maybe, if we get lucky, I’ll find a small tub that will make some quick scrub downs possible. Won’t be as good as a bath, but at least we’d be cleaner. Need lots more water for that though. Gonna talk to Dixon’s about helping to collect rain water.

Hygiene’s pretty important these days. Infection sets in pretty fast. With all the pulls I been making from garbage, gotta keep doubly safe. And then there’s the hunting. It ain’t unusual for me to just be covered head to toe in filth and blood these days. At least that’s making me look like I’m making an honest living. Folks who’s too clean, likely ain’t doing any work.

So, that in mind, I need to rig up some kind of way to wash clothes. All I’d need is a line and another bucket. Could pull water from that thought up rain collecting system. Fortunately, that can wait a bit. Dakota and I scavenged up some clothes recently. Looked to have been some kind of a Red Cross pacakge. Let me tell you, feels a lot better not to switch between a couple shirts and pants all week.

So, yeah. Things is looking up domestically. Trailer’s more of a home than it once was. Food and water though’s still a problem. And I’m still pretty poor as it is, especially after buying a shotgun. Love that shotgun, it’s my baby now. Some point, I need to return Vince’s handgun to him.

There ain’t too many goals left, other than getting a few last things for home and sustaining myself. Looking at the endgame though, that’d be racking up weapons. I want an armory. Buy one of every weapon if I could, and the bullets to match. Kinda need it with how active the dead been lately. They ain’t coming just one or two anymore, but parties. Hordes! Crazy how their numbers popped up.

And then there’s the threat of raiders. Since I been fixing up my place, it’s drawn some unwanted attention. Fortunately enough, it’s just been folks curious about the place. Some were looking to trade, like Boots. Others came looking for shelter like May, Lettie, and Audra. We been lucky for now, but when’s that gonna run out?

That trailer’s my kingdom, so I’ve been calling it. It’s where I keep my stuff, it’s the place I protect, and it’s where guests is received. The Kingdom of Benzonia, it is. We’re a totalitarian democratic society run by the President King-that’d be me. Dakota’s my loyal first knight. There’s only a few rules folks that live there and visit have: don’t advertise where we live, keep the noise down, guests may be invited over, don’t enter my bedroom, protect the place but if you run then you’s gone. . These are the rules today, but they may change at any time. They are for our own safety, your education, and sometimes maybe even for my own entertainment. That is the price to pay for living in the kingdom of Benzonia.