Technically my thigh, but that doesn’t rhyme. Plus, years of action flicks have taught me that dude was probably trying to cap me. I’m stuck in a hospital bored stiff, so I guess I’ll write more of my thoughts.

Writing that out actually made me feel a little better. Maybe you ARE on to something, Prof. I guess I should cry to this book more often. I only have so much paper though, so I don’t want this becoming my own little post-apoc Twitter.

“Today, there was a worm in an apple I found in a dumpster! #bonus”

I doubt the cyborg archaeologist that finds this book wants to read about my mundane crap anyway, so I’ll try to keep my scribblings to a minimum. Only when I’m about to burst. Like now.

Using my mystic powers of social networking, I found out where that mall was. I decided that instead of following others, I’d get a jump and head there early myself. Because first dibs are best dibs. Turns out I wasn’t the first. The place was pretty picked over when I arrived. Wasn’t all bad though. Found some much needed warmer clothing, an empty water bottle, scatterings of food (Yay!) a brush, (#GoodbyeBedHead) and an urn. A fucking urn! Which means it probably has a dead guy in it. Sweet. Then, I found a General Good store in the back of the mall…

I thought it was my lucky break. Finding a General Goods store these days is like, discovering fucking El Dorado! Instead all I found were two inked-out raider-people, who I swore were biters at first. They looked like something right out of an 80’s flick. I wish they had been biters. Not that I have a thing for biters, it’s just that biters are slow, they don’t yell threats at you, try to rob you, or fucking shoot you in the leg!

There were two of them. A girl named Nail I think, and her boyfriend(?). Can’t remember what she called him. I think it was Dorkus? He’s the one who shot me for no reason, so he’s Dorkus now anyway. A lot of this is a blur. I was scared shitless (still am) and I didn’t exactly get a good view of things while I bravely cowered on the floor. There was a lot of shouting and bullets and glass breaking, then silence. I really thought I was dead. Not the first time. …It’s scary that I’m even at the point where I can write that.

Luckily, others arrived before they could finish me off. Claire, the lady from AEGIS blew the heads right off of those two. Like, literally. Got blood and brains all over my clothes! It’s not as hot as it sounds. Another outfit ruined, but better than being killed. It’s funny. Watching heads explode in movies and stuff was pretty awesome. Seeing it happen live right in front of you, not so much. It was fucking horrifying! And the smell! I dry-puked half the night when I got to the hospital.

I think this is the second time Claire’s gotten me out of a jam (to put it lightly) within a week. I should probably get her something for Christmas. Another lady was with her too. I didn’t catch her name, but I think she took a bullet to the leg as well. It must be contagious. I’ll have to thank her too if I see her around. Mark at the hospital treated my leg later. It hurt like hell, but it feels a bit better now. To think that just hours before, I was praising him for being shot in the leg, and look at me now. Fuck you karma.

Now here is the part that really bothers me. Aside from being almost killed that is. Before we left I took Nail’s gun. She’s the one who had me at gunpoint the whole time while her boytoy was busy being a target or whatever. I thought I heard Dorkus yell that he was out of ammo before his brains splattered all over me, so I took Nails. Once I recovered and really went to examine it, I found out it was empty.

I may be wrong, but I don’t think she fired a shot. Which means this whole time she stuck me up with an empty gun. This is what f’s with my brain. Biter are gross and a nuisance, and they smell. But they are just doing what they are programmed to do. Which is bite and slouch around and be smelly.

These raiders though; They also were gross and a nuisance and smelly. But they had a choice in what to do. And yet they were so desperate, one sticks up a stranger  with an empty gun and the other kept fighting even when he probably knew it was a deathwish. How did things get so messed up? I think I’m staring to fear people more than biters.

That’s scary as shit. Especially since I’m currently on an island full of people. AND biters. 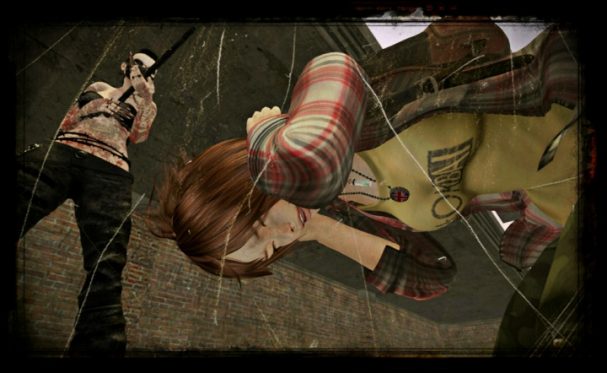 After all that trouble, I left the brush that I found in the mall… #HelloBedHair  – If you could find it in you to retrieve it and bury it next to me, my corpse will be eternally grateful. Assuming I haven’t eaten you already, of course, in which case, my bad.