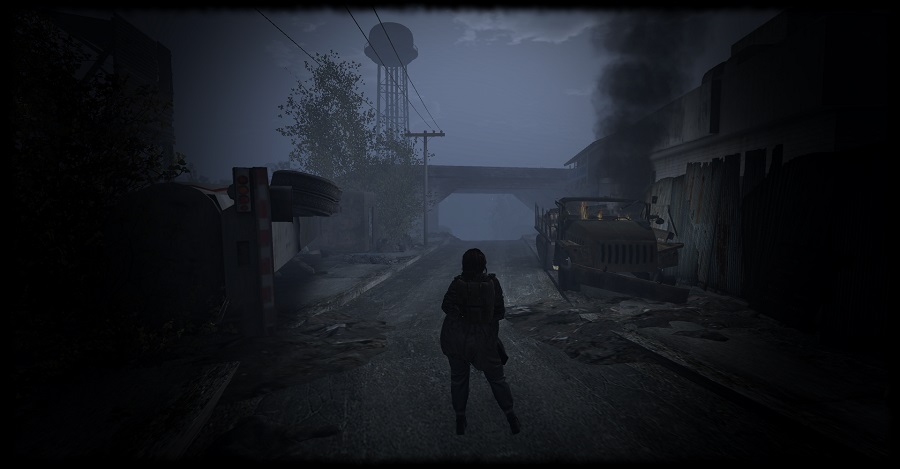 Sickness and exhaustion have taken their toll. It’s been impossible to stay awake much less write the last few days. I haven’t been able to eat or drink much so supplies haven’t been impeded – until now. I woke today with a ravenous hunger. I was starving and dehydrated again but several bottles of water and three meals later I feel something closer to normal. Not normal, but ordinary. The way I was before I fell sick but not before the outbreak – I don’t think there will ever be a normal for a long, long time just yet. At least I was well enough to get up, check the camp, empty and reload my gun again, and trek through the woods towards town. It was the most I had done in days so I took it slow. Thankfully, all was quiet.

Work too has been slow tonight. I swept thoroughly from front to back. The effort was taxing so I sit now writing this entry. Not that there’s much to fill in. The few days struggling through the dysentery has left me feeling a little disoriented again, time wise. It’s hard to believe I was out of it for so long. It’s a miracle in its own right that the camp wasn’t compromised while I lay struggling through fever. No sign of the living or the dead. Still, I don’t want to get complacent. I’ve also learned a valuable lesson in eating pet food or drinking from wells. Thankfully I’m not struggling as much as I was this time last week. I even received my pay check from last week. $480.00! That’s fantastic! I wasn’t sure what to expect but every cent helps, and now hopefully I can afford to buy more food, more clean water, some toilet paper (of course!) and even more bullets if I can afford it. Though after spending those few days sick in the rain I have to be more selective of the days I attempt to hunt. Can’t afford to get sick again. It’s not like life before the outbreak; now a simple cut or cold can be a death sentence if not treated properly. To think of so much we used to take for granted… But now I’m on the up-and-up, and the money will help me from slipping backwards where starvation and lack of shelter were very real threats. Still, I’m not easy-street yet. Far from it. I’m thirstier now post-recovery and need to keep my strengths up which is a whole new battle all in itself.

People are slowly starting to wake now though the sun is a few hours from dawning over Arklay yet. It’s still cool out, which, with so little of us left makes sense – we’re not overheating the planet any more. I still marvel at so many tiny women I see wearing more metal on their faces than clothes on their barely-covered bodies, with styled hair, makeup and smelling of soap and shampoo and perfume of all things! That keeps blowing me away. You can tell those who have some money, or no sense, by the way they present themselves – drinking water means more to me than smelling pretty. Don’t those dead-things smell them? Why even take that chance? And why wear so little and risk even so much as a scratch, for what? I see so much stupidity sometimes I have to laugh. It’s a bitter laugh that so many good, honest, contributing people died so morons could keep breathing. Maybe I’m being too harsh. I get that we’re all coping in our own way but the mother in me wonders over and over why so many people take unnecessary risks when blending in and staying off the deads’ radar has got us all this far? I can’t pretend to care how I look right now, or how I smell, and maybe I never will. Having been on alert for so long I don’t think there will ever be a time or a place I can convince myself that life is actually back to normal- enough to dress in heels again or wear makeup or get a bright rinse put through my hair anyway. My priority is literal survival, not looking bad-ass. The dead don’t care what we look like; we’re all walking take-out to them. Anyone impressed by a flower-scented beauty in minimal clothes deserves to be eaten. Even when Kane or Doc were with me I never revealed unnecessary skin. We were always covered head to foot, even in the hottest heat and worst humidity. Of course there were times we would strip down and make love but even then I can barely remember a time we were ever fully naked. We all have urges but so do the things out there willing to eat us. Without them I’ve had to grow up fast. I don’t know if it’s made me colder but I am more wary than I ever was before, and I didn’t think that was even possible. It’s hard to remember all the things they tried to teach me, especially with my groggy post-feverish brain. At least for now it’s not raining, so that’s something…

Scavenged twice. Came up empty-handed both times. Maybe I’ve filled my quota of luck just getting through the sickness.

Just now I heard footsteps pass, and I watched a man in a fine cut suit digging around in the trash cans outside Sam N Ella’s diner. At least he was covered, as sharply-dressed as he was. I guess it just goes to show it doesn’t matter who you are, or who you were, the outbreak has brought us all back down to one level common ground now; dwelling in the gutters. It’s hard to smell like flowers down here. Shit floats by unnoticed. That’s my motto for now. If I don’t stand out on the living’s radar then hopefully I stay off the dead. Either way that means I get to see another day. That’s one more than everyone else I used to know has.