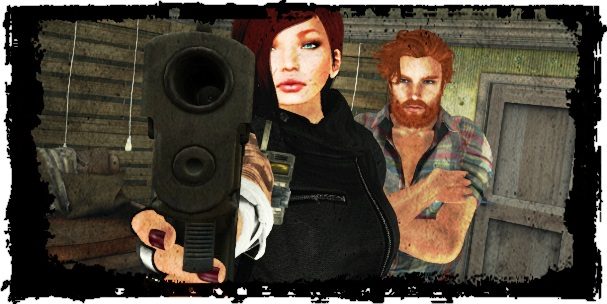 San Mora lies ahead. I’m determined to go, just not in the first wave of everyone else. Few of the others here on the island got this crazy idea to go by raft. I’m not too partial on the idea of coasting on water. Going to head out across the bridge, Dragon’s Maw some folks call it, and see what I can find out there. Track down some sort of direction to San Mora, find some other reliable transpiration. I’m thinking maybe a bus or one of them big rigs like I used to drive back in the day. Something, just anything to bring more folks down in there later.

Spread word around a bit of my intentions. Told them to spread the news that one day soon, I’ll be back, and I’m taking whoever with me to San Mora. Spoke with Pacey, one of our nurses here in the AES; Kaylee, as she was selling me some weed; Casimir and his sister, Natalese; as well as Brooke who’s been calling me a friend as of late. Maybe that’s enough word to get around.

She asked me quite a bit. Where am I from? Nebraska. How old am I? 38. Where’d I work? Truck driver. Family? Probably dead. Kids? None that I know of, but maybe.

To be nice though, I prodded about Brooke’s history as well. Seems like she’s a rich kid from California. Never worked a day in her life. Spoiled brat back in here day. She’s just a kid, even at the age of 19. She’s got her interests and hobbies. Her way with machines makes her rather useful to us in Arklay. She’s got a place here, that’s for sure.

Still, she’s not totally survivor ready. She ain’t sure how to fire a gun. Gave her some lessons on that. Named the parts of my SIG P226 to her, told her what they do. Gave her some brief lessons on how to stand, which way to hold your arms, where hands go on the grip. It was a mess at first! She was up and holding that thing like in the movies: one handed and sideways. That’s a good way to not shoot your target and maybe even hurting yourself. She learned though, pretty quick, and I think she’s got it down. Next step’s actually getting her to shoot something.

Baby steps. We’re taking baby steps. Get her on a handgun first, maybe then a shotgun. I’ve got my old Remington 870 Shorty to teach her with. Not going to lend her my prized Big Pump though. That’s my baby! Just got it the other day from S-Mart. Dale sold it to me and she was all too glad to take up the money. In addition of buying a Ruger 10/22 rifle, I think I’m her favorite customer now. And all it cost was a measly five grand. Drop in the bucket for the cash I’ve still got on hand.

I’ve a full armory now. That should be enough to take on whatever’s going to come at me on the way to San Mora, and even whatever lays within itself. I’d first wanted to go to see if this place got any interesting loot. That’s still number one priority, but I’m hoping that maybe I’ll find something-someone along the way. What’s the chances of running into Dakota out there? One in a million? Shoddy odds, but at least there’s maybe some chance. Don’t expect to find him, but he might be out there. Not going to keep my hopes up for it though.

Everyone’s got something riding on San Mora. The cure, more people, the promise of trade, the fat stash of goods they might got for the taking. I’m a bit skeptical myself that this is some promised land. Nothing here in life post-apocalyptic is as good as it seems. There’s always some sort of catch. Maybe it’ll turn out okay, but I really rather doubt it. Whatever happens, it’s bound to be a life lesson for us all.