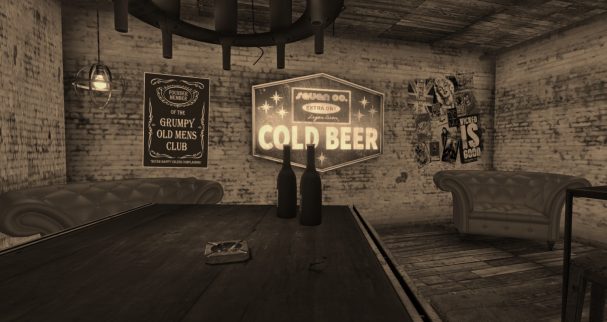 What’s a day any more? They all bleed together. Hell, everything bleeds these days. Been losing a lot of people lately. At least, by lately I mean the last month or two. Whatever rose-tinted glasses I had on when we got to Arklay? Pretty sure they’re cracked now. Guess I thought this was some sorta safe haven, but there’s nothing safe about this place except that we got less deadheads shambling around… least in town limits.

But win some lose some I guess. At least my brother’s alright, and I’ve got Israyhl. Without the two of them? Yeah, not sure what I’d do, especially Isra. He’s the rock I never knew I needed in this madness.

Speaking of losing some, Marcus took a step back from life in the green zone. He didn’t exactly divulge what he’s off to do. Maybe he just needed some space. Maybe he just needed to cut ties with responsibility for other people for a while. I get that. Having obligations after the world’s gone down the crapper is strange. But, now Coach’s has fallen to me. This place I found myself in again. This bar I’ve come to love and make home? Yeah, now it’s me who’s gotta do right by it.

I don’t know the first thing about how to run a business, all I know is people. I try to make sure everyone who walks through that squeaky ass headache of a front door at least feels welcome. Most nights I feel like I’m failing at the fundamentals. I think it’s just the utter and complete… absence… of life. Where did everyone go? If I were a more paranoid sort I might start to wonder if that big ol’ baddie of a faceless Founder was kidnapping people and stashing them in that thing up on the hill by the lake that seems abandoned. Who the hell knows?

The other night the Howlers had a carnival. Still don’t trust a certain schizo as far as I can throw her, but I thought maybe she was doing a decent thing, putting on some entertainment, catering to people’s humanity again y’know? Wrong. Whole goddamn thing was a ploy. Figures. That group that calls themselves the Howlers are like a buncha teenage thugs wandering around stealing people’s proverbial lunch money. They killed someone to make a statement. Saw a dead body rolling down the hillside with my own eyes, followed by the proclamation that Arklay NEEDS the Howlers.

To make matters worse? There was a Watchman guy there. Huge hulk of a man I’d swear was hyped up on ‘roids who started going nuts when a friend called one of the Howlers out on the facade (pre dead body exposure by-the-by). Eventually heads lead to tails and the real purpose of the carnival was exposed. Bittersweet vindication for having called them out, but that doesn’t fix the fact that someone’s dead and people have been going missing. Kinda hard not to start placing blame.

Truthfully? I’m not afraid of the dead any more. It’s the living I’m starting to watch out for.