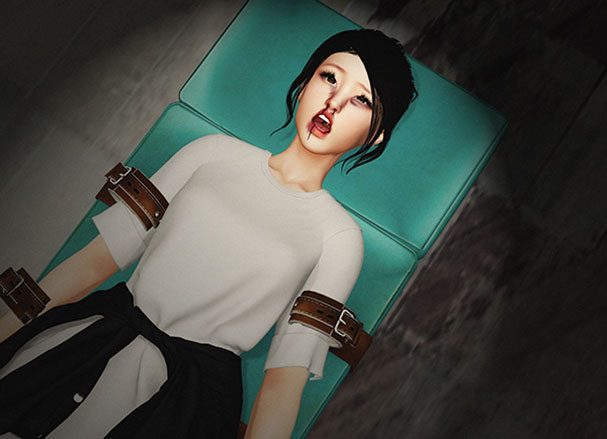 Her head pounded and throbbed like trying to wake up from a bad hangover, but this pain was far more worse and made her entire body ache with irritable chills. It hadn’t even been twenty-fours hours when Riley arrived at the goddamn forsaken island. She had already managed getting into a squabble with a one-eyed limping woman who had forcefully collided her grungy ‘ol stinky shoe into Riley’s face. Riley groaned and grunted as she tried to recollect her memories of that embarrassing fight; a woman and a man arrived onto the scene wearing solider-like protective gear and quickly tried to subdue the rampaging Riley with a quick-swift elbow to the face—breaking Riley’s nose on impact. “Bastards,” she muttered with a raspy voice. “All of ‘em! I’ll kill ‘em!” her teeth grinding as she began to awaken. There was a bright light overhead that felt warm against her bruised-up face. She tried to lift her arms, but found they were immobile. “What…?” she exhaled a breath as she quickly looked down to her hands to see her wrists and upper arms fully restrained with leather straps. She jostled herself as she tried to escape the restraints. She lay her head back on the uncomfortable surgical table and looked up at the dingy-looking ceiling with an expression of desperation. “What the fuuuuck!?” she yelled out, nearly screaming at the top of her lungs! Her upper lip snarled as her expression quickly changed from fear to showing a powerful appearance of hostility and anger.